My soul longs for the sea...

This is a non-gardening blog entry, so if you’re not into the sea, come back next time…

Went to a press conference yesterday at Bedford Institute of Oceanography, to hear the report on the most recent science cruise using the Queen of the science fleet, the Canadian Coast Guard Ship Hudson. The Hudson and her officers, crew and scientific staff just got back from two weeks off Nova Scotia’s southeastern coast, where they were using a unique piece of gear called ROPOS , a remote operated submersible vessel,to help them study, sample and photograph creatures thousands of metres beneath the ocean depths.

In a perfect world, I would have been out there with them. In another life, I must have been a sailor, a pirate, or maybe only a seagull, but I love the sea wholeheartedly, and love being out on the wide open ocean on an ocean going vessel, be it a Cape Island lobster boat, a Coast Guard fisheries patrol cutter, or my favourite, the good ship Hudson. 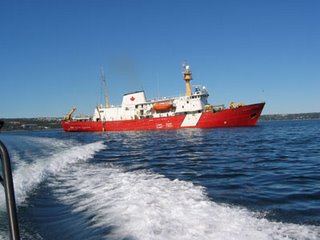 My first trip on the Hudson was three years ago in September, out to Sable’s oil fields, then to the depths of the Laurentian channel, the Stone Fence, and the Gully, where we peered into depths looking for deepwater coral. We also danced a slight dance with a little hurricane named Juan, but we were well out beyond the worst of it, and the Hudson is, in the words of her officers and crew, ‘the best damn sea boat in the Fleet, and likely in the country.” Yup.

Last year, I got to sail with the Coast Guard not once, but twice. First time was on the Hudson again, this time looking at undersea habitat for juvenile haddock. Might sound pretty routine, even dull, but it was anything but. I have held, in my hand, a sea cucumber scooped from off the sea bottom near Sable Island. I have two sand dollars collected from a nearby site, not as deep as some areas of the ocean, but with the brooding, restless shores and shoals of Sable only a few kilometres away. I’ve peered down into depths via computer monitor and unique, marvelous pieces of underwater surveying equipment created by the technical and engineering geniuses at BIO, and seen a universe unlike anything you and I normally can see.

It’s a different world out there, people. We look at the ocean’s gleaming, dancing water with sunlight flashing off the sapphire surface, and we have NO IDEA just how splendid, dramatic, puzzling and wonderful the undersea life and geography is. There are wonders, and there are terrors, and the sea is restless, wild, beautiful...and can kill you just as quick as look at you if you’re not smart. There are dolphins that race along the bows of a steaming ship… 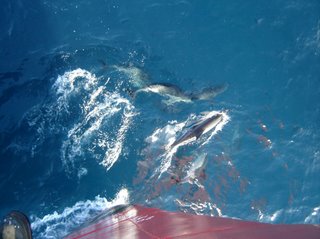 There are flat calm mornings when there’s an oil platform, in this case the Sable Offshore Energy Project’s Thebaud platform, sitting a quarter kilometre away when you wake up and look out your cabin's porthole in the morning... 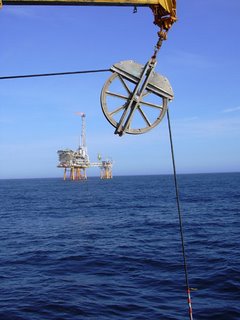 And there are waves that will scare the blessed heart and soul out of even a hardened, hardy, professional sailor.

This isn't one of those waves, but it was enough to take the dust off the deck... 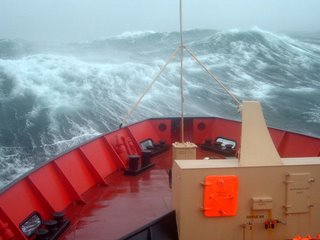 This was on my second trip last fall, on the coast guard patrol ship Cygnus, doing conservation and protection work and also getting tasked on a Search and Rescue call. This was a totally different, but still fabulous experience…I got to operate the ‘sticks’ that control the good ship’s throttle, went from the Cygnus to a fishing vessel in the ship’s Zodiac or FRC, where I got to climb from the FRC up the side of the fishing boat with the fisheries officers on a routine inspection, and oh yeah, discovered I could actually get seasick, if the sea was rough enough and the ship jumped around enough while running INTO the storm on a SAR call…

There oughta be a tee shirt for those who sail on CCGS Cygnus that say, “I got sick on the Cygnus.” Yup, I think it’s a badge of honour—it happens to durn near everyone, except for hardy fish cops who eat beans for breakfast, chili for lunch, and sausages and sauerkraut for supper.

Never mind that. I’d go again in a flash, on either vessel. Or on the Needler, the Cornwallis, the Alexander, the Matthew, even the Earl Grey…or the Terry Fox, or Big Louis, the two great icebreakers that work out of Halifax up north.

These mighty ships come and go from our major harbours all the time, here on the east coast. There are sister ships on the west coast, in the Great Lakes too, and there are men and women who sail these vessels, doing navigational work, running fisheries patrol, doing science work in hydrography, habitat science, and much, much more…and dropping everything at the sound of mayday, mayday, mayday on the radio, to hie off full away to the aid of someone in peril on the sea.

It’s not all glory, adrenaline and excitement, sailing on a Coast Guard vessel. Sometimes it’s deadly dull routine for the officers, crew and staff. Sometimes it’s damn nauseating out there, and sometimes it’s pretty nerve-wrackingly terrifying too. But the work being done out there on the oceans—those same ocean waters that lap at our shores—is critically important, and so many of us know so little about what is done by the Canadian Coast Guard. We ought to feel the same immense swelling of pride when we see one of these big red and white ships that we do when we see the dress reds of the Royal Canadian Mounted Police. Or the Bluenose. The Coast Guard is emblematic of all that is Canada, from sea to shining sea.

That’s my story and I’m sticking to it. And if I get a chance to sail later this year, I’m outa here, like a shot.

Even to the Flemish Cap in November. Provided I’m on the Hudson for that one, however. 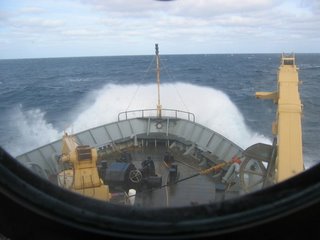