Late Bloom Day: My Internets have been naughty.... 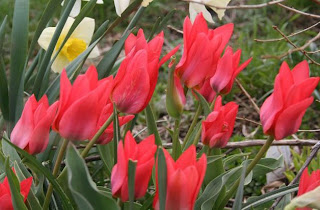 One has to wonder why there are people in this world who have, apparently, nothing more important to do than to create malware programs that attack Internet Service Providers' equipment. Yup, we've been going through another week of fun with our internet. At times, it's been nonexistent. At other times, it's been about dialup speed-not exactly conducive for doing anything more than downloading email--assuming it's all been getting here, of course.

In my mindset, when things like that happens, it's karma trying to tell me something. A project I've been working on that isn't going well? Time to let it go. More importantly, after the wretched day I had on Thursday, it was time for a mental health day of the highest order. So maybe it was a good thing that 'The Internets' (yes, I'm poking fun at Shrubby) decided they needed mental health day too. I spent most of Friday in the garden, puttering--cleaning out weeds, preparing to divide things that haven't already gone skyward, moving a few plants around. Friday evening, Leggo and I went for a long contemplative ride in the woods, where I studied the wildflowers in bloom. Saturday, it rained all day, and today, LSS and I are going to go visit friends for a few hours. Monday is a holiday for some, but I'm going to assume that the now-partially recuperated ISP will continue to work as it has most of the time since Saturday afternoon, and get back to work. 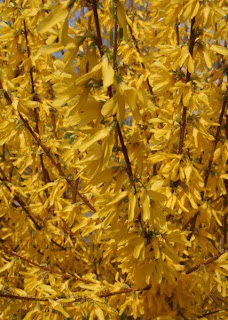 Bouquets of brilliance to all of you who wrote such sweet and supportive notes about our loss of our dear furball friend Tigger. I did indeed plant a catmint clump under the viburnum that I added to the garden for him, and somehow, that brought great comfort to my heart. 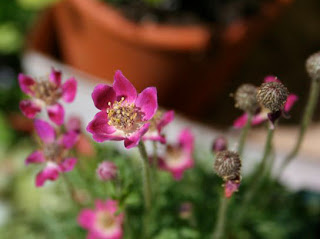 This really ISN'T a proper Garden Blogger's Bloom Day report either; with so much going on, and with our garden being so far behind just about everyone else in the continent, I just decided to show off a few photos to let you know that we, at least, out of the snow zone for the year. And bizarrely, some parts of the province area already extremely dry, though we received much-needed--and cold!--rain on Saturday. 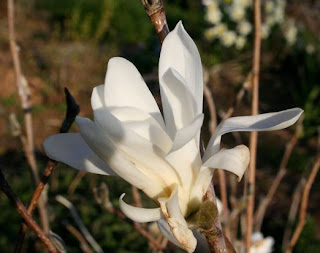 Despite the chilly days we had last weekend and early this week, my Stellata magnolia is just fine, and has covered itself in flowers. They have a slight fragrance, but nothing like some stellatas I've seen. Nor like 'Yellow Bird', which I discovered the other day down at Baldwin's had a lovely lemony fragrance. Still tempted to bring one home... 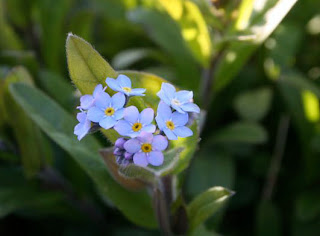 Of course for the next six weeks or more, our garden will be festooned with froths and petitpoints of forget-me-nots, one of my favourite flowers. I like the pink and white ones that pop up periodically in the garden, but the blues are my favourites, of course. 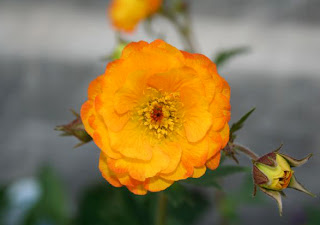 I'm really LOVING this Geum 'Mango Lassy'! It's still in its pot, so it's ahead of the geums in the garden, which are just starting to push up flower buds. 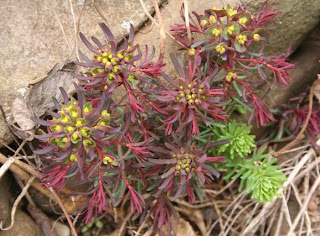 It's not a secret that I'm quite crazy about euphorbias, and while 'Fireglow' is one of my absolute favourites, this would be a close second. It's the well named, 'Fens' Ruby', and with the deep rich foliage and the strikingly neon bracts, it just appeals to my sense of fun. 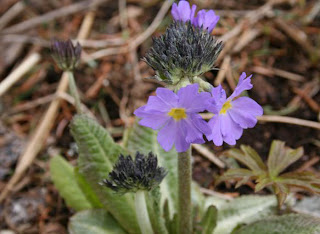 The primulas are just starting to pop in earnest, and this makes me happy. I don't have a huge collection of primulas, but there are probably a dozen different species and colours out there. This purple one is a favourite; now, if I could just remember where it came from and what it's called!

A few more days and I figure everything will be UP in the garden and I can report on mortalities and successes. For now, I'll leave you with several comments:

Echinacea 'Green Envy' is up and doing just fine.
Weigela 'My Monet' sailed through the winter with flying colours.
You already know that I have FINALLY had hellebore successes;

and I have HOLLYHOCKS! Hollyhocks, of all things. Popping up everywhere. Will any of them be yellow? Doubtful. Could this be the year, though, that I break my yellow hollyhock curse?