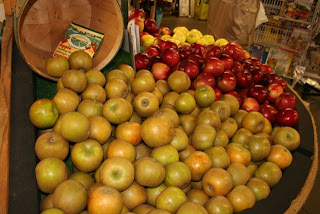 November has decided it's going to REALLY act like the NO-month so far this week. When I got up this morning, it was snowing again, but now we're into the dreary, cold hard driving rain, accompanied, of course, by wind. Great....however, in my green and flowery office it's warm, I can watch the cats watching 'bird television' out the window (and I can watch the birds too.) I have six flowering plants in here all sporting blooms, which helps to chase back the dreariness, and hubby just brought in coffee with cream and a little honey in it--and promises he's baking a pie later. An apple pie, of course, using two beloved old cultivars, Kings and Cox Orange Pippins--I could go into a full fledged rant about overhyped and tasteless apples that are flogged for sale at the supermarkets, but...oh, yeah, I DID just do that, in an article in Rural Delivery magazine about old and new apple cultivars.

So life is fine, just grey outside...

...so to compensate for the grey, and to take a break from my writing assignments and picking out three photos for tonight's photography course class, a little amusement; Theresa tagged me to engage in another meme, and while it's not necessarily garden related, it can be a fun way to get to know our fellow bloggers. I'm actually cooking up a garden-meme but it isn't ready yet.

Before I post my own answers, here are The Rules: I have no idea who started this particular meme, but that's okay, because it's all in good fun.

When tagged, you must link to the person who tagged you.
Then post the rules before your list, and list eight random things about yourself.
At the end of the post, you must tag and link to eight other people.

Okay, here we go with my eight random things:
1. My favourite gemstone is labradorite, a semi-precious stone (technically, a plagioclase feldspar, aren't you glad I told you that???) that is iridescent with colours of the sea, and IS found in Labrador, as well as Madagascar, Finland, and New South Wales, Australia. (How curious is that?) My father brought me some raw pieces of labradorite when I was a kid, and I still have them around here somewhere. A favourite talisman, though probably from Madagascar labradorite, is my heart-shaped stone that I bought in St. John's last year. 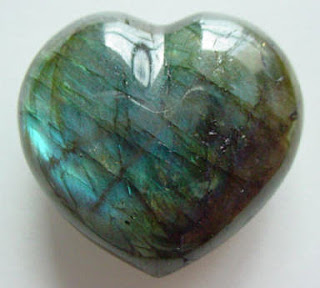 3. One of my favourite foods is cranberries, which we pick wild around here every autumn. Cranberries aren't just delicious, their vines are gorgeous as groundcovers, and this time of year finds them turning deep, rich burgundy in colour, nice for decorating wreaths and centrepieces.

4. My longsuffering spouse not only bakes pies, he helps with housework, laundry, barn chores, builds garden furniture, edges garden beds, cooks some of the meals, and is as cat-crazy as I am. Okay, that wasn't all about me, but he's half of my being...and because I work from home, the fact that he helps out so much is a big deal to me.

5. The only thing I know how to knit really well is heavy socks, using a pattern and wool yarn from Briggs and Little wool mills (celebrating 150 years in business this year!) in Harvey Station, NB.

6. I like cod tongues and cheeks better than lobster--and they're almost equally expensive, cod being as rare as it is these days...

8. I used to be a volunteer firefighter and medical first responder, the first woman in the history of the Canning Volunteer Fire Department. I'm immensely proud of all the volunteer fire departments and firefighters in our province--it's hard enough to run into a scene that everyone else runs away from (a burning building or a vehicle crash)--but to do it voluntarily, rather than as a paid profession? My hat is always off to volunteers, but especially to firefighters.

And now...for my tag victims....we're going to go wildly international!

Debi at Giraffe Head Tree in the southern US (Alabama, Debi? I forget!)
Materfamilias on an island in British Columbia
Ewa's in the Garden near Warsaw, Poland!
Lisa at Greenbow, Indiana
Preetilata is looking out her White Window in India
Princess Haiku creates her temporal beauty in California (should that be Kollifornya, like Ahnold says?)
Candice creates her Postcards and Canvas in Queensland, Australia
And back home in Nova Scotia, Nancy shares her thoughts and images at Soliloquy