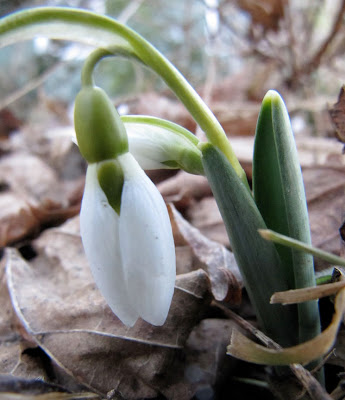 Okay, I know I should build up to the big announcement, but since I'm bouncing gleefully like Tigger (at least, inside I am), I have to announce it to the world...we haz snowdrops! About 2 1/2 weeks earlier than last year, and before spring actually gets here. I am beaming like a proud parent, but of course, I didn't do anything. The plants do all the work. I just reap the joyous benefits. 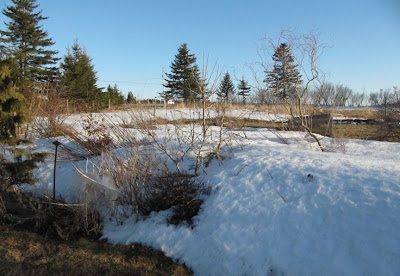 Okay, let's back up a little bit, now that I've gotten that off my chest. Today was the 7th day of sunny skies in a row, and it was above freezing, not windy, and just...nice. I watched it most of the day from inside, where I was dealing with some projects, including the book one.

Late this afternoon, I went outside to walk around and stretch my legs a little, and to just have a bit of a look at the latewinter mess that is our yard. I hadn't looked too closely at the garden since going out a few days ago to cut twigs from shrubs for forcing indoors. Since there is still a LOT of snow in some parts of the yard, I figured it would just annoy me, especially since many of my blogging buds are celebrating snowdrops, and crocus, and daffodils and hellebores, and pulmonaria and ...snif...no, really, I'm just fine. 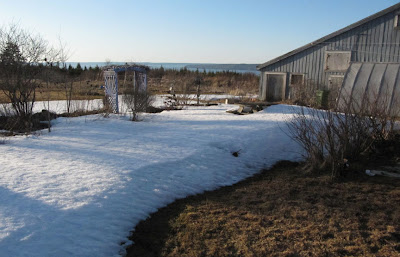 You have to click on these and expand them to get a sense of how much snow remains around our property. The first yard photo is the south side, my view from my office window. There are shrubs totally buried in some of that snowdrift, and I shudder to think how broken they'll be when they emerge. I lost a viburnum last year in this part of the yard, and while some plants weather such snow onslaughts well, I think this year it's time to put in a row of sturdy evergreens to catch and hold the snow from advancing further in future winters. Oh, yes, great plans I have. The spirit is willing, but the muscles are weak. Happily, Longsuffering Spouse is strong, and usually willing.
The above photo is part of the back yard, with the expanse of Scotts Bay and the Cape Split peninsula in the background. Our picnic table has been buried in snow for about six weeks, and is only just emerging in the past few days. But as you can see, the snow is dramatically melting, and is totally gone in some spots. 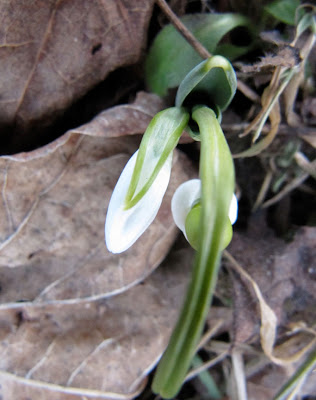 I walked around to the front yard and went to check on the bed where my echinaceas and a fwe other special plants live, and then I spied it. Shy, casual, not at all flamboyant, but gleaming like little oval pearls against the decomposing leaves and potential weeds around it. The first snowdrop. Well, the first two snowdrops. Happy dance ensued. Then I thought about the lower garden, where the flotillas of snowdrops show up eventually. 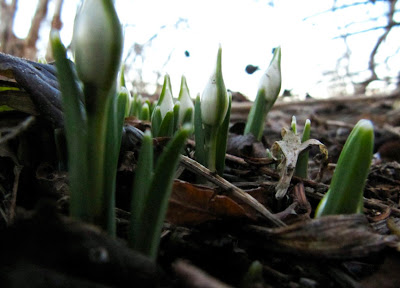 There's still a lot of snow in that lower garden, and I wasn't sure whether I'd find what I was looking for, but there they were. I was so excited that I neglected to take photos of the entire bed. I just put my small camera (my Canon Powershot SX200) on super macro, set it on the ground, and took a bunch of shots, hoping to get something usable. The bed was in total shade by this point but you get the point. The snowdrop celebration has begun.
I'm not ready to declare spring here, though. I know FARCH in Nova Scotia all too well, and she is a perfidious season. We routinely get clobbered with snowstorms throughout March, or ice storms, or rainstorms...but I do feel like we may have broken the back of winter. I'm just waiting for Longsuffering Spouse to come racing inside sometime in the next few days and tell me the Redwinged Blackbirds are back. That's one of my main harbingers of spring, along with my horse beginning to shed his winter coat. And yes, the return of the gallant Galanthus.
Because I'm so gleeful about the snowdrops--hey, I'm actually able to celebrate at the same time as many of my blogging companions around the continent and in northern Europe, instead of trailing along behind like the youngest sibling in a big family--we're going to wait until late Saturday to do the Saturday Spotlight post. I hope to spend at least part of Saturday out in the yard, cleaning up stuff. And grinning at Galanthus.
I hope everyone has something in their yards that make them as giddily joyful as my snowdrops do me. And that spring stretches her warming arms out to all of you this weekend.