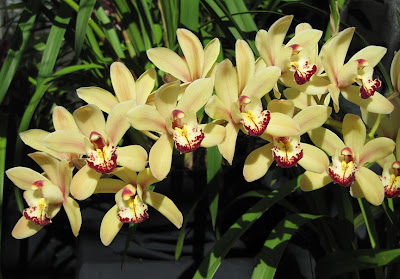 Well. On Friday, the weather decided to throw that Farch snit I've been expecting for several weeks, first bringing us a little snow, then dropping the mercury down well below zero Celsius. I decided to throw an equal though less dramatic snit by getting sick and spending most of the weekend in a befuddled haze, when actually awake. Today, the weather has moderated in temperature though now the snit has converted merely to galeforce winds. I'm over my sicksnit and getting on with the business of well, business.

You may remember I went to an orchid show and sale several weeks ago, as an anodyne to Farch weather, and that a paphiopedilum orchid sort of followed me home. I thought I'd show off some of the incredible orchids AND their amazingly amusing names, just to push back the crabbiness of Farch a little bit more.

I really don't know all that much about most orchids (other than a little about our native species, and a bit about phalaenopsis plants because they keep following me home. Orchids remind me a little bit of cats, purebred horses, or other fancy creatures, in that the naming of orchids "is a difficult matter, it isn't just one of your holiday games..." I'm sure T.S. Eliot wouldn't mind me adapting his Old Possum's Book of Practical Cats into The Orchid Fancier's book of Delectable Names.

Anyway. This delightful creature in the top photo is called Cymbidium 'Stonehaven Cooksbridge.' 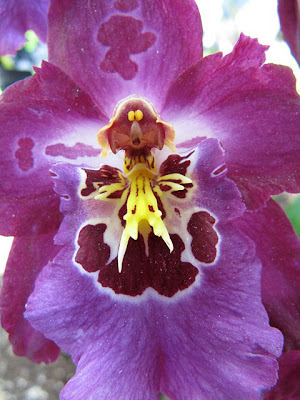 Meet Vuylstekeara 'Fall in Love'. Well named, indeed because I think it's quite easy to fall in love with something this exquisite. 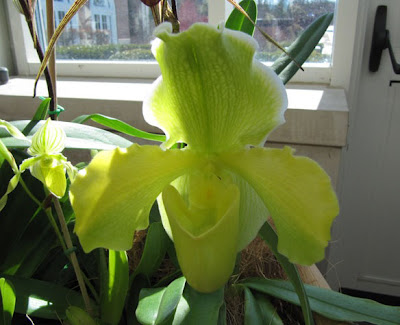 Oh, this is what followed me home: Paphiopedilum 'Limerick x Greenvale x Cherokee.' I have no idea what any of that means other than it's three crosses of cultivars, and that I decided it was time to take the leap to a paph. So far, Limerick is doing fine in my office. 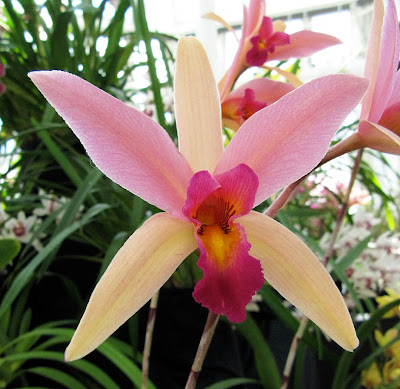 Now this one I understand. Laelia 'Santa Barbara Sunset' seems a great description to me because although I haven't been there (yet), these colours, I suspect, are similar to those of a dreamy California sunset 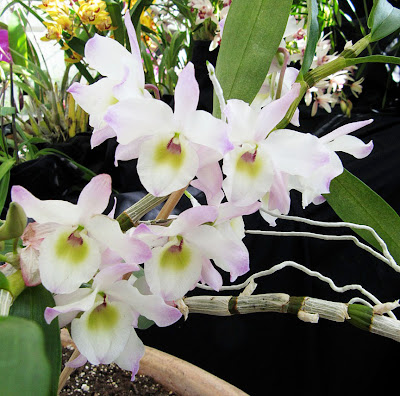 Meet Dendrobium 'Crystal Pink.' The cool thing about this plant is that the flowers are small, about the size of a guitar pick. Alas, I didn't have a pick with me, and I don't want to show the photo of my broken thumbnail beside the flower. Just take my word on this, okay? 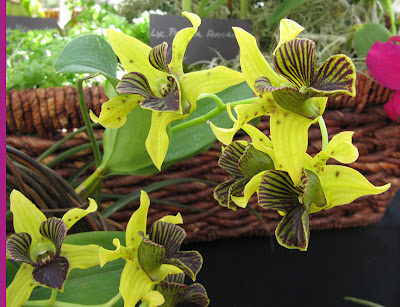 I have no idea who Andree Millar is/was, but how lucky to have a Dendrobium named after her! 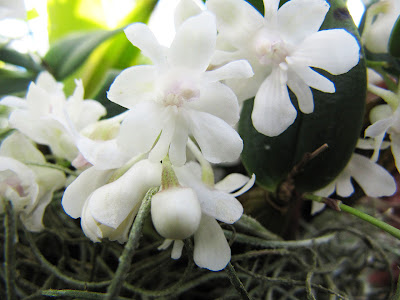 This is Dendrobium aberrans, and again, these are tiny flowers: each one is about the size of a thumbnail. I seem to be drawn to the dendrobiums, but maybe it's because they were faithfully labeled AND I took photos of the labels so I wouldn't just say, "oh, there's a pretty one..." 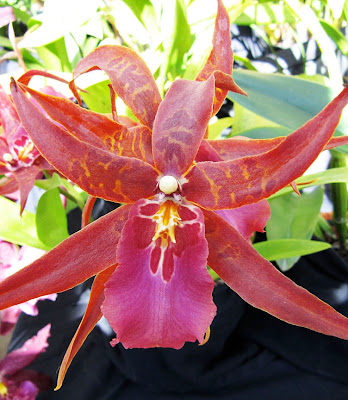 Here's one where the breeder had a lot of fun with the name. Say hello to Degarmoara 'Skywalker Red Star.' It seems to me there were other 'Skywalkers' there, but I could be wrong about that. 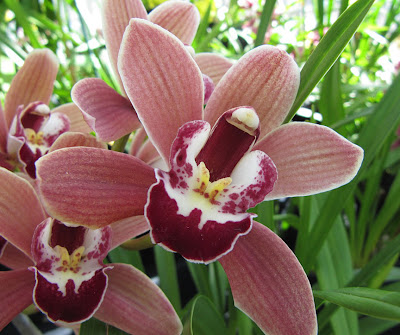 This is a plant that I remember from other years, so obviously its flowering schedule is pretty consistant. This is Cymbidium 'Pelleas Merah'. 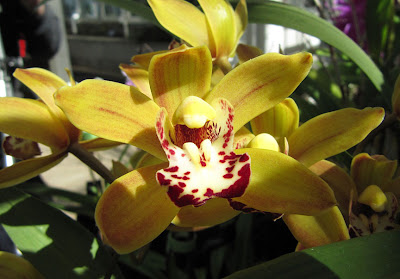 Staying with the Cymbidiums (which I dearly love and want to have), this charmer is named 'Ming Pagoda.' 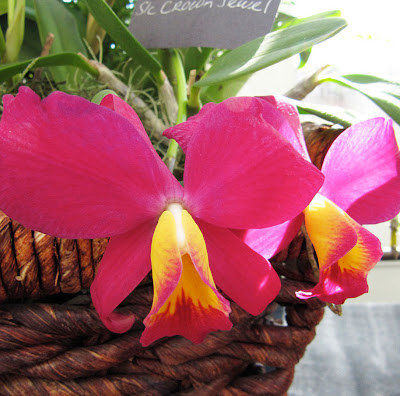 And to wrap up this display of exotic perfection, let's say hello to Slc 'Crown Jewel.' Now. I have NO idea what Slc means, other than it's probably an abbreviation for some kind of crossing of genera. If someone who knows more about them would like to clarify that, please leave a comment, by all means. I don't like being inaccurate with information, but this isn't what you'd call an informative post: it's mostly eye candy to help us get through what's left of Farch, and into what Annie of The Transplantable Rose calls Marpril.
Of course, the coming of April will bring out the T. S. Eliot in me yet again, as I get to quote from my favourite poem ever. And what, do you suppose, might THAT poem be? Dear friends and gentle gardeners, I leave you with that until the changing of the month.