Letters Across the Pond: Of Sandals and Snowdrops 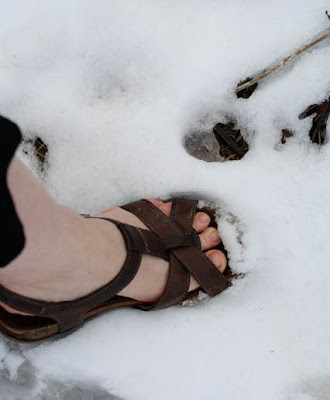 Dear Sylvia: What do snowdrops and sandals possibly have in common? I'll tell you in a little bit. First, let me say again how glad I am that you suggested this correspondence. Judging by the response we have been getting to your first note, others are very glad too. 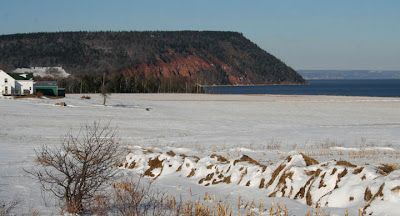 Yes, that was my sandal-clad foot, stepping cautiously across some melting 'glacier' in our yard. We live in Scotts Bay, Kings County, which is technically part of the Annapolis Valley. However, a valley is formed between several hills or mountains, and ours is no exception; the Valley, the agricultural heartland of Nova Scotia, runs like a plough furrow between the North and South Mountains. The North Mountain runs like a dinosaur's backbone along the western coastline of Nova Scotia from just above Digby to its terminus at Blomidon/Scotts Bay. If you look at a map of my province, about half-way up the western coastline, you'll see a little comma of land curling out into the waters of the upper Bay of Fundy, home to the world's highest tides. Inside that bowl is Scotts Bay; the curve of the comma is Cape Blomidon (picture above), where sleeps the mighty M'kmaq god Glooscap (Kluskap). 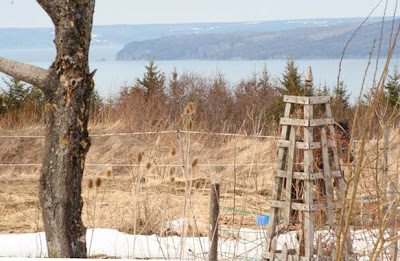 Being on the Fundy, we're subject to fog and somewhat moderating temperatures, as with any marine climate. IN the summer, it's a blessing sometimes; the Valley may be sweltering with temperatures in the high 20s and low 30s C (80s-90s F) but we are often much cooler, if the fog is in. In the winter, we often get much more snow than other parts of the province, because we get so many 'flurries where winds blow on shore; we catch them from all directions, being technically an isthmus surrounded by water on three 'sides', and being on a hill to boot. My garden can be as much as three weeks behind those in the Valley. But there are also milder AND colder parts in the province. Our province is darn near an island, connected to the rest of the continent only by the Isthmus of Chignecto and the tidal dykelands which joins us to the neighbouring province of New Brunswick. A few years of global warming and we may well be an island too. 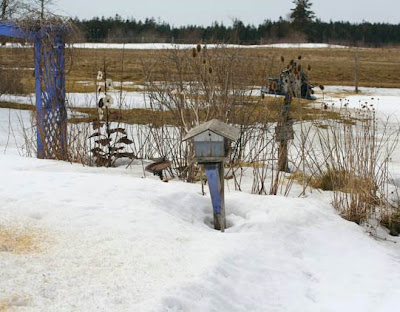 TS Eliot called April the cruelest month, but for us that period runs from mid March until mid May, when spring usually decides to stay with us in earnest. Until that time, she flirts with gardeners, farmers and others. Today, the temperature has hit an astonishing 16 degrees C (about 62 degrees F) and I had been wandering around inside in my sandals. Longsuffering spouse cajoled me into coming outside and walking around the edge of the yard, but I had to walk on snow in a few places. Somehow, that didn't bother me a bit. 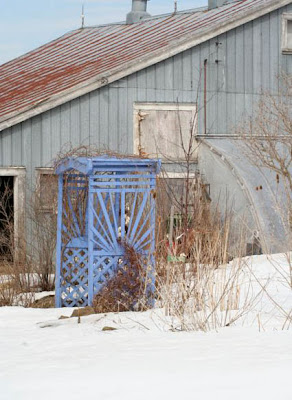 You can probably see that we get a lot of wind; some spots in our acreage are showing bare ground, while in other places the snow is still several feet deep, the result of having been sculpted into huge drifts five feet deep and more. 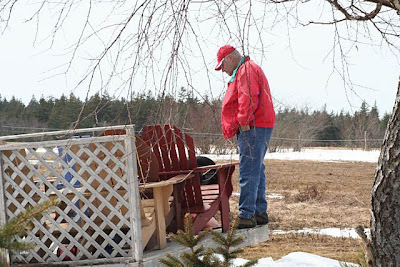 Our land is composed of clay, rock, and springs, all of which conspire together to produce some truly spectacular frost heaving. Here's Longsuffering Spouse inspecting the lawn chairs he built a few years ago. He decided to rope them all together and put them on our little back deck way at the back of the yard, near the pasture. They all stayed put, but the deck looks like it's going to launch into the Bay at any time. It'll flatten out as the frost in the ground subsides and things settle down. 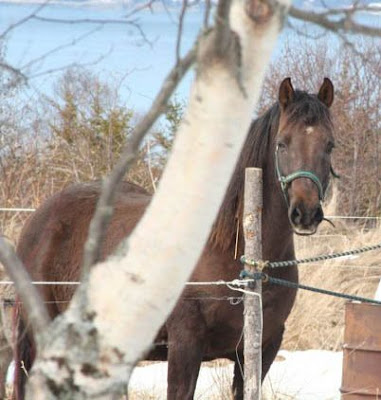 The past two months have been annoying for my Morgan horse, LeggoMyEggo. He has had to stay indoors when it's been icy, and it's been icy a LOT. He's very happy to be outside with his idiotdonkey, JennyManyLumps, and he was hoping I'd come out into the pasture and play Fierce Wild Horse tag with him. Not in sandals, thank you buddy. 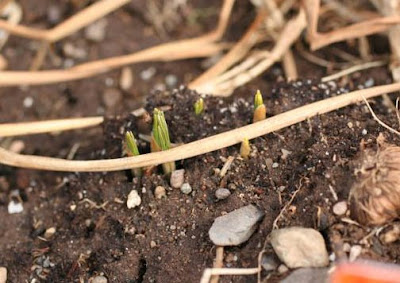 We are a long way from celebrating too many blossoms, although in the Valley there are plenty of crocus in bloom where snows have receded. Generally those spots are south-facing yards, of course. However, tippytoeing around the back yard, I did discover a few valiant shoots coming up in one garden that catches a lot of west light. 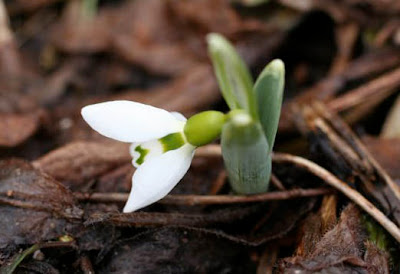 And out front, in the garden with the best drainage, this tiny, valiant Galanthus greeted me. Most of the snowdrops are still buried under two feet and more of snow in the lower front garden, but I've been adding more snowdrops every fall, and this bed is now snow-free.
You can imagine my joy at finding this tiny fellow, barely an inch tall. He was worth the snow in my shoes and the cold feet. And the winter. And the winter yet to come, because it is only late March. But spring blooms in my heart, and I know we'll make it through.
cheers, jodi
PS (Tuesday morning, 31 March.) March is going out-like-a-Tasmanian-Devil, with a snowstorm/rainstorm/icestorm/yuckstorm swatting most of the province for the past two days. It's never boring, our weather!