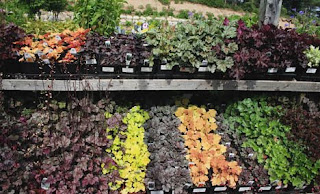 Our favourite Flowergardengirl, Anna, has been holding an interesting conversation over at her blog about small nurseries and bigbox stores, and how customers behave. One of my personal irks is how some people go to a nursery where the staff know what they're doing, pick their brains for information, and then go off to a bigbox store to get plants that are cheaper. This drives me crazy and is the height of rudeness, but we do know that there are many rude and inconsiderate (and cheap) people in the world, don't we?

Now, in some areas, there ARE no good small, locally owned or independent nurseries, in which case the only option is to go to a large store that carries gardening supplies. Yarmouth is sort of like that. To the best of my knowledge, there's no nursery right in the Yarmouth area now; travelling up the south shore there's Ouestville Perennials in West Pubnico, and Lavender Hill, and Spencer's, and Cosby's. To the west, heading back my way, there's Bunchberry Nurseries, and Woodland Farm Nursery in Upper Clements, then Garden of Eatin' Farm in Paradise, and then a deluge more. But all of these are an hour or more from Yarmouth. Several of the big department type stores have very well-stocked garden centres—Canadian Tire and Kent are two that spring to mind—and their managers have been good about bringing in interesting plants and taking care of them. In my snooping about, I've found perennials at both places that I've not located elsewhere, so of course I had to drag them home with me. 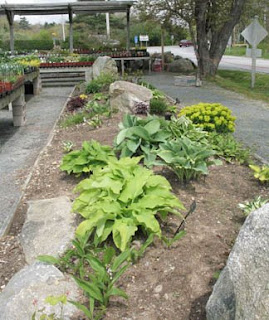 For a lot of us, though, we have some really fine choices, especially here in the Annapolis Valley. Although my blog readership is located all over the world, I do know that many readers are from Nova Scotia, and appreciate knowing where nurseries are. And some of them are getting on the ball and developing websites, which makes it really helpful for web-savvy gardeners who can look at plant lists all winter long, planning for the day when spring warmth entices them out to do more than just look. Some nurseries are supposedly updating their websites, and some have so many broken links that I don't want to include them here. Several lf the nurseries I recommend don't have websites, but that doesn't matter, because they're just so great everyone ought to go there (if you live in or near NS, of course! A bit of a commute from Rhode Island or California or North Carolina, I know...)

Here are some of my favourite nurseries in Nova Scotia. (This is gonna be a multipart discussion, so only a few to start with.

Baldwin Nurseries, Falmouth. I've written about Rob Baldwin before—he's a friend, after all, but that aside, I like what he does and how he does it. He grows a LOT of trees and shrubs, including many natives, plus is getting into perennials more and more, especially those that are good for butterflies and other pollinators. He's going to be at the Saltscapes Expo again this year, (coming up in less than two weeks, panic!)

Bayport Plant Farm, Bayport, near Lunenburg. Of all the plant people I know and respect--okay, worship and adore--Captain Dick Steele is my absolute favourite hort hero. Dick is the spryest, most bright and enthusiastic 92 year old man I know--a man who can propagate plants all day long seven days a week, and barrel his car across the Labrador Highway on his annual plant treks, and charge past everyone else climbing the hills at Battle Harbour, Labrador.

Briar Patch Farm & Nursery, Berwick. It's no secret that I like people who genuinely like plants, and Lee and John Dickie genuinely like plants. It shows at their nursery and farm, which includes marvelous display plantings, intriguing plant choices, and knowledgeable staff. I've found some real treasure there over the past few years, and this year I think it might be time to try the Japanese Umbrella Pine. We'll see how tempted I am when I visit for the first time and see that little plant's glowing yellow foliage. You know what will happen. So do I.

Bunchberry Nurseries, Upper Clements. Jill Covill and I went to NSAC at the same time, but it was many years before our paths crossed again. Jill specializes in heaths, heathers, native plants, evergreen shrubs, and grasses, and if you live in NS, you simply MUST visit the garden centre in early August during the peak of heather bloom. I'm giving a talk down at Jill's next Saturday during her annual opening Spring Fling, and how many plants do you suppose I'll bring home with me THIS time? 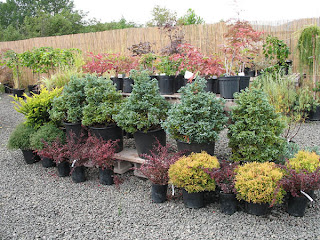 I always say because of Jill I developed an obsession over heathers and heaths, and now that I know I can grow them….well, you know the rest.

Canning Daylily Gardens, Canning. I’ve known Wayne and Wayne for a long time, and value their friendship as well as their knowledge and enthusiasm when it comes to daylilies. 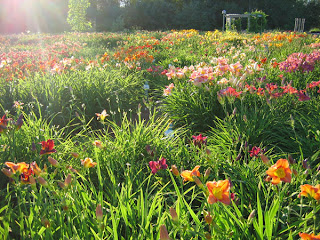 If you live in Nova Scotia and are a daylily lover, you simply have to come visit the gardens during late July-early August, when peak bloom is happening. The Waynes have some really unusual and new daylily cultivars (some of which aren’t ready to be sold commercially yet) and over 300 cultivars for sale; something like 800 different types in the display garden makes for a rainbow of colour.

Ouestville Perennials, West Pubnico Alice d’Entremont’s nursery is the furthest away from my house in terms of travel time, located in the beautiful community of West Pubnico, so I don’t get to visit her nearly as often as I want. 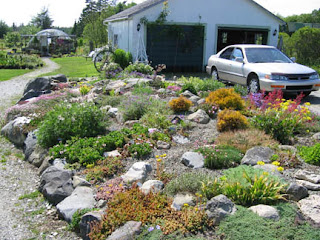 But when I do, I spend a few hours, because Alice is a wise, knowledgeable plant enthusiast and her display garden and nursery make me intensely happy to visit. Usually Mick and/or Angie, the two guard cats, escort us as we meander around. And I invariably leave with the car full of plants that I simply had to have. You’ll find many interesting and hard-to-find plants at Ouestville, so it’s a collector’s delight, but there’s something for every gardener. Trust me on this….