Feeling the kiss of the sun--and the ouch of the muscles! 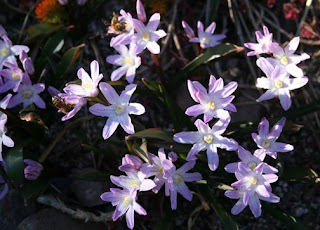 We've just had the second of two warm days up here on the mountain. Yesterday, I had no time to go outside and play, so I convinced myself it was better to let the yard dry up a bit more while I slaved away indoors on my assignments and projects. Today, with some things under control, and having had to go to pay my respect's at a friend's father's wake, I figured the garden needed me for a little while--and I needed to be with it. So with my intrepid assistants Tigger and Mungus (on his harness) in tow, I headed out to see what new surprises might be seen. 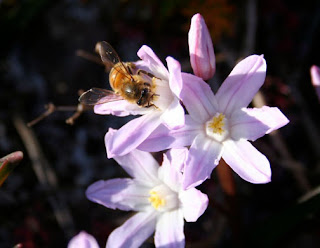 Not only have the pink chionodoxa opened, but there are pollinators out and about already! Good thing we also have the hamamelis in bloom, and a few more days like this and the poplars and red maples will be starting. It was just SO nice to get up close to this bee for a photo. There were at least half a dozen of them around, and that was simply music to my ears. Especially since the frogs are still silent. A look back at past years shows that they've been this shy before, so I won't panic. 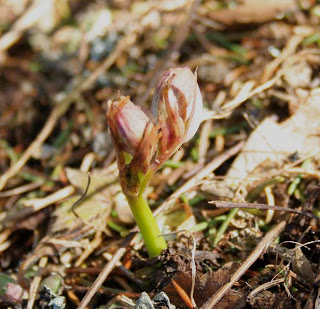 Well, whatever might THIS be? Hmmmm...imagine my surprise when I saw the tag-Helleborus purpurascens. I bought this plant several years ago, and thought it had shuffled off its mortal coil and become, a la Monty Python, an ex-hellebore. But no! It must have just grown leaves last year quietly, in behind the more boisterous plants and gotten strong enough that it.IS. GONNA. FLOWER. Whoo hooo!

Watch the weather gods dump some enormous cold front or seven feet of snow on me for this. 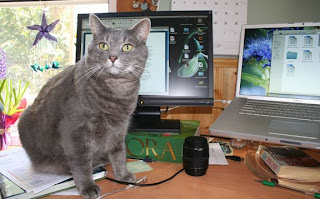 Although we spent only a couple of hours outside working, we accomplished quite a bit (one bed at a time, remember!) and after going back to work for the past six hours, (and not sleeping much the past few nights) I'm actually pretty tired out. So I'm going to listen to Spunky Boomerang, my personal office assistant, who has been trying to get me to go upstairs to bed for some time...good night, all!