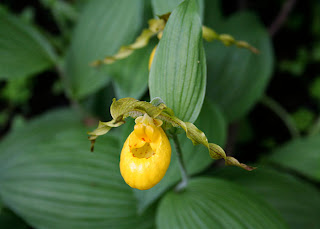 Woke up this morning, looked at my computer, looked out the window, and declared to my long-suffering spouse, “I’m taking the day off to go see Dick. I’ll be back tonight sometime.”

LSS nodded. He had plenty to do, lots of local strawberries and cream in the fridge to sustain him when he got hungry, and so he waved me off a little after 930.

It’s only about 130 km from my place to Dick’s, and you’d think I’d get there more often than I do. I wasn’t sure what sort of reception I’d get on arrival, or even if he’d be there. But when I went to the header house door and asked the two young fellows, “where is HIMself?” , they nodded to the potting room behind them. I tiptoed through the greenhouse, stuck my head in, and said, “Is it safe to come in?”

“Get in here, girl! Good to see you!” Big hugs all around. 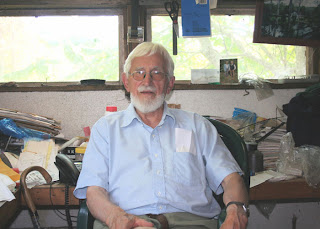 Those of you who don’t live in or near Nova Scotia probably haven’t had the pleasure of meeting Captain Richard (Dick) Steele, C.M., D.S.C. If you haven’t, perhaps you have gotten a glimpse of this living legend if you’ve seen the episode of Recreating Eden that was done several years ago. (I still haven’t seen it, and must track it down.) Dick is a retired naval officer who served in both World War II and the Korean War, and has seen much more than most of us can even imagine. He’s now in his early 90s but looks and acts 30 years younger, and he is the best plantsman I’ve ever met, as well as a gentleman and a fun, wise, and generous soul.

Here’s an excerpt from the episode of Recreating Eden explaining Dick’s reasoning for gardening:

In the Korean War, Captain Steele was Commanding Officer of HMCS Nootka, when that Destroyer served on both the East and West coasts of North Korea. In these northern enemy waters they held and protected all of the Islands and spent many long, cold, grey, dark winter months facing dangerous and at times quite furious weather.

However, upon returning to Sasebo harbour in Japan, just as the sun was rising on an early May morning, all the rice paddies up the hillsides were light, bright, and shining green. Clean and vibrant new color was creeping out everywhere. Upon seeing this wonderful sight, Steele said to his key helper, "Off-You-Go ashore and round up lots of good bright color for my cabin". A delightful and competent Flower-Lady was found who quickly and thereafter, whenever the Nootka returned to the Base, kept the Captain’s Cabin awash in many hued flowers.

It was from these episodes that Steele fully realized how much Nature’s colours can soften the harsh and gruel stress of difficult times. But this was still not enough. Surrounded by the brutality of war, Steele soon needed to find regular escape from the aggressive, combative military atmosphere, so would work from 6am-4:30pm and then change out of uniform and seek a garden to go to relax, unwind and replace the horrendous visions of war with a kind of serenity only a garden can provide.

A founding member of the Atlantic Rhododendron Society and recipient of the Gold Medal of the American Rhododendron Society, Dick has been all about plants for over fifty years. In 2004 hewas named a member of the Order of Canada for his outstanding contributions to horticulture in North America, particularly in his work pertaining to hardy rhododendrons, azaleas, and other ericaceous plants. Bayport Plant Farm, down behind Lunenburg, is home to some 30,000 (or so) plants, including many rhodos, choice conifers, magnolias, unusual perennials, rock garden plants… 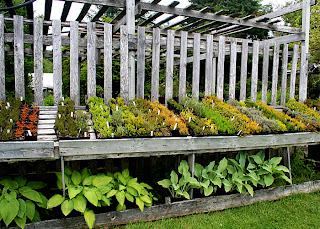 There are only two plants I know of that Dick doesn’t like: goutweed, and Japanese knotweed. Good choices, both of them. And he can propagate, grow, plant and move any plant, I'm sure of it. The lovely lady at the top of this entry is Cypripedium calceolus, better known as the Yellow Lady's slipper--known only to grow natively in a couple of parts of Nova Scotia, including the threatened Avon Peninsula Watershed, but grown masterfully and happily under some conifers at Bayport, too!

And it’s in no small part because of his enthusiasm and encouragement that I’ve gotten into heaths and heathers as well as rhododendrons and azaleas—in a very small way, compared to many in this province who are ardent collectors and growers—but I’m a bit plant-fickle…I love just about any plant too, other than the dreaded evil bad goutweed.

We spent several very pleasant hours drinking tea and catching up, and I committed to going on his annual plant-hunting expedition to Labrador in September. We didn’t go up through the hills of the farm today; instead, I contented myself with strolling around the nursery part of the farm and talking with Diana, Dick’s daughter who manages the garden centre part of the farm. 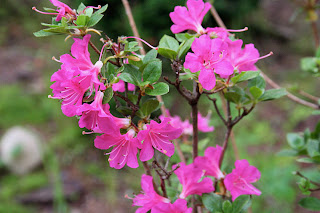 They have some amazing plants here, many of which you’re unlikely to find anywhere else—some, of course, they’ve bred themselves, like this lovely azalea (currently named RSF 81-011).

The plant material they collect in the Labrador (usually seeds) is propagated to develop new, hardy and interesting plants for gardeners, especially those who like ericaceous plants and alpine/rock garden specimens, and is added to the ever-growing collection of specimens from all over the world. Of course I spied the heaths and heathers, though I restrained myself and only bought three; but then a gentian-like campanula, several sedum and hosta caught my eye, and this amazing, delicate yet robust Bolax glebaria (originally from the Falkland Islands, apparently). 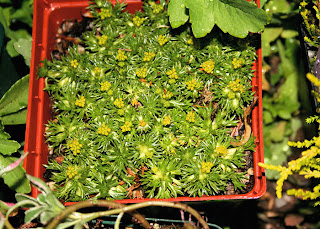 It reminded me of an alpine dianthus, although these little yellow knobs are its flowers—insignificant, but the plant is very cool and is going in my concrete planter!

After I left Dick’s farm, I headed for Chester, and two interesting nurseries there—but they’ll have to wait til next time, because now of course the deadlines are calling me again…