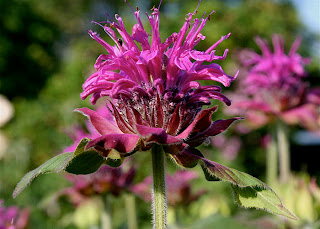 This was one of those really busy days but also one filled with delightful surprises. To start out the day, I went off to Medford to pick 16 pints of raspberries at the U-Pick, while Longsuffering Spouse worked on the painting of the house. It's going to look wonderful when he gets it done--which in this heat is taking longer than he had expected. 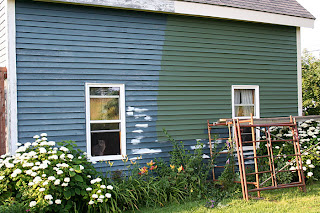 To keep him encouraged, I made up 10 pints of raspberry freezer jam which is his favourite--next to peach and blackberry. Pity we don't have any raspberry wine--except for the Monarda of the same name at the top of this entry.

This afternoon we were visited by some 50 gardeners from Clementsvale and Annapolis Royal; people I met during talks I've given in the past number of months. 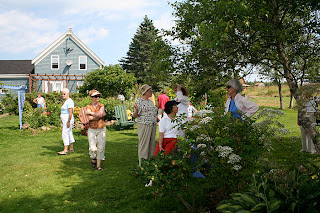 I've never had a garden club visit before, and I was a bit nervous but also glad to welcome them. It's always interesting to see what catches other people's eyes, isn't it. Several raved over this Chinese delphinium. 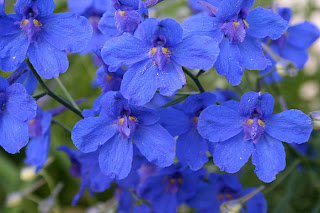 Others were ga-ga over the poppies, which are still flamboyantly doing their thing in a host of colours. More than one asked me which hydrangea this is, and I simply said, "one of the blue lacecaps--because I don't know." 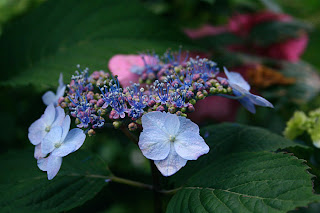 Blue Billows, Blue Bird, who knows without a tag or good notes? Since they'd just come from Canning Daylily Gardens, they weren't at all surprised to find me with a host of daylilies in all shades. But more than one person was intrigued by the chocolate foxglove, Digitalis parviflora, part of my chocolate and wine garden. 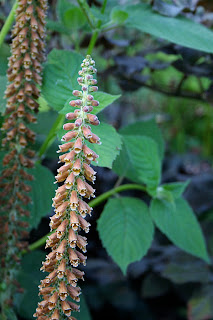 A number of folks exclaimed over the clematis, especially this one, which is about nine feet tall, and has a few flowers on it. 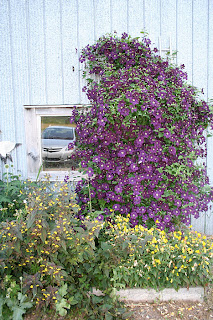 One of the visitors told me she thinks it's Polish Spirit, because of its deep wine colour, and that rings a bell with me. Whatever it is, people were amazed. But I said it's not my doing; Thank the mushroom compost, the fog, the kelp meal, and straw mulching, not me!

After our guests left, I went out to harvest the tomato crop. Such as it is. 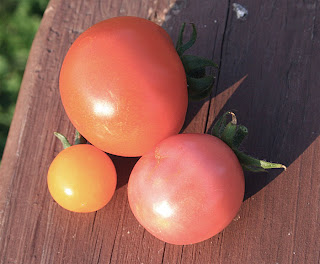 Okay now, stop laughing, all you tomato growing whizzes. In my defence, I picked them because I couldn't stand it any longer. And no, your eyes aren't deceiving you; we have a gold, a pink, and a not-quite red ripe one; Gold Nugget, Thai Pink Egg, and I believe the red one is Harmony. I could only take one photo...because to paraphrase the little cat, "I eated them!" I'll put the Seaboost to the plants now and get them moving on their cropping, encouraged by all the tomatophiles out there who grow such nice plants and fruits.

Someone asked me why I don't put out saucers of beer to trap slugs as they noticed a few holes in plants. Well, the truth is, a few holes in my hostas or depredations by rose sawworms or aphids on the honeysuckles don't bother me all that much. I hose down the honeysuckle a couple of times each season, but mostly just let nature--in the form of ladybird beetle larvae and other munching predators--do their thing. I HAVE been watching carefully for an outbreak of the white tussock moth caterpillars, but have seen only one--and if we do get a pile of them, the garden will just have to suck it up and handle it.

Because there are more important things to take care of than bad bugs. Like good bugs. Like bumblebees, 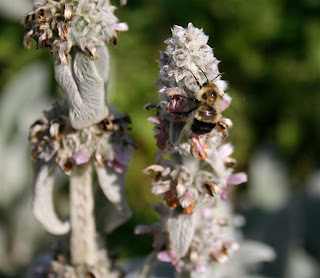 And spangled Fritillary butterflies, (click on this to enlarge it--and tell me he doesn't seem to be looking right at the camera! Just wait til my macro lens gets here, if you think that is fun!) 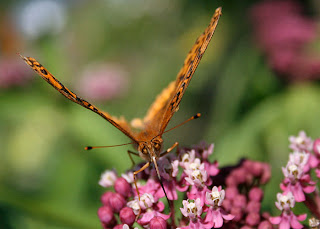 and most importantly of all...the visitors I found on the rosy milkweed, or swamp butterfly weed (Asclepias incarnata.) 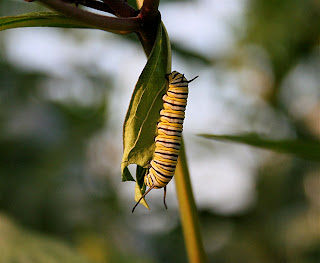 Jubilation! They're here, and they're munching. The monarch caterpillars have hatched! If you'd been in my back yard, you would have seen me doing a little happy dance when I saw a dozen or more of these little darlings munching the rosy milkweed. Eat all you want, guys, there's lots. Eat hearty. Grow big and strong.
Isn't it nice that something so small can make a person so happy?