It's that time again already! It's Garden Bloggers Bloom Day, as started by the clever and delightful Carol of May Dreams Garden. It's Half Past August, a Quarter to Fall--and here's what's going on at our place! 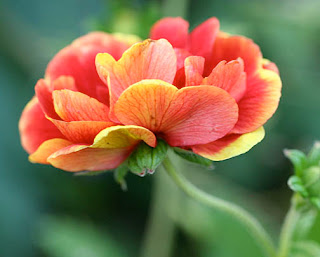 This and the first image is a perennial potentilla, Arc en Ciel--I also have one called Fireball but the flowers are much smaller. These come in shades of red-orange with yellow in the mix too, and they catch a lot of attention even though they're in among the coneflower herd. 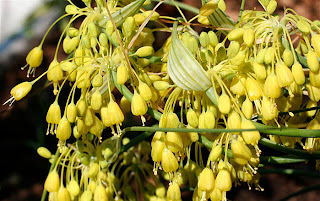 I'm just catching on to alliums, although I've been growing a couple of them faithfully for several years now. The bizarre "Hair" is a favourite because of its odd spiky tendrils, but I like the small yellow fireworks of this one too. 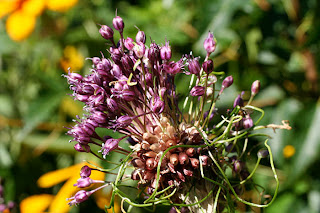 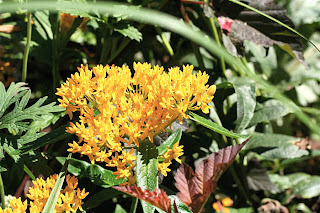 I don't know if the monarchs just haven't found the yellow asclepias yet, or if it's not really to their liking, but so far it's remained unscatched. I can't find the orange one, but it's possible I weeded it out, thinking it was something naughty! 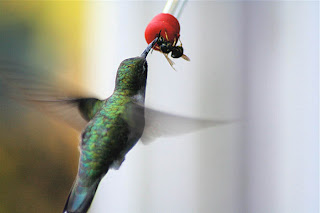 Although the light wasn't quite right and I should have used my tripod--I couldn't resist including this photo of a hummingbird facing off with a wasp! It's very bizarre to see the wasp turn and face the hummers, and then CHASE them--but they all share eventually. 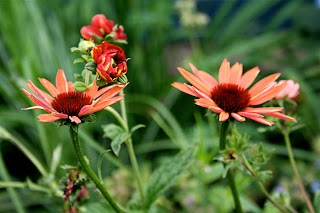 You didn't think I'd get through a post of flowers without at least one coneflower, did you? Of course not. Here's Sundown, also known as Evan Saul--I can finally tell them apart because SunSET has a unique lavender cast to its older flowers in cool climates, according to Tony Avent of Plant Delights Nursery. 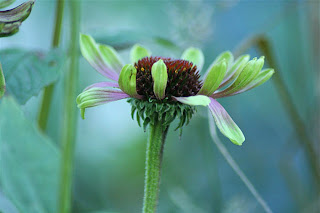 And of course this is my favourite plant this year, the well-named Green Envy--which elicits just that response in most who see it. 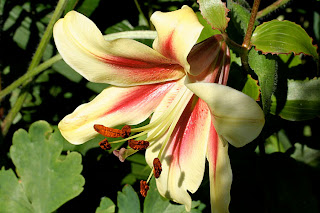 Oh, this is a blissful plant! It's an orienpet lily, a cross between oriental and a trumpet, but I can't remember what it's name is. It's fragrant, it's elegant, it might be Caravan (I'll see if I can find my notes from last year). 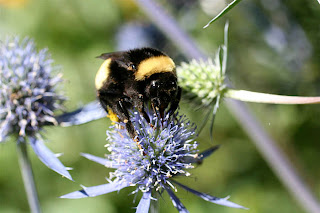 I figure that Bloom Day ought to include some of the creatures that our garden relies on for pollination--and which they rely on for food. Here's one of our happy, fat, bumblebees. Okay, yes, I'm anthropomorphizing. It's my blog and if I want to assign moods to bees, I will. Nanner nanner nanner blttttt! 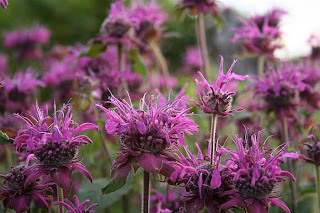 We have a lot of bee balm, mostly in strong colours like red (Jacob Cline) raspberry (Raspberry Wine) and this (Bluestocking). I didn't realize that's what this was until the Bluestocking I bought this year flowered--and looked exactly like this large clump of Monarda. So now there will be two clumps. 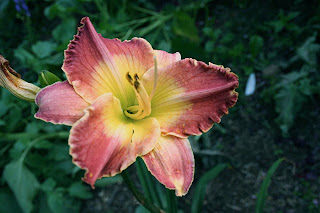 As part of my wine-and-chocolate garden, here is Days of Wine; our daylilies are still going strong here on the mountain, and the everbloomers will keep going until frost. This afternoon I took a walk around the back field looking at wildflowers and other things that interest me, and paused by the pond to watch dragonflies. I didn't feel I had time to sit and wait for a dragonfly to land near me...then when I went back up to the house, here he is, hanging on the autumn clematis!

I have deadlines on the go here, so I will stop for now; but I'm going to do a part 2 to my Garden Blogger's Bloom Day post--and that will be some of the native/naturalized plants that grow around our place. Happy Bloom Day, all!