Storms, computers, and other dramas 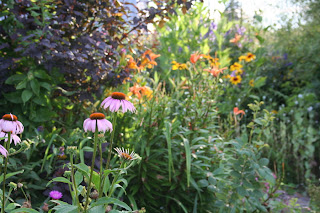 When I called my longsuffering spouse from Halifax yesterday, I told him I was having a Monday. “This is Thursday”, he pointed out.

Nope. It’s been Monday all week.

My MacBook Pro laptop has been having issues, and we thought it was fixed Wednesday…only to have me go flying back into Halifax again yesterday. I left the dear thing at the shop overnight, hoping that it would manifest its odd behaviours for the technician. But it’s been acting like the frog in the Bugs Bunny cartoon, the frog that sings and dances in front of one person—and when presented to an audience sits there and goes ‘Ribbit.’ That’s my laptop—misbehaving for me, and acting angelic for the technician. So I’m running three days behind in work, but figure it’ll get caught up over the next couple of days.

To add to the fun, we’ve been having a spot of weather. First, we had a joyously profound drownpour of rain on Wednesday evening, followed by wind all day yesterday. Quite a bit of wind. Not the wicked Suête wind of Cheticamp, which can hit nearly 100 miles an hour on a regular basis, but an impressive bit of wind in its own right. It did some pruning in the garden, and not necessarily the sort of pruning that is appreciated—knocking down some of the sunflower ‘trees’ (freerange selfseeded sunflowers that grow up tall and thick-stemmed and multi-flowered), throwing an obelisk bearing a blue-flowered Clematis integrifolia ‘Caerulea’ over onto some iris and darmera, rumpling all sorts of parts of the garden and just generally being a pain. Because I was preoccupied with computer dramas, I didn’t really view the yard until later today.

Between the computer headaches and the weather and some bad news about aging relatives, I suddenly was caught up in a case of the pre-autumn blues. The garden that looked so fresh and lush just a few days ago seemed ‘bewiltered’ and the coolness of the air following the storm has that inimitable whisper of autumn in it. Even though I know we have weeks to go before the equinox, the lessening of the light and the changing of shadows and sun patterns in the yard further casts me into the doldrums. And ironically, the no-see-ums are still vicious, way worse than mosquitos or blackflies ever thought of being up here, and when I went outside to take some photos I was actually driven back indoors by the tiny and voracious insects.

However…despite a need to deadhead, trim, tidy and weed, the garden also cast a balm of comfort over my soul. In part it came from rejoicing in the tiny details of the plants and their neighbours in our yard. Doing this requires me to really slow down and look—and see—not just glance, but really SEE the marvels of the garden. 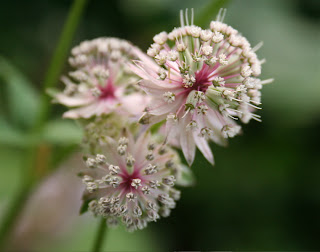 Or the wealth of colours in a Venidium blossom’s centre… 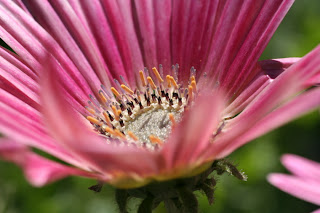 The blind hunger of a monarch caterpillar chewing down a milkweed… 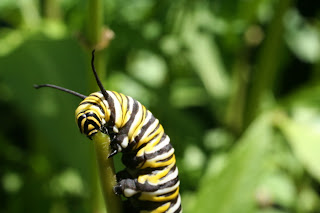 And the rainbow of light on a spiderweb. 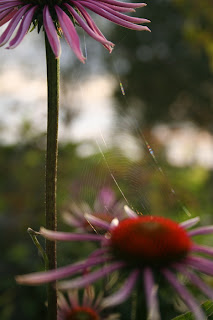 Though some flowers are winding down their life and turning to pop art seedhead sculptures, 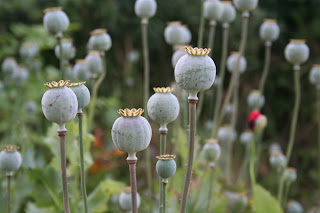 Other plants are embracing the summer by sending up bright new growth, like this Nishiki willow twig. 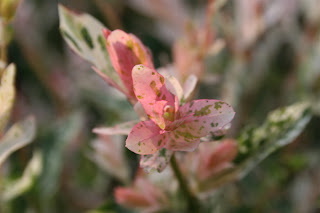 While the rich gold of pollen (here in a daylily’s heart) promises food for birds and insects, and indirectly (through honey production) for us humans. 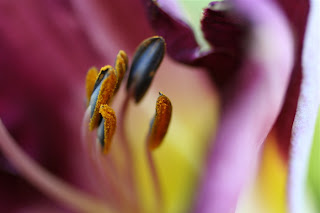 Hope is rekindled in a garden, watching the endless cycle of birth, death and rebirth. To heck with the deadlines, and all the things that haven’t gotten done the past few days. Tomorrow, weather permitting, I’m spending the day in the garden regrounding myself and restoring some sense of inner equilibrium. Whacking weeds or rejoicing in caterpillars will do that to a person.

If regrounding ourselves isn't a good reason to garden...I don't know what would be.