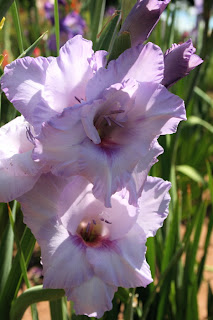 This afternoon on my way back from several other appointments, I stopped in at Murray Salsman’s home in Grafton, NS, behind Berwick. One of the things that makes me particularly happy is when people use their gardening skills to do something that will help others. Murray’s that kind of gardener. His property is home to Marg’s Glad Garden, a memorial garden he built for his late wife Margaret, but also which helps many people every year.

Margaret died of cancer in January of 2004 but she loved to garden, and she and Murray always worked together in their flowerbeds. Her favourite flower was the gladiolus, and Murray decided to plant about 3000 bulbs in her memory, the spring following her death. Then he got the idea to use the glad garden to raise money for the Cancer Care Patient Navigator program, which helps cancer patients and their families when they are dealing with financial difficulties around treatment, etc. And the funds raised go to help patients in Kings and Annapolis Counties—not to fund some research program or some heavily bloated fundraising bureaucracy somewhere else. Marg’s Glad Garden has helped many people since its beginning in the spring of 2004. 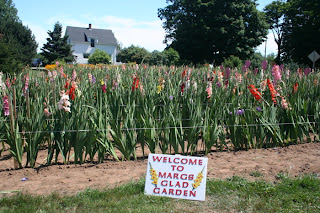 This year, Murray and a host of helpers planted around 10,000 glads in early May, and now the garden is open for people to come and visit. If they make a donation to the fund, which is a registered charity, Murray cuts them a bouquet of his gorgeous glads, which come in almost every colour conceivable. Already there has been a steady stream of visitors come to wander through the plantings, make donations, and receive their bouquet of flowers. Murray also has paintings and photographs of glads, taken or painted by Nova Scotian artist Sandy Moser, for sale, and naturally I bought the photo of the hummingbird inside a glad blossom to add to my wall of floral art!

Incidentally, I wrote about Murray and Marg’s Glad Garden last year for Reader’s Digest magazine, (it was in the October or November issue in Canada) and as with anything like this, I always hope that telling the story will spur someone, somewhere, to try something similar. I am a firm believer in helping local people, whether it be purchasing local plants or farm produce or donating to a local charity, so this to me is a good thing to do.

When I got home I went out to the memory garden to look at plants. Since another garden club is coming to visit tomorrow, I thought I should tidy up a bit. But I got as far as the back perennial bed, looked at the Rosy butterfly weed (Asclepias incarnata) and stopped in my tracks. 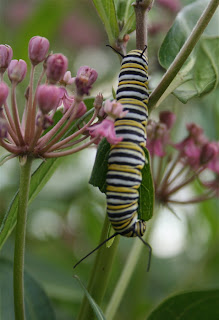 Remember the other day there were a few little monarch caterpillars having a snack?

Well…I counted about 5 dozen caterpillars in all in the three clumps of asclepias. Most of them are big already, (and the asclepias has taken quite a thumping, but that’s what it’s there for) and will probably be going to pupate in a matter of days. I’ll have to tippy toe around looking for a chrysalis, as I’ve never seen one in the garden. 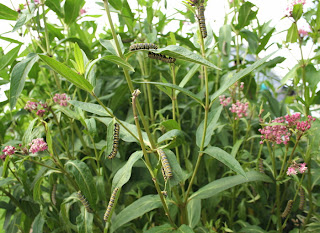 One of the reasons I have grown to love butterflies so much is because of their remarkable life cycles, and how we can create metaphors for our own lives by watching and learning from them. I never got the weeding done…I spent an hour or more watching the caterpillars munching through the milkweed leaves, and taking photos…and then being visited by this adult female monarch. 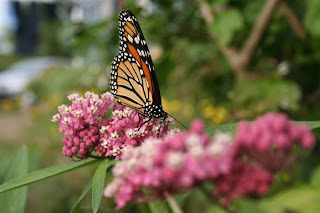 She seemed completely oblivious to the caterpillars chewing their way around her—she just probed through the flowers and fluttered around.I think she was just dining on nectar, but maybe she was also getting ready to lay eggs. I haven’t seen a male here yet, but I’m sure it won’t be long now.

Earlier today my longsuffering spouse had asked worriedly about the tussock moth caterpillars, which we don’t care for because last year we had a population boom of them that stripped quite a few plants, and I actually broke out the Bacillis thurengiensis—until I spied monarch caterpillars, at which point all hostilities ceased. This year, I’ve seen maybe a handful of the pesty moth caterpillars, and I think the explosion of them last year—or the cold winter-- meant a bust this year for them. Even if there are a pile of them around, they’re going to get stomped, or snipped in half, or picked and thrown in soapy water, not sprayed, not even with soapy water…don’t want anything to disturb “my” brood of munching monarchs-to-be.

Somehow, after having been to Murray's and making a donation to the Memorial Fund, coming home to monarch butterflies and babies seemed really appropriate. Marg would approve too, I'm sure.