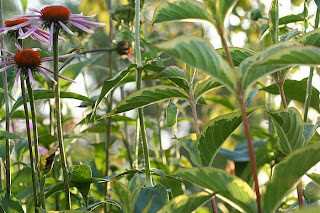 This morning my longsuffering spouse announced that I should go down to the Bay and check out the hay in a field where his nephew was working. Blaine wanted to make sure the quality was good enough for horses, and it certainly was. Now, for those of you who are accustomed to haying in June or July, relax. Down in the Valley the horse hay has been done for weeks, and in fact second cuts are well underway for both hay and silage. But here on the mountain, where things are cooler and more moist, we always get our hay in August. It’s excellent quality and the happy horse and hapless donkey always enjoy it.

While I was waiting for Blaine to bring the first load up, I walked around the garden to see what was new and exciting. Another blast of wind last night had knocked over a wooden obelisk in the back garden, and I was going to pick it up, when I spotted something wonderful. A monarch caterpillar, hanging in the ‘J’ position. I got very excited , even though I realized that now the arbour is going to have to stay resting as it is for the next couple of weeks. 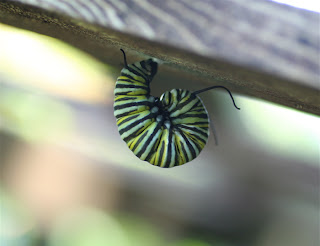 Monarchs (and other caterpillars) attach themselves to a twig, leaf or other object with a pad made of silk and then hang down, head first (like someone doing yoga.) Then they go into their fifth and final moult, which is the amazing one. As one website describes, when the caterpillar sheds its skin this time, it looks like a giant green water droplet, the chrysalis. It’s now beginning its pupation, the stage where it turns from a ponderously slow eating machine to a graceful, flying butterfly. 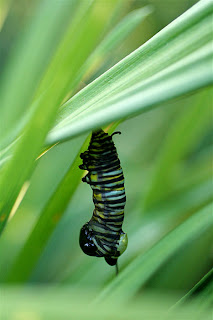 When I went out at suppertime to get ready to bring in the rest of the hay, our J-shaped caterpillar had done its magic, and was a glistening, glorious green sac. I sat on the ground transfixed by this, the first actual monarch chrysalis I’ve ever seen (except in photos and books and websites.) After the hay, I ran for my camera, and now that I knew what size to look for, I went looking carefully (from outside the border) around other plants for similar shapes. 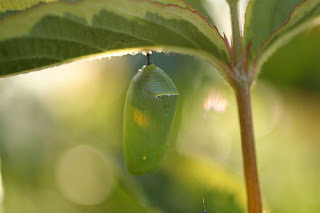 And there were all kinds of them. Caterpillars hanging in the J-position, and a number of chrysalises (whatever the plural is) festooning a weigela shrub, daylily leaves, hosta leaves…sunlight gleaming through the translucent sacs—I could even see stripes inside a couple of them. 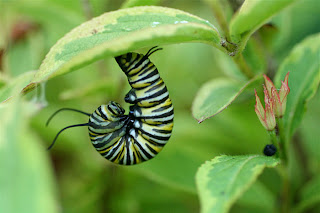 Now, I realize that monarch caterpillars pupate by the millions every year…but I’m no less awed by a marvelous feat of biological engineering. 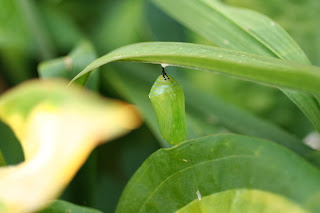 And when I went back to check the big milkweed plant, I found a few eggs on the underside of some of the upper leaves...and the cycle continues.