Always making an aster of myself 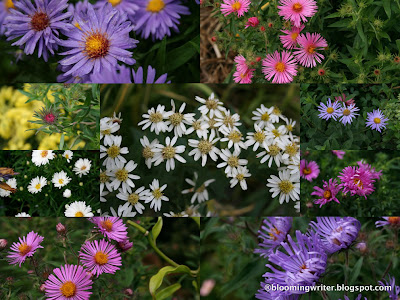 The beginning of aster season is always one that finds me with a mixture of delight and dread. The delight, of course, comes from the fact that asters are floriferous, colourful, and present a wonderful flourish of colour when many gardens are starting to wind down. 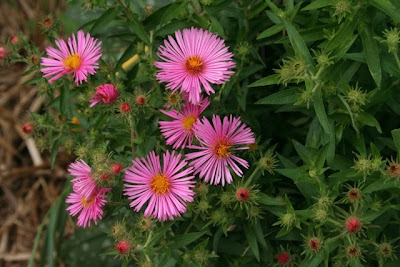 It goes almost without saying that the dread comes from the fact that they are one of the finales of the main gardening season. They're a valuable part of what Nancy Ondra and Stephanie Cohel refer to as 'Fallscaping', in their wonderful book of the same name: focusing on designing your garden so that autumn is one as rich with colour and texture as spring or summer. While part of me loves the cooler weather and the richness of autumn colours, there IS that part that quails at the thought of winter. But we're focusing on the good things today, and asters are one of the joys of the fall garden palette. 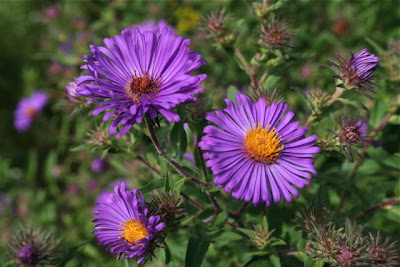 One of their charms for me is how their colours are quite different from many shades of September. At a time when foliage on shrubs, hardwood trees and some perennials, along with many of the flowers still blooming in this month, are alight with bronze, copper, gold, crimson, orange and red, asters erupt with sometimes cooler, sometimes even hotter shades. This purple New England aster in my friend Jerry's garden is a perfect contrast to the brighter yellows and golds echoed by its central florets. 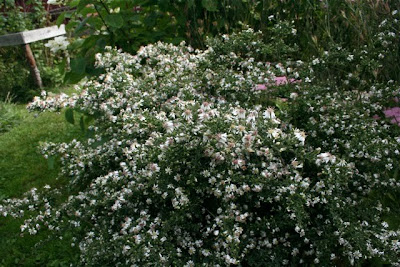 I like white asters for their cooling appearance, and in the case of the calico asters (A. lateriflorus), the tiny flowers that festoon lateral branches of these plants can almost completely cover the plants. Despite the tiny flowers, the calico asters are one of my favourites, reminding me of pagoda dogwoods or the plicatum tomentosum viburnums such as 'Mariesii' and 'Summer Snowflake', with their layered, lateral-branching effects. 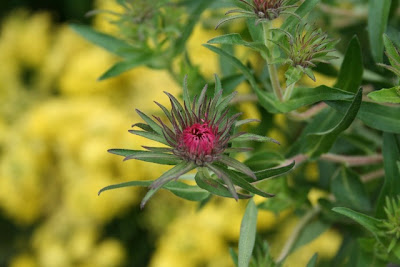 Asters don't all bloom at the same time. There are petite, earlier-flowering forms, often alpine, which gladden the gardeners heart during summer, and the distant cousins that are annual 'asters' (Callistephus). I don't grow the annuals, but do have a wide variety of perennial asters, some of which are just as delightful while in bud as in full bloom. 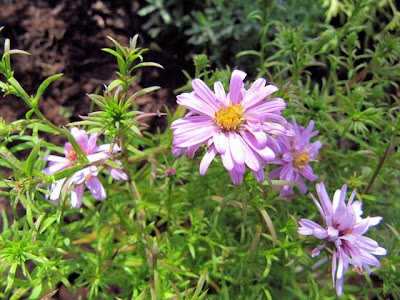 'Woods Pink' is a dumosus aster, one of the lower-growing, even ground-covering, forms. It's wellnamed, being a powderpuff-pink shade, and a nice addition to borders.
A word about genus nomenclature. In recent years, DNA typing and further study has led taxonomists to move some former members of genus aster to other genera, including Symphytotrichum, Eurybia and Eucephalus. It's always so encouraging to gardeners to have an easy-to-pronounce name switched to something more cumbersome, isn't it? (Or not...) However, for simplicity's sake I am going to refer to all of these as asters, and you'll find plenty of websites and books that do the same, offering the newer name as synonym. No one will scold you, unless it's some taxonomist with nothing better to do. 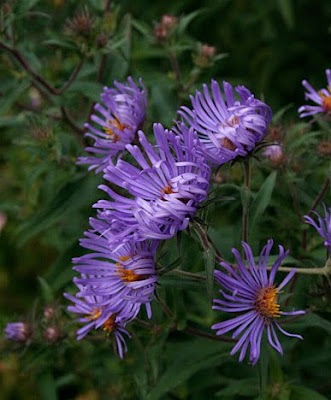 I used to have a perennial problem with asters, in that I would buy a couple and plant them out, then forget where they were, and inadvertently weed them out in the spring. I would also invariably leave several wild asters, of which there are at least a dozen species in Nova Scotia, (plus the infinite interspecies hybrids that form from these promiscuous plants), to come into bloom instead. Now, I simply leave them all to grow, and whether they are cultivated types like this tall, NOID New England aster... 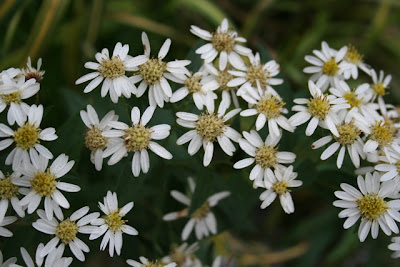 ...or wild varieties like this white wood aster (which now is classified in the genus Eurybia rather than Aster, but it's close enough), they are all welcome to put on a show in my borders. Asters are great pollinator plants, often covered in bees, bee-mimics, and butterflies during warm latesummer and autumn days. 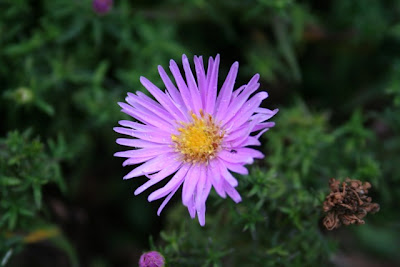 One of the newly added, lower-growing named asters in my garden is 'Anneke', a dumosus variety. You can make these as well as the taller varieties bushier and even more floriferous, though a bit later-flowering, by cutting them back in June or early July to about half their height. They will then be less prone to blowing over in the rains and gales of September, and produce even more stems of brilliant blossoms. 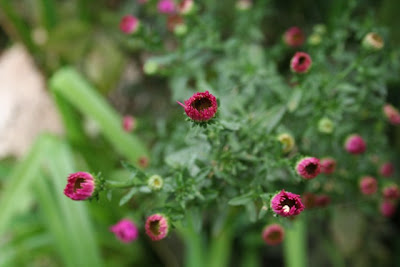 One of my favourites is 'Jenny', which is planted under a 'Snow Pavement' rose, and the hot pink of the aster is cooled and charmed by the pale lavender of the rose. Again, the buds just opening are as delightful (in my mind) as are the fully-flushed blossoms that will be here in a couple of days. 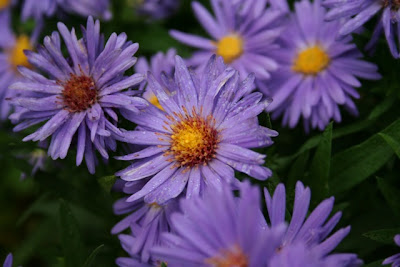 In my front border, a Michaelmas or New York aster named 'Dragon' (A. nova-belgii 'Dragon') is producing a vivid display of bright purple-blue flowers. It's new this year, and I've marked it because I want to move it a little more mid-border; this year it's only about a foot tall, but I've found in subsequent years the Michaelmas daisies can get fairly tall, especially if I happen to forget to prune them in late spring or early summer. 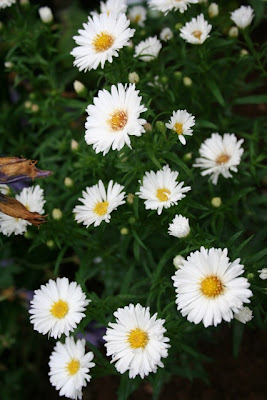 A. nova-belgii 'Puff' is another of my favourites with its pure white flowers that resemble miniature shasta daisies. I first located this plant at the garden centre at Kingsbrae Garden in St. Andrews, New Brunswick, where it charmed me on sight. It has continued to be a delightful addition to my garden for several years, although 'Winston Churchill', a deep pink-wine variety I bought at the same time, shuffled off its mortal coil (or was possibly victim of my pre-laissez-faire aster weeding of years gone by). 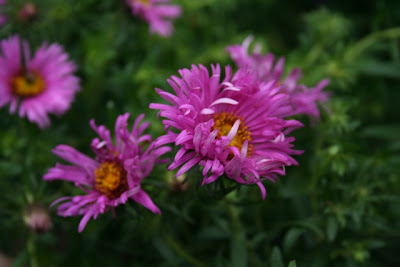 My absolute favourite New England Aster, 'Alma Potschke' is not yet in bloom because of where it's planted in less than full sun (and I keep forgetting to move it until it's too large), so we wrap up this little ode to asters with an almost-as-brilliant variety, the delightful 'September Ruby'. I forgot to prune this one this past June, and it gets somewhat rumpled by catching the west wind in my back garden, but its hot-magenta flowers create a blaze of colour that never fails to cause a smile on my face.