No makin fun of my ass: Jenny & Leggo 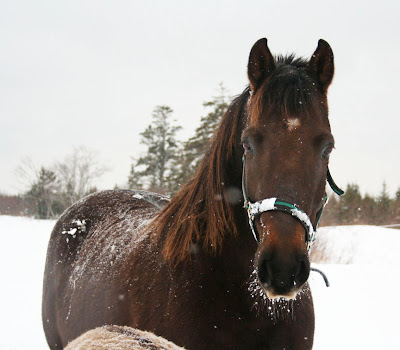 People often ask me why I don't have trouble with deer in the garden. Or, for that matter, with coyotes. We live in a very rural location, with open fields and woodlands all around us, and there are plenty of both deer and coyotes around. But we have our own built-in critter repellent in the form of our attack donkey, JennyManyAnyLumps, and her horse, Leggo-My-Eggo. 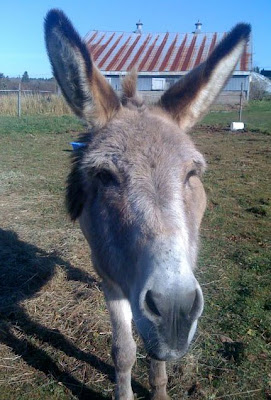 Jenny, it has to be said, is neither smart nor beautiful. In fact, she may possibly have donkey-Alzheimers, as she often forgets where the heck she's going, even from barn to paddock--a distance of maybe fifty feet. In her defence, she's somewhere around 30 years old; she was about twenty when we got her a decade ago to keep my then very young horse company. Leggo is a purebred Morgan, and horses being sociable herd animals, he didn't appreciate being an only child when we brought him from the large stable where he'd been boarded by previous owner. So we looked around, and our farrier told us about a donkey who needed a good home, and we brought Jenny home to be Leggo's buddy. 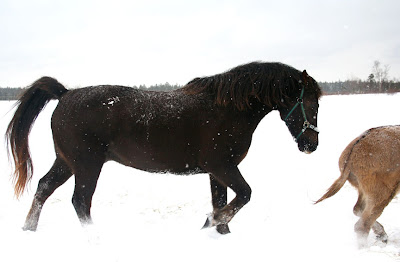 It was love at first sight. They are devoted to each other, and neither of it likes it when I take Leggo away for a ride. Jenny stands in the barn or paddock and makes desperate sounds resembling a bellows crossed with a foghorn. However, when they're together, Leggo tends to bug her, playing 'herd the donkey' on a daily basis.
Despite her age, somewhat-stunnedness, and exasperation temperament (she moves on Donkey Standard Time, which means when she feels like it, quite annoying if you're trying to get her somewhere in a hurry) Jenny is awesome at coyote and deer detection and repelling. I don't know if she thinks deer are just longlegged coyotes, but she snorts and honks and stamps at them, and she would kick the stuffing out of any coyote foolish enough to try her on. She unfortunately doesn't discriminate between coyotes and golden retrievers, Weimerauners, and even cats, so visiting relatives and friends know not to bring their dogs beyond the fence. Leggo doesn't mind, but in Jenny's mind, they're all coyotes. Our two senior cats who do go out give her a wide berth, and in the barn, she's no problem at all with them. 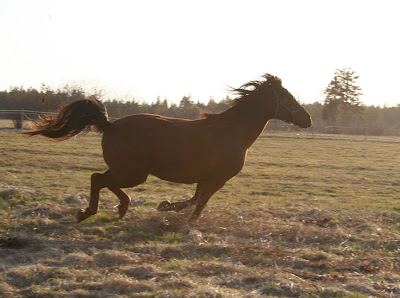 ...when that gets boring, he just goes into flight around the pasture. Watching him gallop, buck, and have a blast gives me great delight. 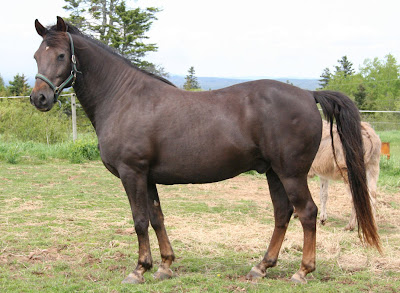 Leggo likes to play with me too; we play a complex game of tag called 'Fierce Wild Horse' in which I chase him around the pasture, he gallops and bucks and snorts like a dragon, and then comes bouncing back to me if I don't get to where he's paused quickly enough to suit him. He LOVES this game, and gives me the eye hopefully whenever I come out to the pasture to visit. 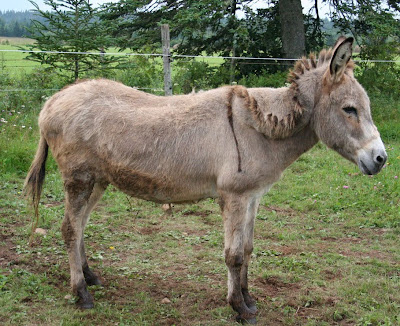 Jenny looks like she was created by Salvadore Dali, with her funny neck. When we got her, she was living with a bunch of cattle, which were fed grain daily. Jenny liked to clean up the feed after them, and donkeys very curiously don't gain weight all over, but in pads and certain spots, including their toplines or crests of their necks. When the crest gets too heavy, it simply falls over. It's solid, and it doesn't hurt her, and even though she's quite svelte compared to how she was when we got her, it will never go back to its original shape. However, most of us can sympathize with her.

It doesn't affect her agility; she rolls daily, several times usually, and she gallumphs around the field when the spirit moves her to. The past few days, there's too much ice in the field under just a bit of snow, so Jenny and Leggo are both in the barn for their own safety. 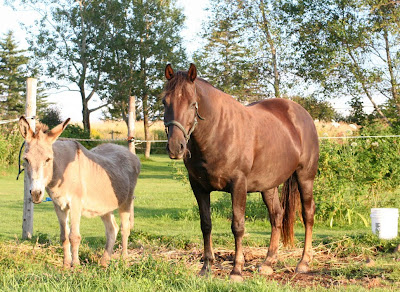 Like me, however, they tolerate winter because they know that eventually, spring and summer will come, and they'll have plenty of days to bask in the sun and nibble pasture. They have a good life. Leggo is mostly a pasture potato these days with my knees like they are, but he enjoys a regular game of fierce wild horse, and he's well loved, so it's all good.

Email ThisBlogThis!Share to TwitterShare to FacebookShare to Pinterest
Labels: horses, Jenny and Leggo