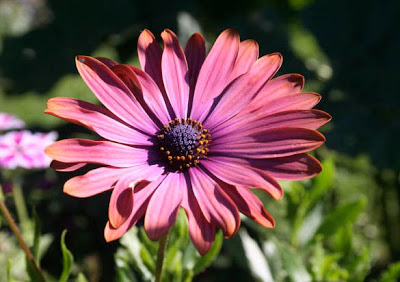 The good news here is that the temperature has climbed out of the frigid depths to something a little more temperate and Nova-Scotia-winterlike.
The maybe not so good news is that it's snowing again.
I'm unphased by any of this, still remaining sequestered in the house for the most part, although I'm decidedly feeling better and more like my old self. So while we observe the flurries where winds blow onshore, which should shortly become significant heaps of 'flurries', it's time to look back a bit more on last year and the plants that performed well for me.

This is by no means an exhaustive list, and not all these plants are the newest on the block. Some are several years old, or have been planted here for several years and are truly coming into their own. All but one in this post are perennials or shrubs; the one exception is the above osteospermum, 'Summertime Blueberry.' I hope to find it again next year, because I loved the interplay of copper, blue and purple colours blending together. It flowered well, like all the osteos, with occasional deadheading and feeding, and of course like the other African-type daisies we grow here, flowered until a hard hard killing frost (and some snow) finally took it to its compost heap reward. 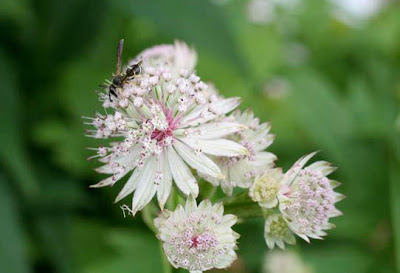 Meet Astrantia 'Sunningdale Varigated' masterwort--I know you can't see the foliage, which is gaily splashed in gold and green, but this second-year plant makes my heart very very happy. I became smitten with masterworts a couple of years ago, and while they aren't my signature plant, I'm gradually adding to the varieties we grow here at Sunflower Hill, and recommend them to others with sunny or partly shaded conditions. This variegated foliage type seems to like partial shade quite well, and of course variegated foliage brightens a shaded spot nicely. 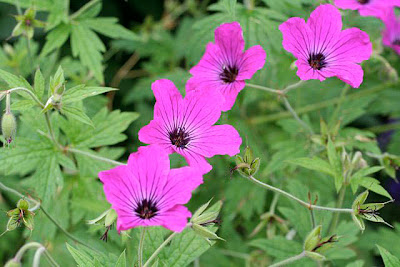 Another second year perennial, Geranium 'Red Admiral' is quite impressive. Its colour may not be to everyone's liking, but I love the sanguineum type cranesbills for their brilliant flower colour. And this one grows large; it was between 3-4 feet where I had it planted, and tangled itself nicely in among Clematis recta 'Purpurea'. I deadheaded it when I thought about it (on days that weren't foggy) and it flowered for a long, long time. I love cranesbills for their hardiness, non-fussiness and variety; we have somewhere around a dozen different species and cultivars, and they just do splendidly here. I must list them all out one of these days when there's nothing urgent going on. 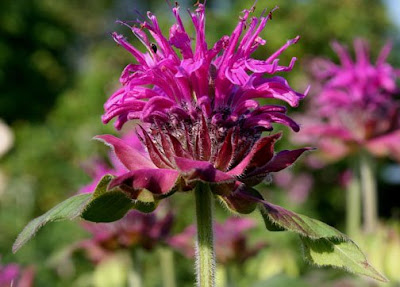 I never met a monarda I didn't love, and I especially love 'Raspberry Wine.' However, a caveat to those with small gardens: this is probably the most vigourous monarda I've encountered and if you have it in a small space, it will rapidly crowd other plants. It's also quite the overachiever, growing more than 5 feet tall in one garden, but in most spaces I cut it back early in the summer and it bushed out more, produced huge numbers of flowers, and of course made the hummingbirds and bees and other pollinators very, very happy. 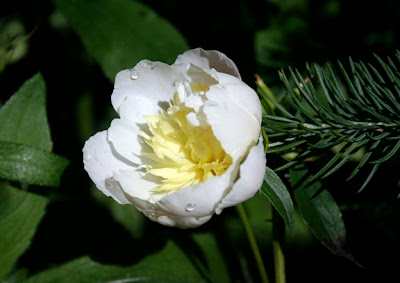 Peonies are a mixed blessing to some, because they flower for a couple of weeks and then just sit there, big heaps of foliage. In our garden thatny's not a problem; I love the glossy, handsome foliage, especially of those varieties that turn gorgeous colours in autumn, and we have so many other plants blooming here that the peonies being done doesn't cause a problem. Although I don't have a yellow flowered peony--I'm unconvinced that tree peonies will tolerate our conditions, and flatly refuse to pay 100 bucks or more for a species like P. mlokoseveitchii--this is pretty close; Peony 'Primavera', purchased several years ago at Briar Patch, one of my favourite nurseries, and coming into its own quite nicely. 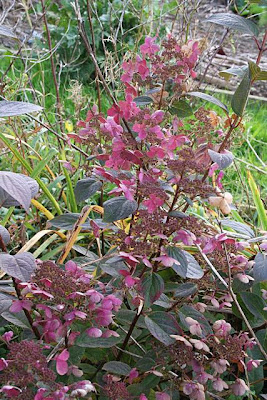 Two summers ago, I received a shipment of plants to trial via Proven Winners, including Hydrangea 'Quick Fire.' I love love LOVE this hydrangea! It's the first PG type to flower in my garden, a good six weeks or more before 'LimeLight', and even before the lacecaps and Annabelle types. Its flowers turn dark very quickly, its foliage is handsome in fall.... 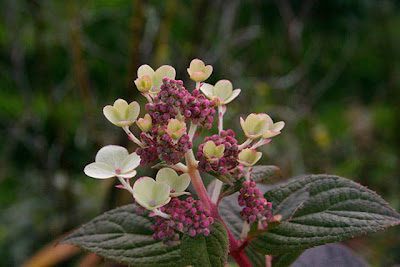 And it even put up a second flush of blooms last year in late summer/early fall. A couple of shoots did this, not the entire plant, and I'm not sure if this is normal, but it was fun to watch. It seems to be as tough as nails, and I'm going to be recommending it wholeheartedly to others with a fondness for paniculata grandiflora-type hydrangeas. 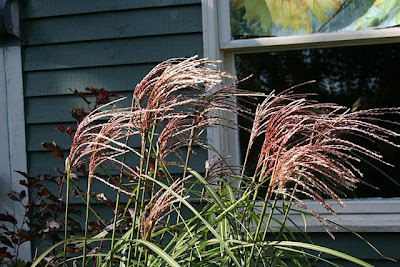 My love affair with perennial grasses continues. Several years ago, my friend Rob Baldwin handed me a pot of Miscanthus 'Huron Sunrise'. "Take this home and try it," he said. Who am I to argue? It has done brilliantly; and it looks particularly beautiful near 'Coppertina' ninebark and my echinacea collection. It doesn't appear to have the wandering tendencies of some Miscanthus cultivars, and it was bred in Canada by grass enthusiast Martin Quinn, who lives on the shores of Lake Huron in Ontario. I may divide it this spring; I never divide grasses in late summer or autumn because they need time to establish their root masses. 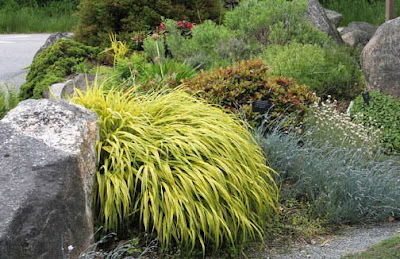 Another grass I am very, very fond of is Hakonechloa, or Japanese Forest Grass. This is H. macra 'Aureola' which also happens to be perennial of the year according to the Perennial Plant Association. It's a great choice; it's a slow growing, cascading beauty, good in sun or partial shade, and works well at the front of borders, in rock gardens (this is not my garden; it MAY be the front border at Spencer's in Shelburne), and it just grows politely and minds its business. 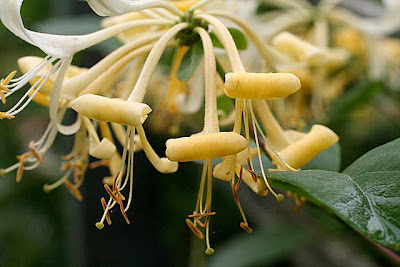 I bought this honeysuckle, 'Graham Thomas' several years ago, I think from Jill at Bunchberry Nurseries, because she had one blooming its head off and I fell in love instantly. It's been slow to get started because I planted it near The Bleeding Heart that Ate Scotts Bay, a vigourous Jackmanii clematis, and some other zealots, and they sort of daunted it for a bit. Honeysuckles of the vining variety take a few years to really come into their own; this year past both Graham Thomas and the Canadian-bred 'Mandarin' decided they'd been in the garden long enough, stopped sulking and started growing like 'Goldflame' does. I love the structure of honeysuckle flowers, and the hummingbirds adore them for other reasons. And I like my hummingbirds very happy! 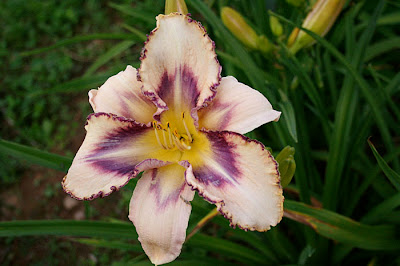 Not the newest or flashiest Hemerocallis on the block, but I wanted 'Destined to See' the first time I saw it in someone else's garden. The first plant I got was mislabeled, (and I still don't know what it is!) so I muttered and sputtered and hunted until I found one in bloom at another nursery, and brought it home, muttering dire invocations against idiot customers who switch tags on plant pots or careless staff at propagating nurseries. Garden karma will get them! 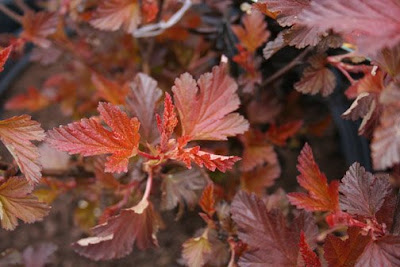 I know that others have reported problems with mildew (either powdery or downy, I'm not sure which) on their 'Coppertina' ninebark. I've had absolutely NO problem, even when there's been powdery mildew on a few phlox, monarda and pulmonaria plants. I adore all ninebarks (and there's a new one I am slobbering over, but that will be another post); their foliage is great, their flowers lovely, their fruit very cool and their bark in winter just awesome to look at. Ninebarks are good for attracting and feeding birds, too, although I'm not sure whether this one will produce fruit; it's flowered for me but I haven't seen fruit the way I do on 'Diabolo'. Mostly it's just the foliage that infatuated me when I first saw this shrub in Ottawa, back in 2006, and I was very excited to get it in 2007. 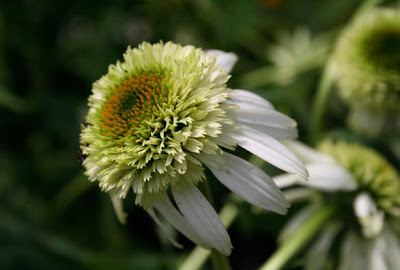 It's no secret that I am as besotted with echinaceas as I am with poppies. We have the standard E. purpurea around here in good large clumps, but I've been adding the new coloured ones for several years too. In 2007, it was 'Green Envy' that I had to have; it continues to do spectacularly well, better than the Itsaul 'Big Sky' series of orange and yellow varieties. Last summer, I was excited to get my hands on 'Coconut Lime', a unique and fun double-centered cultivar from Terra Nova out in Oregon. It settled in like it had been growing in the garden for years, flowered its head off almost as profusely as 'Green Envy' did, and looked awesome near 'Coppertina' ninebark, 'Huron Sunrise' Miscanthus, and the rest of the echinacea collection. I hope it will overwinter as sturdily as Green Envy, as nothing got mulched here before the snows came, so it's a toughlove winter for everything. 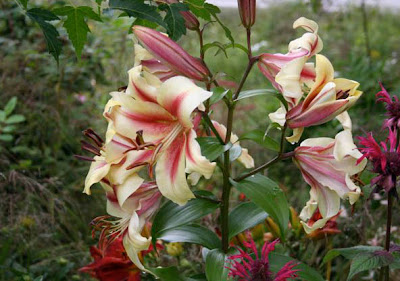 I love scented plants, so it's no surprise that I have lots of oriental lilies around the garden. This, however, is an Orienpet, a cross between trumpet and oriental lilies. It's called 'Caravan', and I adore it with the adoration of a thousand blazing suns. It grew brilliantly last year, its second season, the fragrance is gorgeous and powerful without being cloying, and its flowers shone even in the fog. I plan to add many more orienpets and orientals and trumpets this year, so as to add even more fragrance to the garden.
So that's a look at some of the 'best of' plants from last summer. As I observed in an earlier post, I didn't find as many new plants at some nurseries as I had expected to find, and of course I didn't buy everything I saw last year that I DID want. Had to save some for this year, and I know one nursery-owning friend is bringing in a tree that I gotta gotta have. But we'll save that for another post.