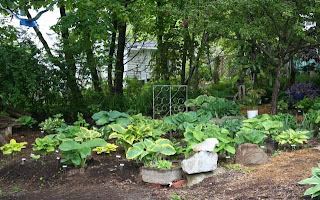 Just back from a flying trip to Rothesay, New Brunswick, where I had the great pleasure of meeting with the Fundy Gardeners, a great group of gardening enthusiasts. Thanks to Steve Nason, the president, for the invite, to Lynn and Peter Kinsella for hosting me at their wonderful house, and to the highways of New Brunswick for being so great to travel on. 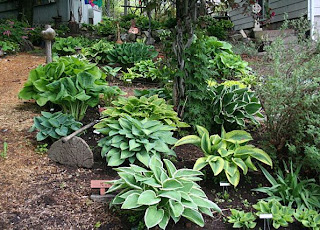 Lynn had told me that her husband was not only a great gardener, but he was passionate about hostas, and that as a result, they have a LOT of hostas. Well...she wasn't exaggerating. In fact, I would say a LOT is an understatement. Something between 4-5 hundred--different cultivars, not five hundred plants of the same variety. Everything from the miniatures that could grow in a tea-cup to the massive plants like Sum and Substance, in every size and colour combination between. It was blissful to see all these marvelous plants, each one labeled, each one growing at its own size and speed, each one distinct and cherished. 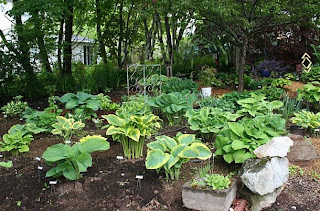 I've been in gardens with a few dozen, or even a hundred or so different varieties. I'd never seen anything like this, however. Peter adds mushroom compost to the soil, which hostas (and other plants) just love. He also sprays a solution of ammonia to combat slugs, and finds this very effective. He's had problems with deer in his tulips, but so far, not in his hostas--whether they don't like the ammonia, or dislike Plantskydd, they're dining elsewhere rather than on a hosta buffet. 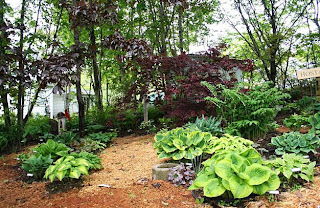 The Kinsellas don't just have hostas--they have a host of flowering trees and shrubs, perennials, container plantings, and lots and LOTS of garden whimsies, and it all works really well. I especially like the juxtaposition of neatly-growing hostas, with their methodical and regular patterns, with unique and fun garden art pieces. 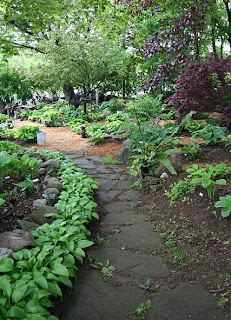 Though it was a fun trip, it was also hectic, and I was limited in my Internet access, so once again, I'm behind with visits and comments and replies, oh my. And let's not even discuss the state of my garden, also known as the jungle. But it's a happy jungle. Doesn't have quite so many hostas as this one, but I'm inspired to collect a few more now. Just a few.