"...And the Rain Came Down" Garden Bloggers Muse Day. 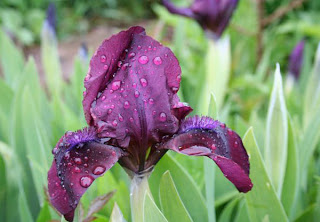 It can never be said that I don't have rather eclectic tastes in music. From Alison Krauss to Albinoni, from Cowboy Junkies to Chopin, from the Tragically Hip to U2 to anything by Bach but especially the Goldberg variations, the only music I adamantly despise is urban/hiphop/rap. It's just not me. And I'm not crazy about bluegrass or real hurtme-twangy country music, but I do LOVE Steve Earle. And so it wasn't really a surprise that I sat up when his song "The Rain Came Down" popped into my head (rudely overriding a blissful moment I was having with Our Lady Peace) because REALLY...we're having monsoons here tonight. It's the weekend, after all. This seemed like the right snippet of lyrics to use as my entry for this Garden Bloggers Muse Day, brought to us by Carolyn of Sweet Home and Garden Chicago: 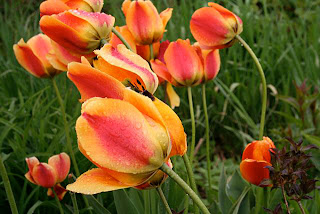 And the next song to go along with this should be Bob Dylan's Blowin' in the Wind. Because we've had nuttin' but wind all week long. After a few days of it, I get really cranky, because it's a cool wind off the water and I don't wanna do anything outside as a result. 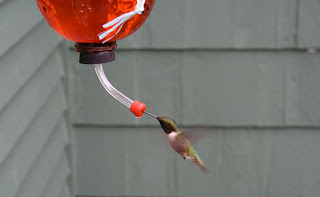 The weather hasn't deterred the hummers, who are incredibly brazen--and voracious. They come look in the windows at me when their feeders need filling--and that is twice daily right now. I guess they think I'm safe, as this one was hovering waiting for me to finish filling before he dived right in. 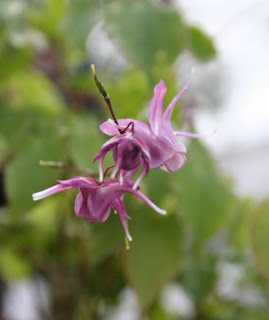 This morning saw me on the road to Truro, where it wasn't raining, to give a talk on container plantings. First stop, however, was the Farmers Market, where I had a chance to chat with Jane Blackburn of Woodlands and Meadows Perennial Nursery. Jane carries a host of native plants as well as some wonderfully unique perennials, and today I was tempted by some new to me succulents. And a dandy epimedium. And the cutest little primrose. 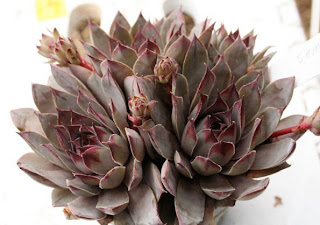 This Sempervivum is called 'Viking.' 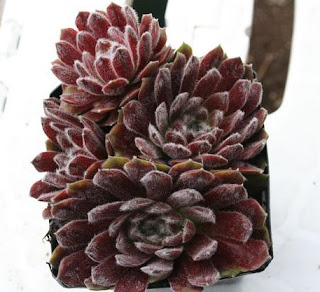 And this is the well-named 'Icicle'.Speaking of which...while we didn't have a frost the past couple of nights, we came close. And tonight--I have the woodstove blasting to take the chill and damp off. It's enough to make one scream. 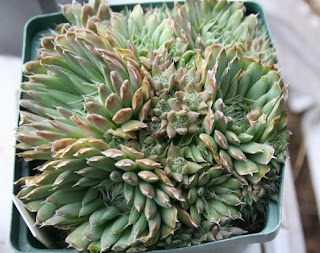 And this intriguing little number is Orostachys spinosa. I didn't know this plant, so I went off to have a look for info about it. Here's what Kristl Walek of Gardens North Nursery has to say about it:

In a genus of largely fleshy, spreading plants, O. spinosa is the odd man out. It is often mistaken for a Sempervivum, although it is decidedly more elegant; forming a low, spiny, grey, globose rosette which can be 10cm across at maturity. This normally takes a minimum of 5 years and at its peak, the plant is a wonder to behold and a perfect study in symmetry. The rosettes are evergreen and emerge from winter shrunken and tight, shimmering like grey-green metal. The rosette expands and opens as the season progresses and changes to soft grey-green.

After I was done at the market and giving my talk, it was time to beat it back to the Valley for another project that I was committed to. But there was time to stop into a couple of garden centres in Truro....where I was singularly unimpressed by the quality and selection of plants. Two of the garden centres were not surprisingly dull, but the third one, a satellite nursery of a large garden centre in another county, REALLY surprised me because it had next to nothing of interest, and what it did have, at least in the annual selections, was way, way overpriced. Maybe they're stressed by heating bills, but if no one is buying, then they might need to adjust their prices somewhat. 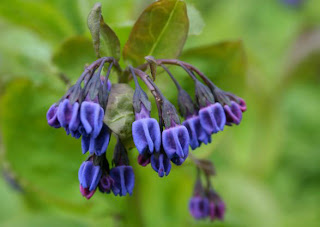 However, as always I was thrilled by what Jane had, and likewise what Lloyd Mapplebeck of Hillendale Perennials had on offer. Lloyd doesn't have a website, but he's an excellent plantperson and I always buy all kinds of treasures from him every year. He did say he's seeing a lot of customers from the Halifax area, because quite frankly, Halifax has very little in terms of decent plant centres either. What's there is mostly the same ol' same ol' that has been carried by the same centres for the past number of years. I never make a trip to the city to go through garden centres--but lots of people head OUT Of the city for Truro, for the Valley, for the South shore. It's an interesting conundrum. 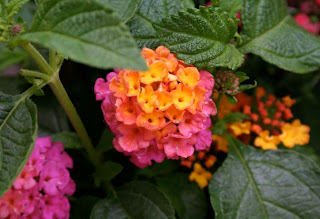 I did scoop up some more lantanas, as I am totally besotted by their colours. I love this one's name: Landmark Sunrise Rose. There's another one right beside it, but its label went among the missing. In my greenhouse. I think the garden gnomes carried it off. 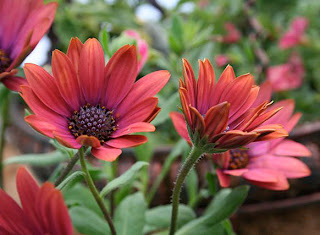 The one astonishing find I scored at the Co-op garden centre in Truro was this new-to-me osteospermum. I love love love osteos, and the past couple of years the breeders have trotted out some glorious new colours. This beauty is called 'Summertime Blueberry' and I bought four plants because the brilliantly rich porange (pinkpurple orange) just thrilled me. some of the flowers have more distinctive divisions in the colour, but I'll plant them out and then take more photos--when the rain finally stops and the sun comes back out....

Happy June Muse Day, Friends. I'm coming to visit, except for one: Where the Heck is Flowergardengirl gone to? She left a comment here but I can't raise her blog? Anyone know what's up?