Contrary to the suspicions of those of us who don't lean towards the current provincial government, spring in my fair province hasn't been cut due to budgetary restraints. It's just taking its own sweet time to reach us. Maybe it decided to linger longer in the gardens of some of my blogging friends and comrades, painting their gardens in swaths of freshest green, spangling flowers here and there in lovely flourishes. I know that spring, like a shy maiden, has been playing coy with Layanee, who also is longing for the season to really begin; with Dirty Knees, who claims to be jealous because some of our southerly neighbours are bragging of daffodils while DK can only post photos of last year's flowers due to snow still covering the garden; John at WiseAcre Gardens is experiencing similar snowy gardens, since winter doesn't seem to realize that its best before date has long passed, and so should it. 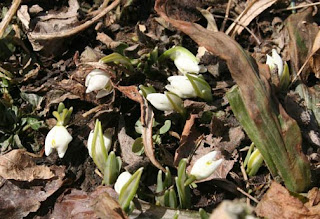 I sympathize, truly I do. But there is hope that spring is trying to put in an appearance here. Look what I found a couple of days ago (Easter Monday, to be exact); these brave little double Galanthus are scarcely an inch tall but already opening their bundles of delightful joy to the sun. When the sun manages to bludgeon its way through the clouds, that is.

In looking back through previous years, the snowdrops' emergence is right on schedule--that is, in spots where there's no snow. A stroll around our place shows the yard and garden at its very worst, with perennial stalks needing to be cut down and removed to the compost heap, great patches of snow still lingering a foot or more deep in some spots, and the grassy parts of the yard as frost-heaved and hillocky as to resemble a miniature version of Gros Morne. The pond is still full of ice, so no frogs are tuning up their banjos just yet, but the redwing males are calling for females to come-and-greet, come-and-greet, from their sentinel positions on cattail stalks. Yesterday I watched skeins of Canada geese winging their way in from the north and landing in the fields and dykelands around the Habitant river in Canning. To some they may be a nuisance, but they're one of my definite signs of spring's return. In the autumn, their cries sound mournful--in spring, they sound jubilant, even while landing in a snow squall! 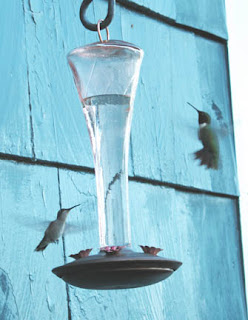 We're still weeks from the arrival of the hummingbirds, but in about three weeks time I'll start putting out the feeders in case any early arrivals get blown in by the gentle spring zephyrs that blast in off the mighty Fundy, bless its gorgeous but cold heart. That's part of the reason for our cold springs, being as we have these huge bodies of water almost completely circling our province. Were it not for the isthmus of Chignecto that connects us to New Brunswick, we'd be another island province.

One of the beauties of keeping a blog over several years is that I can quickly find out what was happening at this time in previous years. We have had more snow this winter than last, and I don't think that's a bad thing--except I worry for those areas of Canada and the US that got way more than usual and are subject to flooding. Here's hoping that the snow leaves gradually--I know that you're all impatient for spring, as am I, but we'd like it to gently unfurl, not wash everything away in a torrent of meltwater and rain.

Hope does spring eternal, just like the seasons, in the gardener's heart. Little things like the less-tarnishe plumage of the goldfinches, the profuse shedding of my hairy mudball horse, the swelling of twig buds and the brightening of willow bark, all remind me that the seasons will change, even if slowly. And last night, leaving yoga class in Kingsport, I caught a scent on the air that I hadn't smelled in many months. You all know that scent--the indescribably sweet, (to gardeners) rich, inviting fragrance of the land warming up.

It's coming, friends. Just three months ago, we were recuperating from the indulgences of Christmas. In another three months, we'll be grumbling about too many weeds, hot sunny days, an excess of garden to-dos...but we'll be grinning while we do this, won't we? And long before that, we'll feel the reality of spring energy all around us.

Hang in there, fellow gardeners. We'll make it. 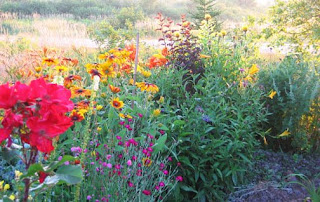