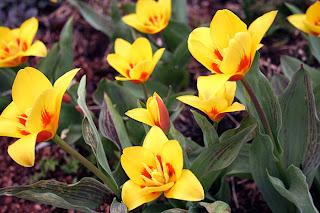 Four days of really warm, summery weather, and the gardens have exploded in earnest. On the Valley floor, Amelanchier has started flowering, with its lovely white blooms and coppery new foliage. We’re behind here, but the tulips have popped open in the last day or two, surrounded by seas of daffodils. These tulips are a species, I don’t remember which one without looking up. Aren’t they happy?

It’s always dangerous to go to garden centres at this time of year…plants beckon seductively to us, suggesting that we can’t possibly live without them in our gardens, and what are we to do with such tempting comments?

To be fair, it started out innocently, as these things always do, as a totally altruistic trip to Baldwin Nurseries to take some of last year’s big black pots down to Rob for his recycling pleasures. I also had planned to drop in and see my friend Catherine and then to finish out my jaunt with hubby’s truck by getting some bags of mushroom compost from the organic mushroom plant.

Well. Coming down the Mines Road towards Rob’s nursery, I met a tractor trailer coming UP the hill. Hmmmm. Whatever would a tractor trailer be doing out here? Especially one with a big shiny trailer, rather than a log loading boom and log trailer. Sure enough, when I pulled into the nursery, I saw them, lined up like leafy and flowery soldiers. A shipment of new stock. Shrubs—pieris, rhodos, japonica, flowering almond, some chamaecyparis…and oh my goodness, isn’t that a Betty magnolia? A whole slew of them? 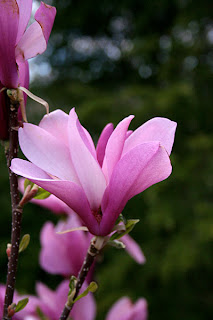 Yup.... Magnolia stellata Betty. It was love at first sight. And the price was excellent—Rob’s prices always are fair, and his quality awesome (I can say this because I don’t expect him to have time to read anything until about November, so he won’t get a swelled head…) so it was a case of “I need this and I’m having it and I don’t care if it’s in the inventory yet and can I lay it down in the back of the truck?”

Of course I brought one home. And have planted it already too. I haven’t yet planted the Acer japonicum seedlings he gave me to cold test, nor the Stained Glass hosta I also HAD to have…but Anne is in pride of place in the front garden, where she’ll get some protection from some of our winds. I resisted the flowering almond; AND the Cornus kousa AND the purple beech (til next time, when it and an Acer rubrum and a Quercus rubra (red maple and red oak, respectively) and a Japanese tamarack and whatever else catches my eye get in the truck bed.

After that it was off to see Catherine, where we lamented the appetites of deer-vermin, celebrated the efficacy of cider vinegar as a herbicide (with salt and detergent), conspired about plantings for the year…and Catherine had an extra Dorothy Perkins that was in the wrong spot and did I want to take it home with me?

Well, sure—Dorothy is a favourite in Nova Scotian rural gardens, and I didn’t have one. I had a rose that was supposedly Super Dorothy, but it had been on a rootstock, and after three years, I realized I was getting rootstock, some wild and not that interesting canes that never flowered, and out it went. Catherine and I both agree that buying bud-and-graft roses is essentially a waste of time in Nova Scotia’s climates, and roses grown on their own roots rule.

Gardeners have a love of sharing plants with other people. I have given away lots of extra perennial pieces for a plant sale coming up, and have started potting up some things to take to friends around the province next week. Including—don’t laugh—nettles. Yes, nettles. I’m very partial to them because they’re a larval food plant for the red emporer butterfly, and for other creatures too. Plus in the compost heap they’re highly nutritious. Another gardener who shares my enthusiams for nettles wrote to ask if I knew where in the city she might find some…so of course I volunteered to bring some in. Only those of us who really do appreciate native plants in all their myriad variety—well, okay most of their myriad variety—don’t get me started on buttercups or ground ivy!—understand the importance of having plants that others would call ‘weeds’ in our gardens.

Granted, Anne isn’t a native plant. I’m not a purist, because I’m too fickle hearted—I love plants of all kinds. I rationalize, however, as addicts do—sure Anne is native—somewhere, just not here!

That’s my story and I’m stickin’ to it.