Of Mayflowers and Catnames: Letters Across the Pond 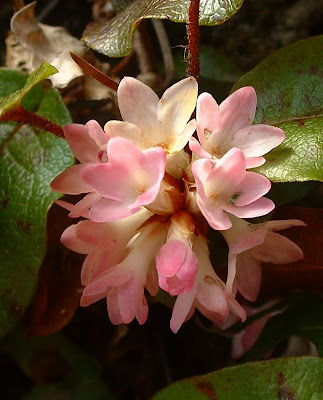 Dear Sylvia:
Doesn't everyone write blog updates and letters at 4 in the morning? Probably not. But when I wake up from a sound sleep in a hotel room, sans cats and LSS, I know there's absolutely no point in going back to sleep any time soon. So since I'm behind in my correspondence with you, as well as with my blog posts, this seemed like a good time to catch my breath and catch you up with life in Nova Scotia.
This weekend finds me, as I observed in my last post, in Halifax at the 5th annual Saltscapes Expo. This is a unique show for the province, put on by Saltscapes magazine, where I've been a writer for a number of years. Saltscapes is all about Atlantic Canada, and I've been privileged to write about a lot of topics over the years, including, of course, gardening. I'll post photos from the show at some point during the weekend.
We're experiencing a true spring weekend. After two days of ridiculously prolific wind and rain, the sun pushed through the clouds, quelled the wind somewhat, and put temperatures into the high teens and low 20s celsius, (high 50s and low-mid 60s, for those of us still resisting metric 3o years after the fact). I can HEAR my garden growing from here, but happily, Longsuffering spouse is doing a great job on the basic cleanup. I don't know if I can cajole him into doing any weeding, but he'll edge beds if I ask him nicely. 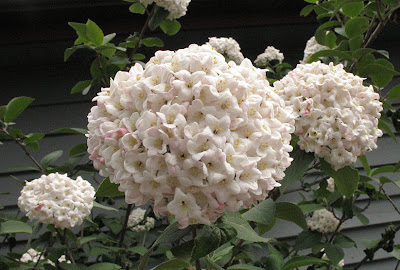 In working in the garden myself the other day, I discovered to my sorrow that several of my spring-flowering, fragrant viburnums had a lot of snow damage; broken limbs, some of them right to their main trunks. None of them are particularly large--two were put in last year--but I was very sad to see the damage. Having 5 or 6 feet of snow piled on top of you for weeks on end will do that, alas. I've pruned the breakage, took it inside, and put the twigs into a vase of warm water. Maybe they'll flower. Or not. I may move the two smaller shrubs, and you can be sure I'll protect them next year. The magnolia stellata nearby suffering a couple of small twig breaks, but nothing serious. Nor of course did the curly willow. It's all part of being a gardener, isn't it? 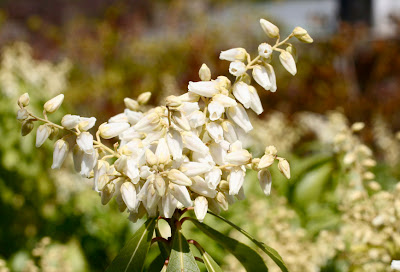 A couple of branches broke off my Pieris shrub too, and those I took inside several weeks ago and put into a vase. They've rewarded me rather nicely.

It's so nice to smell fragrant flowers again! Sure, I've had some cut flowers with lovely scents, like the tulips and lilies I've purchased to help get me through winter, but there's nothing nicer than smelling a sweet fragrance outside in the garden. One of our best spring fragrances, to my mind, is that of our provincial wildflower, the mayflower or trailing arbutus (Epigaea repens.) This ericaceous plant looks nondescript when it's out of bloom, with its leathery, hairy leaves and trailing habit. But then it flowers... 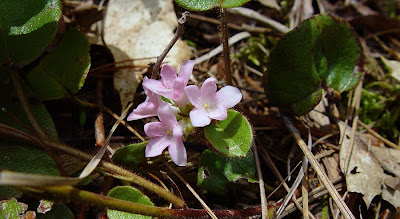 And suddenly, we know for sure that spring really has found our province. These dear plants make me absurdly happy. I can be found sitting on sun-warmed ground in places like my beloved Pine Grove, peering at the flowers, smelling them, taking their photos, and grinning a lot.

I don't pick mayflowers, and while I've been tempted to dig a cluster from the woods near our place, I haven't yet done so. I worry about them the way I do about the ladies slippers, not wanting to disturb them in their natural habitat. But I think this spring I'll wander down to the woodlot below our place, the same site we successfully rescued clumps of red trillium from, and see what I can find. I feel no guilt in rescuing plants from a ravaged woodlot that will likely never see replanting, and besides that, it's almost time to go counting trillium, a ritual of spring that LSS and I faithfully enjoy. 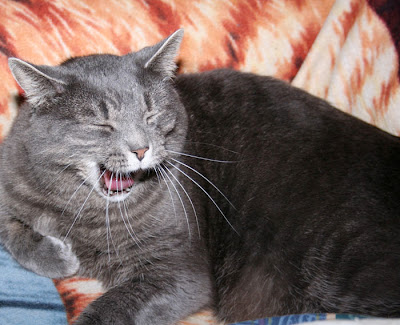 A footnote to today's post is actually directed mostly to your compatriat, James Alexander-Sinclair of Blackpitts. He wondered in his comment on my last post about Spunky Boomerang being saddled with such a name. Despite his questioning of my sanity, I can assure James and other cherished readers that Spunky chose his name himself. He was a wee kitten when we rescued him and his sister from the side of the road where someone had abandoned them, and barely escaped death when he darted across the road in front of a passing vehicle. He got blown into the ditch, and emerged wailing and complaining, went up into my arms and began to purr. And has never expressed a desire to go out-of-doors since.
We had him and his sister for a few days before he told us his name. They do that, you know. His sister became MangoTango almost immediately, but he was coy for a few days. Then one night I heard LSS talking to someone. I went into his office and he had this little kitten sitting in his hand looking at him. "You're quite the spunky little fellow, aren't you?" he said to the kitten. He put the little fellow down, and he promptly got back up on the desk again. And again. And again. He still does this: climbs up on my desk, and if I put him down, he looks indignant and gets back up. Over and over. He returns...like a boomerang.
And that's how he told us his name. 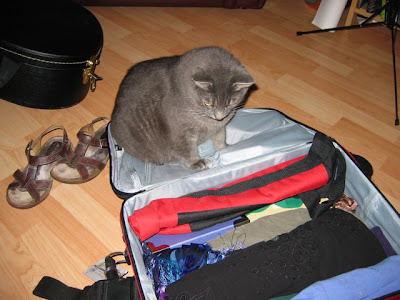 That's MY story, anyway. Spunky doesn't mind. He just doesn't like it when I go away.
Time to wrap this up and get a few more hours of snoozing before I hit the ground running for another busy day of talking gardening with other plant-people. More soonly, and I hope your wonderful garden is savouring every moment of spring.
cheers, jodi