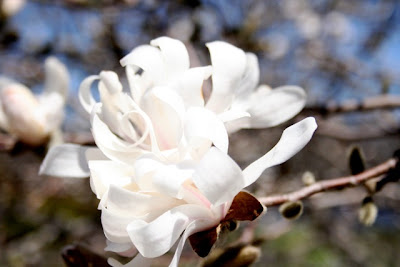 The unseasonably warm weather of the past few days has really brought some plants along, especially down on the south shore of the province. In Liverpool and surrounding area, the magnolias have burst into fabulous (and sometimes, fragrant) bloom. Meanwhile, back at home, mine are still snuggled in their sweaters, not ready to blossom just yet. 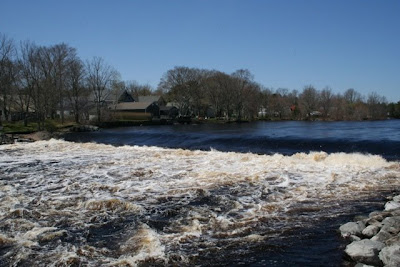 I took a drive at lunchtime today, and went out past Pine Grove into Milton. This is a small community adjoining Liverpool, and it's hard to tell when the town ends and the smaller village begins. But this is a definite sign of Milton: the falls in the Mersey River at the one-lane bridge spanning the river. No, they're not Niagara; more like a bit of rapids, and I don't know what the riverbed is like or if this is the result of something having been built there (there have been sawmills and other activity around the falls for years). 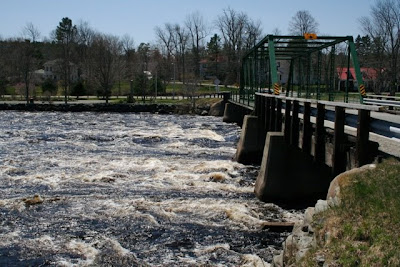 On the other side of the bridge, the water streams out into the widening river. On the other shore, there's a little park. Let's go see what it's all about, shall we? 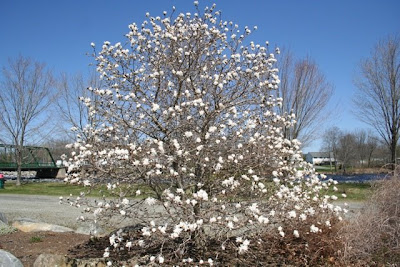 There are a LOT of magnolias around this area, as I mentioned earlier, and they're rapidly coming into full bloom. The flowers on this particular stellata variety are sweetly fragrant, but it's a subtle fragrance. Very nice. 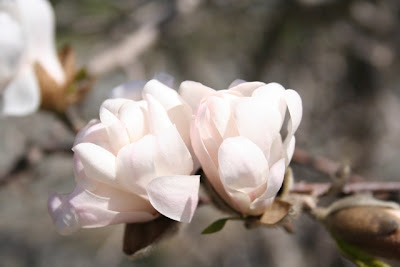 They're subtle in colour too; white with a hint of pink tint. I love magnolias, and can grow Stellatas just fine, although as mentioned above, mine in the Bay are still snoozing and swelling in their buds. 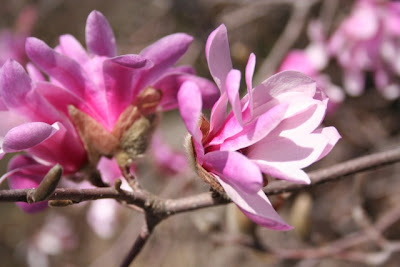 I don't know which variety this is: magnolias are not my strong suit, but they're something I do love and am learning more about. I'll be learning even more about them next week, as Annapolis Royal kicks off with its Magnolia Festival. Annapolis, another of my favourite places in my province, is home to the Annapolis Royal Historic Gardens and Bunchberry Nurseries, and I'll be giving a talk at Bunchberry at 2 pm on May 9. But not about magnolias. I leave that to my cherished friend Dick Steele, the night before at the Gardens. 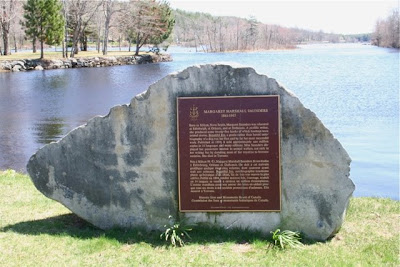 I leave you now with a bit of "I didn't know that!" information. Most of us wept our way through reading two classics of literature in our youth: Black Beauty, by Anna Sewell, and Beautiful Joe by Margaret Marshall Saunders. Being more of a horse and cat person than a dog person, and more of a modern/contemporary CanLit fan than a Victorian writing enthusiast, I had read the latter years ago and had avoided re-reading it while doing my degrees at Acadia. And I had completely, utterly forgotten that Marshall Saunders had been born in Nova Scotia: in Milton, to be exact. Beautiful Joe was the first Canadian novel to sell more than a million copies, and it's on curriculae at many universities. Marshall Saunders disguised herself as a man and used her middle name as her first name in order to gain acceptance as a writer, (women writers not being that common or acceptable in the Victorian era). I like that she is remembered and honoured with this park by the river, in a lovely part of my province, watched over by magnolias and the ever-talking river.