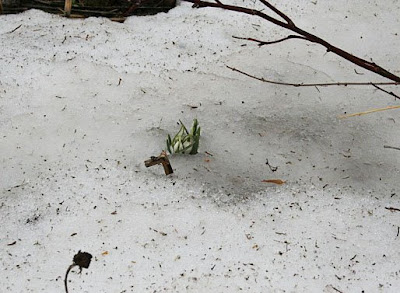 Never underestimate the determination of a spring-flowering bulb to get itself back on schedule. Yesterday afternoon, I walked around the yard (where I could get through and not end up with too-wet feet) and discovered the lower garden was relinquishing its snowdrifts quite nicely. In the morning when Longsuffering Spouse went out to do chores, there was snow all over this bed. By 2 pm, the snow-waves had receded and these little fellows were making their presence known. 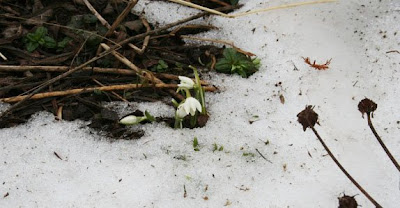 Snowdrops are nothing if not determined. I can almost hear them talking. "Okay, the snow is leaving. All together now, push..." 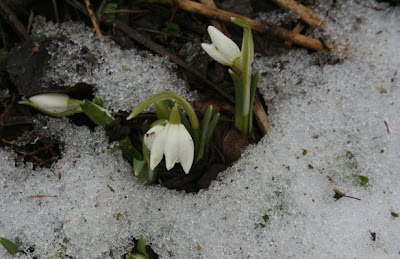 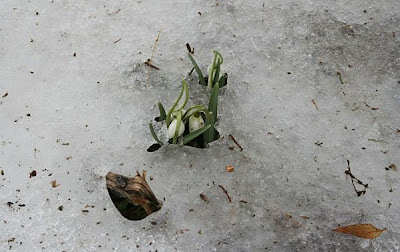 These little fellows had to come through ice, but they were coming and that was that.
Now, it was lovely mild yesterday and then it started to rain last night. And it rained. And rained and rained and threw it down. Today, we went up to Cumberland county to the annual bull sale at the Maritime Beef Testing Station. No, I wasn't buying a bull or shooting the bull...I have enough of that to deal with, what with the current government of doughheads in this province. I was on assignment. It was interesting, but only to those of us who happen to be interested in agriculture and where our food comes from. I'll save that for another day.
I slept most of the way up, and we went the highway anyway. We decided to come back via the back road in Hants county, one we know very well. We'd heard about some flooded conditions. Well, how bad could it be? 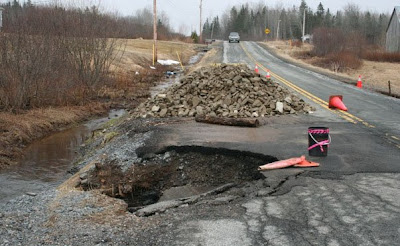 Um...quite bad, actually. This particular washout was going to be fixed before nightfall, but it had a mate on the opposite side of the road. Can you say, "crumbling infrastructure", you idiotic Fiddling Fool premier? (I don't like OR respect 'Rodney, can you tell?) 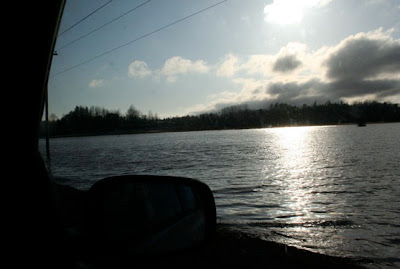 Lovely drive by the seashore. Only thing was, this was down in Hants county, probably about 15 minutes from where Nancy Bond lives; and this is supposed to be a meadow with a small pond and brook. Today, well...more like a lake! I don't know that the Peepers will be out here today, not just yet. 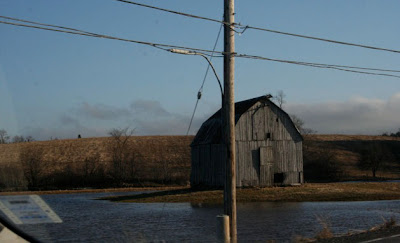 On the opposite side of the road, more flooding. No barn is an island, except when the waters come along. Some of these areas are off tidal rivers that spill into the Minas Basin of the upper Bay of Fundy, so when the tide is high, the water is...way up! 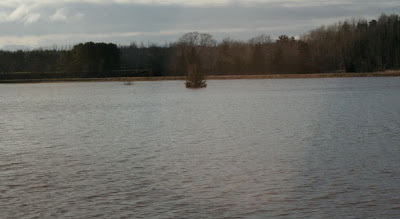 Another spot that is regularly a field with a brook...not a lake with trees sticking out of it. Hubby was driving, I was shooting through the windows of the car because really...we didn't dare pull to the side of the road, after having seen the earlier crater. 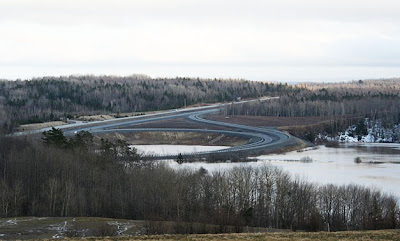 Coming down the main highway near Hantsport, we saw the RCMP (our provincial highway constabulary, as well as that serving many communities) had blocked off the first exit into that town, which lays alongside the very tidal Avon River AND the Halfway river. This is all new highway infrastructure...and the whole area around the exit/access roads is underwater. Probably part of the road too, down in the flood plain area. We couldn't tell, but we doubled back at Bishopville and looped around for another look. 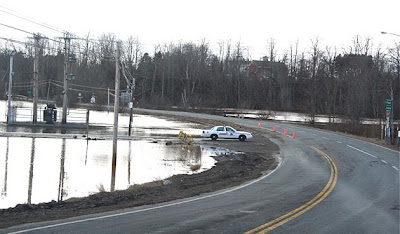 This is the road leading into town, the other end of that highway pic above. All that water isn't supposed to be there--on either side of the road. But it looks like the Halfway has a jam somewhere, and the water couldn't get back out to the Avon and the Basin. The tide was going out, so I hope this all lets go before the tide comes back in again... 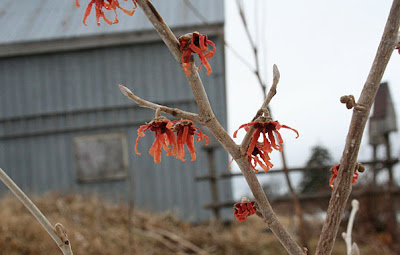 We carried on homeward, and arrived before dark. Yesterday despite the snow in that lower garden where the snowdrops were poking through, Hamamelis 'Diane' had decided she was clear enough of snow to explode into bloom. Today, she looked even happier. 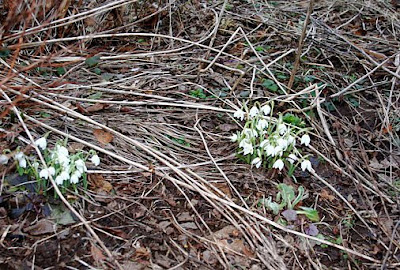 And the tenacity of the snowdrops paid off, as the last of the snow had melted off and they all started popping up with great enthusiasm. Yea for snowdrops, always. The late, great garden and cat lover Beverley Nichols wrote in one of his books that snowdrops were best observed laying flat on the ground looking up at them. Mine are a little too tiny yet for anyone but an elf to be able to look up into, and it's far too boggy. But...spring is waking in earnest. 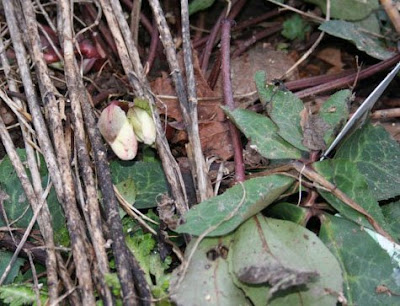 My proof? Oh, looky here, Frances! 'Ivory Prince' Hellebore has made it through winter and all that snow again. Yippee! Now, I'll drag the Christmas tree off the back deck (where it has been stuck since New Year's Day due to a winter's worth of snow.I'll chop it into pieces and put it around the hellebore to protect him from whatever April is planning next.
Because yes, although it's spring, it's spring in Nova Scotia. And the only thing predictable is that this is an unpredictable season.