Letters Across the Pond: Sylvia begins

A couple of weeks ago, everybody's favourite Non-blog-owning blogger Sylvia contacted me with an idea. Inspired by the exchange of letters between Carol of May Dreams Gardens, Dee of Red Dirt Ramblings, and Mary Ann the Idaho Gardener, she thought it would be fun if she and I did something similar, here on bloomingwriter. We have a slightly different angle; we both live on the Atlantic and on basically the same latitude. However, she's 'across the pond' in England, and I'm hanging off the Bay of Fundy (a very large 'inlet' from the Atlantic) in Nova Scotia, Canada, and we have rather different climates, temperatures, growing zones and other challenges. It's a good way to go exploring another part of the world, and hopefully you'll enjoy coming along on the trip.
For those of you who don't know Sylvia, she does wonderful occasional guest posts at Tulips In the Woods and is a faithful commenter and supportive participant on Blotanical. I'll do my post sometime in the next day or so, as work has me on the road tomorrow, but for now, please give a warm welcome to my fellow horto-epistolary adventurer, Sylvia! 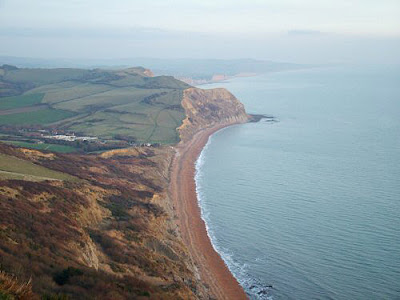 Thank you for hosting our exchange of letters, I think it should be interesting and fun. I am glad that Carol of May Dream Gardens gave us the idea, thank you Carol. Though we live on a similar latitude and get similar day light hours our temperatures are very different, so I will start with telling you a bit about the area I live in and the effect this has on my garden.

I live in west Dorset, which is in the south west of England, if you look at a map of England, we are just to the west of a central point by the sea. I have always lived in West Dorset, though I have lived in different places around the area, rural villages and small towns. I now live in a housing estate on the outskirts of a village. This picture was taken by my son while walking along the cliffs. I can’t see the sea from my house but I can see these cliffs.

The sea has a big effect on our climate, first because Great Britain (England, Wales and Scotland. UK includes Northern Ireland) is an island. The sea moderates the temperature, giving us relatively mild winters for our proximity to the North Pole and keeping our summers cool. We also have a complex effect called the Gulf Stream which also moderates our temperatures, particularly in the west of the country. Because I live about 2 miles from the coast, my garden is milder than further inland. The nearer to sea the milder the winters. The sea also bring in mists, particularly in the summer, though these usually burn off by mid morning. The hills around also suffer from fogs, which can make driving fun! 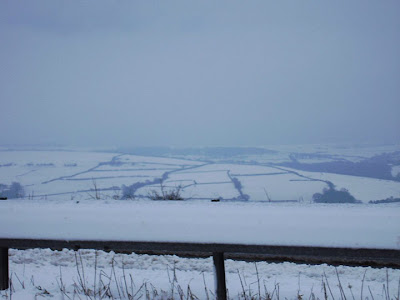 We have a lot of hills around us, not big hills but small ones, separated from each other by valleys. They are usually quiet steep, you know it when you walk up them. As you know all gardens have micro climates and the number and variety of our hills increases this effect. Being in the west of England we get lots of rain, which is great for the garden - if not the gardener! My garden is half way up a hill, looking west wards, this means that the sun is slow to reach the garden in the morning but we get a good amount of sun during the day before it sets behind the hills across the valley from us. 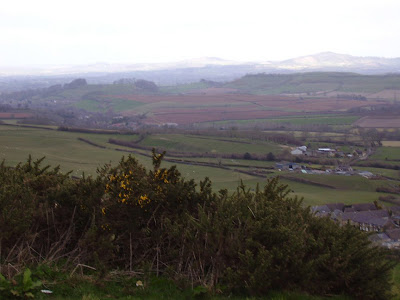 Facing west we are also exposed to the westerly gales that come across the sea, perhaps you are sending them to us! It is interesting that you have had a colder winter then usual and so have we. This is my 11th winter in this garden and 6 months ago I would have said that my lowest winter temperature was -3C but this winter I recorded -9C in the garden. We have had two separate falls of snow that have settled on the ground and more frosts than I have had before in this garden. The picture was taken on 5 March, I was on my way to work, one snowy morning. This was taken through the car windows, while waiting my turn to go down a steep hill. It feels like we have had a proper winter nearer to those I experienced as a child, including the chilblains! 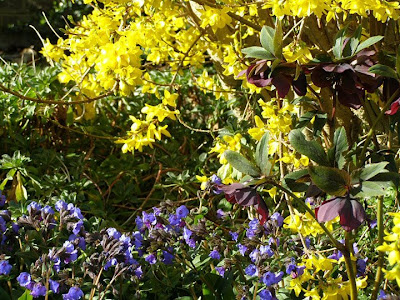 I am glad that for us spring is here. The days are warmer though we can still get frosts up until mid May. Spring is a long season for us, we have had the snowdrops, most of the crocus have finished flowering and now daffodils are everywhere. The magnolias have their white buds ready to open, the last few years we have had frosts in April browning all the magnolia flowers, so we are hoping for a good display this year. I couldn’t resist this picture taken in my garden, last weekend, just 2 weeks after the snow.

We have had a couple of weeks of sunshine and I have been able to do some gardening over the weekends. Now the days are so much longer and our clocks go back next weekend (29 March), I hope to spend an hour in the garden most evenings from next week. I have been sowing seeds for flowers and vegetables (on windowsills) besides developing some new areas of the garden, gradually we are reducing our lawn. I have a new tiny bed for vegetables, which I will tell you more about another time. Compared with yours my garden is small but I understand that things are on a smaller scale here compared to Canada, I am looking forward to reading more about where you live and your garden.

Email ThisBlogThis!Share to TwitterShare to FacebookShare to Pinterest
Labels: just for fun, Letters Across the Pond, planting tales