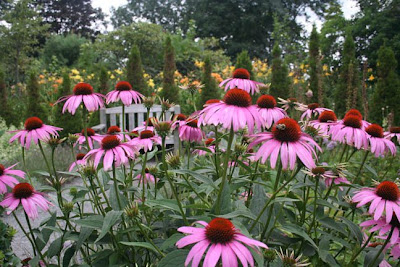 Coneflowers are definitely a plant I can't get along without in our gardens. They were one of the first perennials I put in at Sunflower Hill, and they are so pleasing to the eye and to wildlife that I've just kept adding them.
Despite their preference for good drainage, they do well for me, maybe because I've put them where the drainage is the best, and amended those beds with lots of compost and other organic matter to ensure decent drainage. They bloom for a long time up here, which just adds to their appeal, and they come on in mid-summer when some other plants are winding down. Some of them keep going until a hard frost, and probably more would if I were better at deadheading.
We started out with the standard purple and white varieties, but then breeders began releasing new cultivars on a regular basis, and my addiction grew. And grew. And grew. 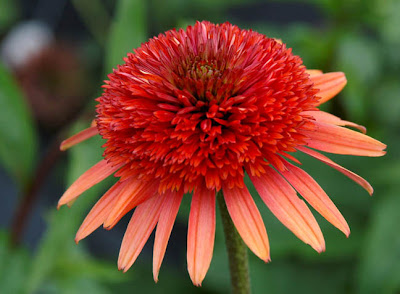 E. 'Coral Reef' is far different from the old-fashioned coneflowers we all know and love, but I can't wait to get my hands on it. Some don't care for the double-flowered varieties, but so far I have yet to meet a coneflower that didn't incite instant plant-lust in me.
(Photo by Terra Nova Nurseries.) 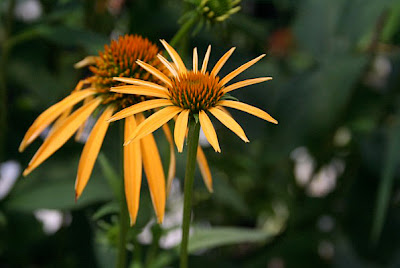 The first new-coloured varieties to be released, at least that I heard about, were two from the Chicago Botanical Gardens breeding program. I first saw 'Orange Meadowbrite' and 'Mango Meadowbrite' (above photo) at Canada Blooms five years ago, and tried the plants a year or so later with mixed success. My speculation was that they didn't care for the freeze-thaw cycles of a Maritime winter, but I was also concerned at the size and health of the plants when I bought them. Sometimes plant companies are in such a rush to introduce new varieties that they grow them on a little too fast without doing proper hardiness testing. However, last year I picked up two very-well-grown plants, one of each Meadowbrite, from my friend Rob Baldwin's nursery, and I expect they will return this spring. 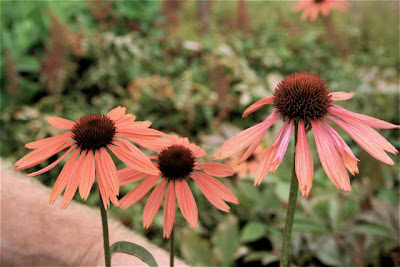 One of the exciting colour lines comes from Itsaul Plants in Georgia, who have at least half a dozen colour forms in their 'Big Sky' series. I managed to get both Big Sky 'Sunset' and 'Sundown' several years ago, but 'Sundown' is the only one in the lineup now. 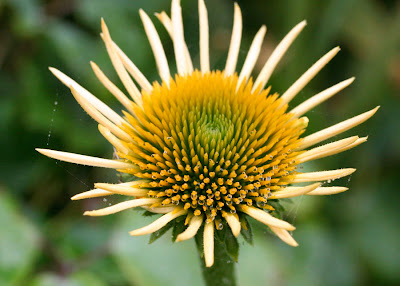 'Big Sky Sunrise' is one of my favourites, with its soft yellow petals, and it's done quite well for me here. It's nicely fragrant too, and definitely a bee and butterfly magnet. 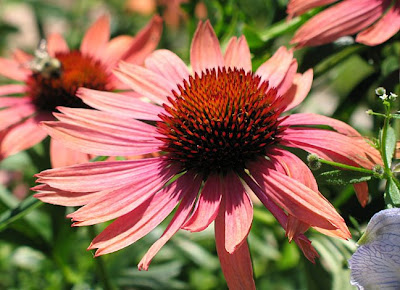 'Big Sky Sundown' is a handsome plant, but I can't always tell it apart from 'Sunset' especially if the labels go among the missing. 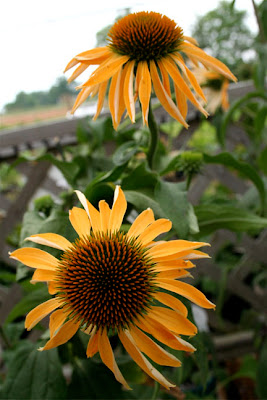 'Harvest Moon' has a handsome gold colour, not that irritating brassy yellow of many later-summer flowering perennials. I wish it would multiply more rapidly but maybe I'll just have to get a couple more plants to add to the grouping. 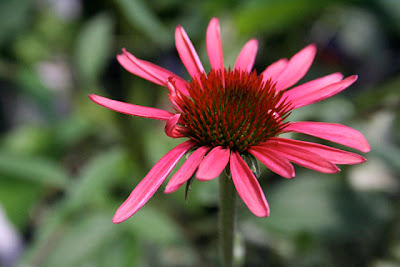 'Twilight' is probably popular with those fond of the movie and book series with the same name (count me out there, yawn), but I bought it for its nice red central cone and because I'm trying to collect the whole Big Sky Series. 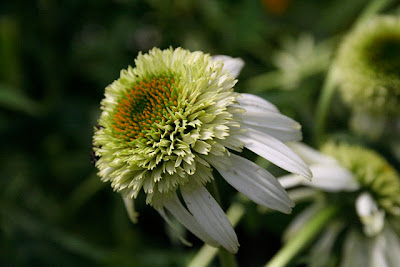 I extolled the virtues of 'Coconut Lime' in a previous post, but it's such a pretty thing I had to show it off again here. 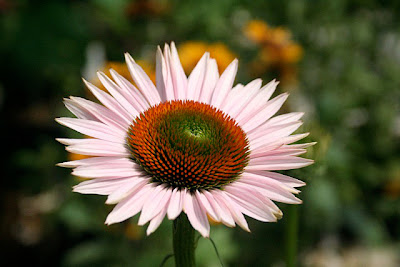 Pale pink is NOT my favourite colour, but I bought 'Hope' because Terra Nova Nurseries dedicates this to breast cancer survivors and to the memory of those lost to the disease; they donate a sum for every plant sold to a national association dedicated to finding a cure for the disease. I plant it in memory of my former mother in law, Marilyn, who was taken far too soon by this damn disease. 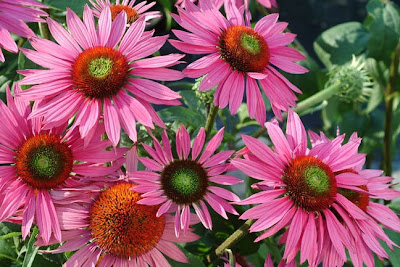 (Photo by Terra Nova Nurseries.)
This is the well named 'Green Eyes', and its striking green cone is enough to make me track it down and tuck it in among the rest of the coneflower collection. 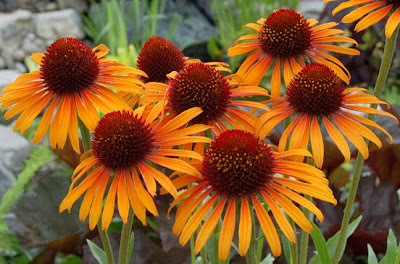 (Photo by Terra Nova Nurseries.)
Now we come to the 'Oh-my-gawd-I-must-have-this' cultivars. As a former volunteer firefighter, I simply MUST add E. 'Flame Thrower' to my garden, don't you agree? 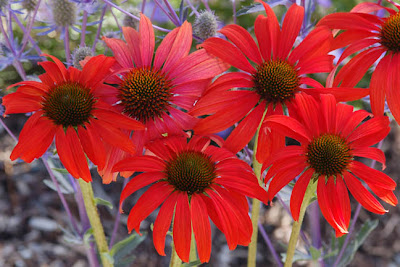 (Photo by Terra Nova Nurseries.)
I'm not sure what wag decided to name this beautiful plant 'Tomato Soup', but it's about the reddest of all the coneflowers. It's not available around here yet as far as I know, but when it is, you KNOW I'll have it. 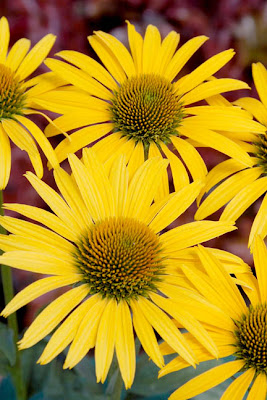 (Photo by Terra Nova Nurseries.)
Also from Terra Nova comes the equally waggishly-named Mac N Cheese. I may pass on this one because it's a lot like Sunrise and E. paradoxa, (one of the parent plants in some of these colourful crosses) and I'm not a fan of Kraft dinner. 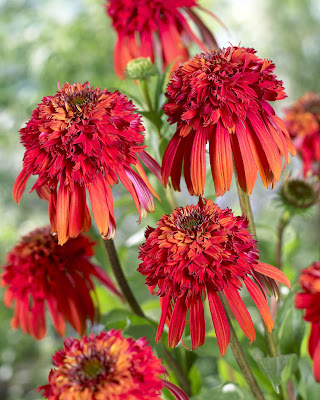 (Photo by Visions Photography )
Then there's this, which I have to have no matter what. Kylee mentioned it a few posts back, as has Graham Rice, and I haven't gotten this worked up over a coneflower since 'Green Envy' several years ago. Meet 'Hot Papaya'. What a perfect name for this plant, and why do I have a sudden urge for a papaya with hot sauce on it? The breeder of this plant also brought us 'Coconut Lime', so I'm hopeful to have 'Hot Papaya' joining the ranks in our garden within a year or so.

You know what? The original plants were called purple coneflowers, but I've never found them to be particularly purple, more of a magenta--a colour I love, but it's not purple. I wonder when the breeders will actually give us a truly purple coneflower to add to the collection? 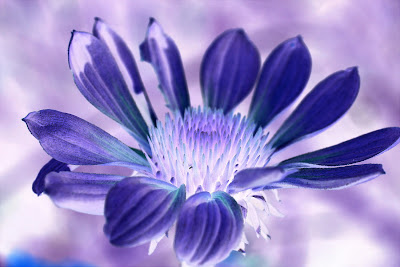