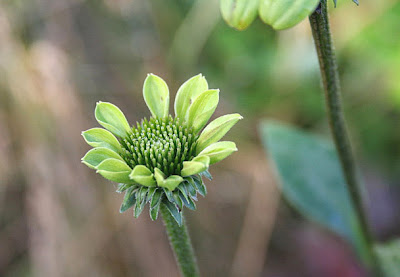 My apologies for seeming to have fallen off the radar the past few days. Because of some interesting events in my life in recent weeks, I've taken on a new project that is both highly challenging and highly satisfying. However, it is keeping me VERY busy, and also out on the road some. So as sometimes happens to us all, I have gotten behind in my blog reading, commenting, and even my own posting. Rest assured, however, I'm still around, just busier than a Nova Scotian snow-shoveller with only a teaspoon with which to clear the drifts. 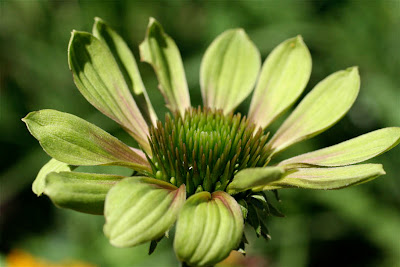 All the weather tantrums of recent weeks, coupled with the blossoming of spring in some of your gardens further south/west/'nother continent/hemisphere has got me craving green in the very worst way. And I don't mean the green that forms in the bottom of my vegetable crisper when we forget there's a cucumber in there. I'm looking for signs of gardening life. Since I won't see them for a while, I turn to my photo albums. And since several of my blogging friends have been talking about green-flowered plants in recent posts (and if I was less tired I'd go find the links...) I had the urge to talk a bit about green flowers. 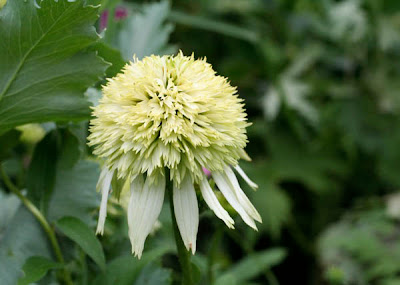 I suppose for some people, the notion of a green flower is a bit bizarre, since normally we're craving all kinds of colourful blossoms in shades of blue, rose, red, gold, orange, and purple. But I love green flowers, in part because they are not hugely common, and because they're fresh and wonderful and just appeal to my delight in unusual things. So I'm sharing a few of my favourites, including two echinaceas; the delightful and perfectly named 'Green Envy' (top two photos), which I've had for two years and just adore, and the more comical but equally delightful (and delectably named) 'Coconut Lime'. The latter doesn't look so much like a coneflower to the purists, maybe, but I like its shaggy, mopheadedness. Is mopheadedness a word? If not, it should be! 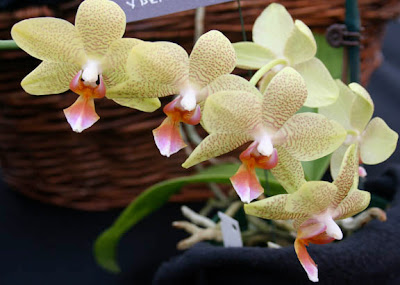 As those of you who read one of my favourite blogs, Our Little Acre, know, Kylee scored herself a bargain phalaenopsis the other day, and it's one of the handsome greenflowered varieties. Although I've yet to meet a phal. that I didn't love, the green or greenish-yellow flowered types, like Phal. 'Golden Music' are particularly appealing to me. 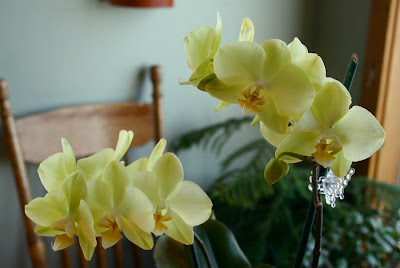 This is my own green phalaenopsis, sadly nameless other than 'Jodi's prolific green monster' (I believe that's what Longsuffering spouse nicknamed it last year. It's still resting, which means I should get my act in gear and move it into a better lit location and get it forming flower stalks 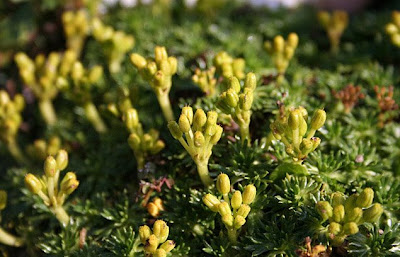 From the truly exotic and unusual, we visit something equally unusual but not quite so showy. This is the alpine Bolax, (I believe the species is glebaria but I'm too lazy to go find my records right now). It's a native of South America, but it grows in an alpine trough whic I overwinter inside the greenhouse--unheated, but protected from wind, rain, snow, sleet and other assorted insults. It's a very cool plant, slowly forming a mat, and very plastic-looking in appearance. 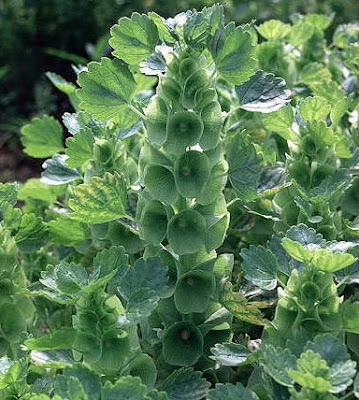 This is the annual Bells of Ireland, a truly cool plant. The green 'flower' is in fact a bract, or modified leaf, with the tiny creamy object in the centre the actual flower. I've grown these from seed and had fun with them, but they have declined to reseed for me, and I find germination very spotty. They have a lovely delicate minty-lemon scent to them which just adds to their charm, and they're very popular with florists. 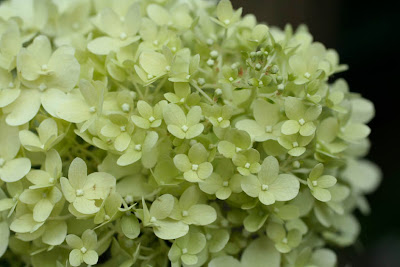 I'm very fond of hydrangeas, as I've written before, and this is the Proven Winners PeeGee type 'Limelight.' I love this plant. It hasn't given me a lick of trouble, it flowers like mad maniacs, the flowers gradually fade to tan (and a few of them are still hanging on, the last time I checked. 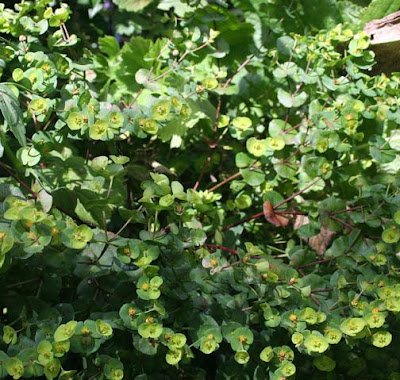 Now, the purists among us might debate the colour of some euphorbia species and cultivars, preferring to call them chartreuse or acid-green or yellow. But I'm looking at the bracts surrounding the flowers of this Euphorbia 'Efanthia', and they seem decidedly green to me. Whatever you call them, I like them. 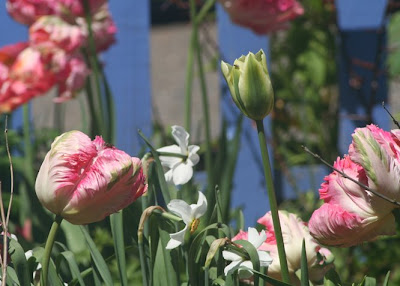 It's no secret that I am also highly fond of tulips, especially the viridiflora types. I believe we have 'Groenland' and 'Apricot Parrot' (fading to pink from apricot) in this photo, and I like these later-blooming tulips even more because they present these intriguing colours and patterns when a lot of other plants have begun their riot of rainbow shades; they're a bit more subtle, and soothing as the heat of late spring begins to find us. 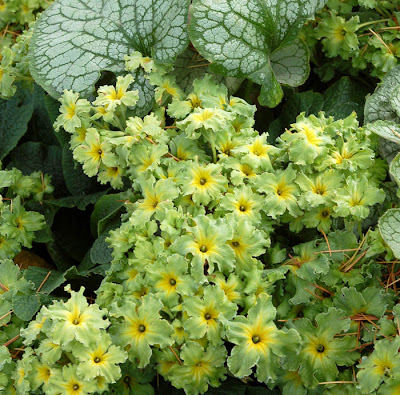 And this is one of those plants that makes me jump up and down and declare "I want I want I want!" Primulas do very well for me, and that's almost enough to make me go after 'Green Lace', but for one detail; the literature I've read put it at zone 6, and I'm a mixed zone 5 a-b, depending on where in the garden you go. It's still a new introduction so I may be good and hold off for another year. Unless I find it in a nursery, and then there's no guarantee that Urgent Plant Seeking Madness won't strike me suddenly. 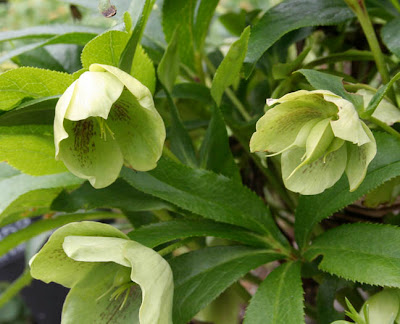 And last but never least, a viridiflora that causes me both joy and sorrow/frustration. A green flowered hellebore caused me to fall in love with these plants nearly a decade ago, and I've been dallying with them for the past six or seven years. As many of you know, until last year that dalliance was mostly an unrequited love affair, but last spring, with the help of Faire Frances, I did succeed in getting several plants through to joyous blooming. I'm not quite ready to try the lovely green hellebore again just yet. Not yet. I keep telling myself that.