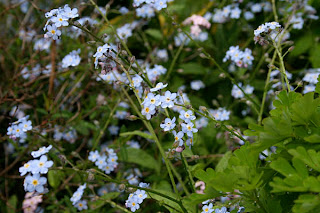 Two years today since my father won his fight with Alzheimers. I remember my mother saying to me a year or so back that he had lost his fight—and I corrected her to say that he won it by being free of it. So I’m pensive today, but I hear my father’s wise, funny voice whenever I’m out in the garden. I’ve written about him before, of course, and so much of the memory garden is due to him. Dad is one reason for the lacy froth of Myosotis everywhere, in blue, white and pink. And for why I plant mint in containers, always!

Still on the subject of lost loved ones, my former mother-in-law’s birthday is only a few days away, and her Butterfly memory gardening is doing well. I realized, too, the other day, that the edging done by my darling longsuffering spouse has shaped the bed to be quite like a butterfly itself. It wasn’t intentional on his part, but we both agree that it’s neat that it worked out that way. 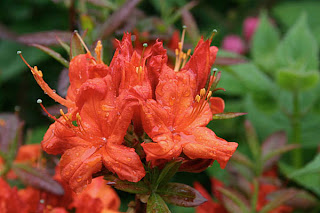 It’s a rainy though warmly humid day today, with abrupt drownpours that come and go quickly, washing down the dust and perking up everything nicely. The planting and replanting I did yesterday looks pretty happy as a result; I tackled one of the front beds, moving short plants forward into the new area gained by LSS’s edging an extra foot out of the grass (yippee!), and adding new plants. The Fireball hybrid rhododendron that threw itself at me at Gerry’s Nursery in Centreville on Saturday has been happily installed, and it works well near an offspring of The Bleeding Heart That Ate Scott’s Bay (the biggest old-fashioned bleeding heart in the province, I reckon!) 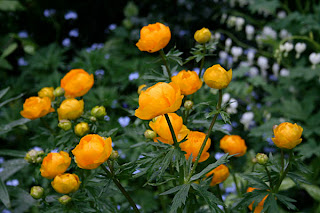 In a different but equally happy orange theme, here’s another ‘common’ but delightful plant: the orange flowered globeflower. These blossoms are larger than the yellow ones, and I have another cultivar that has huge orange stamens in the middle. Delightful plants, always well-behaved. 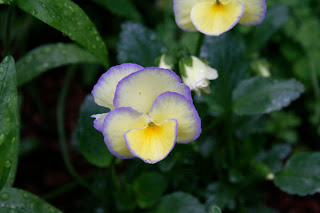 The cheerful little English violet Viola cornuta ‘Etain’ caught my eye at Spencer’s nursery in Shelburne a few weeks back, and I brought home two—only one of which survived to be planted out. Not because of the nursery—Spencer’s is an awesome place to visit—but because (ahem) the gardener kept the plants in the house for a few weeks before deciding where to put them—and one was within reach of the always hungry and vegetarian-inclined Simon Q, who munched the plant down to a nub. Fortunately, the other plant has established nicely, and while I don’t expect to have viable seed—or to produce plants that look the same as this one if the seed IS viable—I’ll have to do something to make sure I have these again. They look especially nice juxtaposed with the deep purple Johnny-jump-ups I have everywhere. 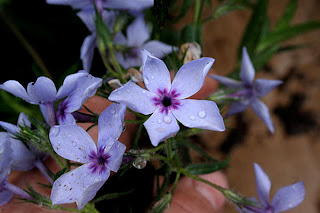 We all have plants that we especially love, and one of my favourite families is phlox; especially those with fragrance. This is Phlox divaricata ‘Chattahoochee’ and it has a lovely scent. I haven’t planted it yet (I got three of them to mass together at Gerry’s Nursery in Centreville, if you’re wondering) but it will be somewhere near the walkway or the deck so we can sit and smell them and be happy. 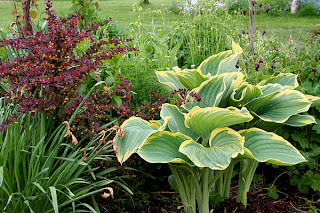 Although most of today’s photos feature flowers, I had to include this shot of two of my favourite plants: barberry ‘Rosy Glow’ and Hosta ‘Sagae’. ‘Sagae’ is one of the big hostas, and while mine is only a couple of years old, it’s got a pretty impressive growth on it already. Because these photos are small, you can’t see the colour echoing going on; there’s a creamy yellow-white columbine in the background, and also the deep chocolatey colours of Geranium phaeum. A purely accidental colour grouping and echo, but it tickled me when I noticed it. 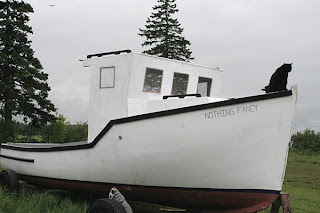 And I leave you with a definitely non-floral photo. My longsuffering spouse is quite a handy guy, and one thing he is very talented at is fixing up fiberglass fishing boats. This Cape Islander isn’t very big, but she's going to be beautiful when he’s finished—and of course his labours will be helped along with the always-helpful Rowdycat, who LOVES to help ‘Daddy’ when he’s working on a boat. This is the fourth one in our yard that Rowdy has claimed for his own. I don’t know that he’d be a good seafaring cat, but he’s a good yard sailor, at least.