Life on the funny farm

Suddenly it’s nearly Sunday again, and where has the time gone? Well…digging in the dirt is always a way to spend a lot of time around here. Actually, it’s been a case of digging up weeds, digging up perennials and dividing them, digging up manure and adding it to the big bed out back that acts like a swamp, and then adding more soil on top of the manure and rotted straw to create something resembling real soil. Well, it’ll be real soil in a few months; the bed I created this way last year is now soft, friable and delicious looking, although I haven’t sampled it other than in getting it under my nails, ground into my feet, and so on.

It will surprise no one who knows me to find that I’ve been out planthunting again. Yesterday I collected some astilbes and hostas from some people I know in a small community near ours. They have a majorly impressive daylily collection—when I asked Doreen how many they have, she sheepishly confessed, “I don’t know!” Mind you, they just put in some new ones so that may be why they don’t have their count up to date. They also have irises, and while I don’t know if I got this one from them or not, it’s a charmer—a little dwarf that is just too lovely. Pity they flower for such a short time. 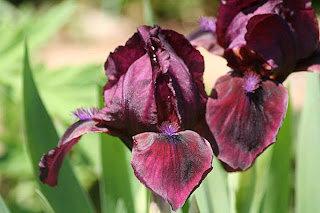 To add to the wine and chocolate garden, I had to have this Chardonay Pearls Deutzia. I wish the flowers wouldn’t open—the pearly buds are so charming—but I love the colour of the plant most of all, of course. 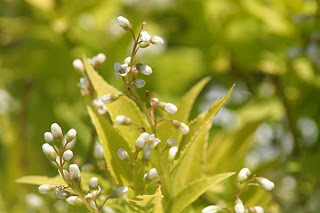 In the shade garden, things are still doing well, including the always delightful Virginia bluebells.Mine are young, as I’ve inadvertently dug them up in the past, mistaking them for something else. But this year they’re well labeled and I put two plants close together to start a clump. If they spread—brilliant. Go for it! 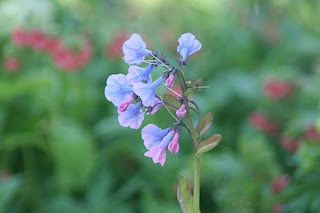 I’m not a primrose expert—I’m not an expert on any plant, just a general plant nut—but when I spied this orchid primrose at a nursery, I had to have it. Immediately. And others who saw it as I drove it around with me needed to have one too. I bet the nursery has sold out of them. Wonderful plants! This is my first primrose of this sort, and it’s in the shade garden which stays moist as well as shaded. People are often amazed that under spruce trees could be moist. That’s the benefit of living on clay with springs running through the land, I guess. Astilbes and ferns do well in that bed too. 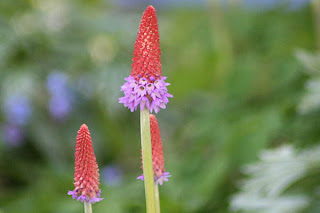 One of my goals in the past couple of days has been to catch a few of the hummingbirds when they’re swarming. After many attempts, I think we did pretty well with this one, though I have another photo (not as good) with seven in the picture! 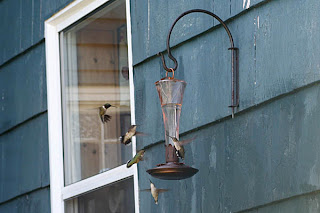 Not surprisingly, I’m incredibly sore and tired tonight, but in a blissful sort of way. Because after supper, I initially thought I’d go back to the gardens, but then the big brown eyes of one of my favourite beings (next to my spouse and the cat children, of course, caught my attention: 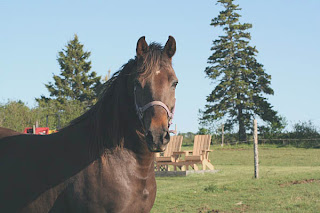 This is Leggo my Eggo, my Morgan horse. I refer to him as my thousand pound child. He’s a big boy, and a brave, energetic fellow who will go anywhere I ask. Sometimes, he bounces a bit like a dressage horse, doing airs above the ground when we haven’t been out for a while. But he’s a darling. There’s a saying that goes something like the outside of a horse is good for the inside of a human. Three hours on Leggo, up in the woods looking at spring wildflowers, and I’m tired but sore. 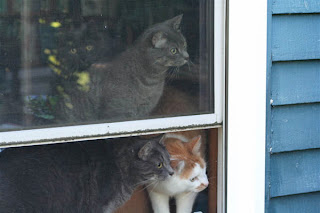 And the bad catchildren--four of them, Spunky, Mungus, Simon Q and can you see Toby's eyes? What are they looking at? 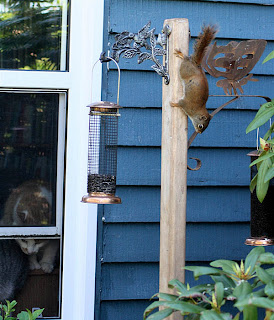 Oh. That explains it. Fortunately, they're on the inside, and Mr. Squirrel is on the outside. We don't usually have squirrels up here--they stay in the woods, avoiding the three senior cats that do go outside. Tigger, the oldest of the herd, actually got spry and chased the squirrel last week for about fifty feet before he decided a nap was a better idea.
Tonight, most of the catchildren are in the office with me--hanging out in the windows, listening to the Junebugs glunking and buzzing, and whirring their way up the window screens. Thankfully, the Junebugs are outside, not in...occasionally one gets indoors and it's quite hilarious watching the cats chasing it. Til they catch, eat and recycle it, of course.

More plants next time...but I think it's time for a snooze now. Good night all, and good gardening from beautiful Scotts Bay, Nova Scotia.