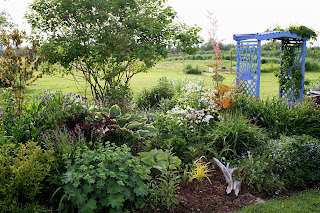 What does a hardworking freelance writer do when she’s written seven articles for various publications (the equivalent of a month’s worth of work) in four and a half days?
She takes Friday afternoon off and heads to a friend’s nursery, of course.
This time, I was smart and took our Tacoma. And an umbrella, given that the sky turned amazing colours just before I was ready to head to Windsor… 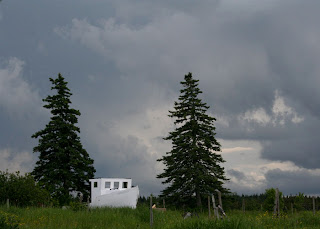 Drove through the thunder and lightning and major rainfalls, and when I reached Windsor, things had settled down there. Rob Baldwin, owner of Baldwin’s nurseries, had called me earlier in the week to say that the milkweed seeds I’d given him had germinated and grown on into nice sized plants and did I want a flat? Since I had it in my head that it was time to get a few trees…and as I said I’d worked very hard all week… 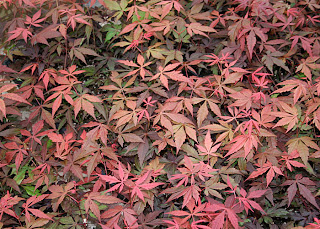 Rob is one of those plant people who can propagate anything; this spring he seeded a whole pile of Japanese maples from seed he’d collected…and I think every one of them germinated. He has baby trees everywhere…gave me a flat of seedlings to take home, divide into half, and plant out to test for their hardiness in my windy cold locale. 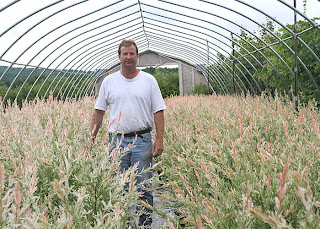 We went over the entire nursery, starting in the prop house and working our way up through the various areas where his shrubs and trees are. Like me, he’s very partial to Nishiki willows…but he has dozens, where I have one… 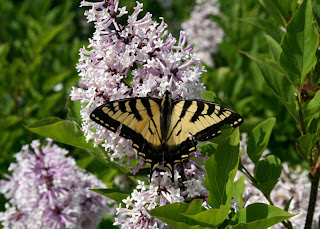 The Preston and Miss Kim lilacs were blasting fragrance all around the nursery yard, and we sneaked up to see how many tiger swallowtails were hanging around one stand of lilacs. The answer was—only three or four at that moment; but they were very happy with themselves.

About the time we finished poring over the plants and deciding what I needed to bring home, the sky turned those amazing bruise colours again. Lightning split the sky and it began to absolutely thunder down torrential amounts of rain. (yes, my Ohio friends, I thought of you and hoped you were having some too) We were a little less pleased when the wind swirled up like a banchee all of the sudden, and when hail entered the mix, but it gentled out again after a few minutes into merely rain. We’d already gotten my truck loaded, though, and what’s a little wet among friends?

So what did I bring home today?
A flat of milkweed seedlings
A flat of Japanese maple babies
3 Japanese Larch
1 Black Lace Sambucus
1 Nugget Ninebark
1 Bigleaf Linden
1 cutleaf sumac
1 red oak
1 Ohio buckeye (a nod to my Ohio gardening/blogging friends, of course!)
Tomorrow, it’s treeplanting day. These aren’t large trees, but that’s the way I prefer them; I bring home 2-3 gallon pots with plants that are three or four feet tall, and they establish themselves very nicely. Mind you, I was deeply, deeply awestruck by this one weeping, tricolour beech…stunning colours, but also a bit higher priced than I can afford. I’ll wait til Rob propagates them and buy a young one in a few years time. 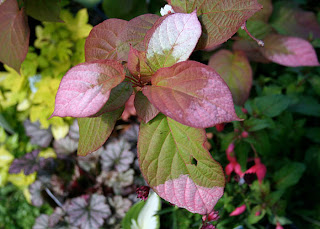 Back home, the rain had only lasted a brief time, while there’d been major flooding in other parts of Kings and Hants counties. The sun was out and I wandered around looking at the freshness of everything.

I know I’ve mentioned being besotted by foliage shapes, colour and textures before; here are some of my favourites. After several years of thinking about it, I brought home a male hardy kiwi vine a week or two back; it’s just starting to get its really awesome colour now, though I haven’t planted it yet. 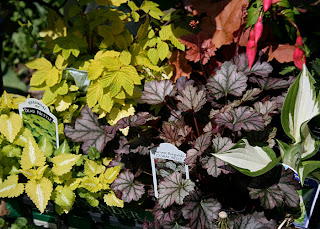 During the Yarmouth trip, you’ll remember I mentioned collecting a few new plants (okay, maybe more than a few…) Here are some of them: ‘Gold Nugget’ Lamium; ‘Harvest Burgundy’ heuchera; Hosta ‘Reverse Patriot’; a gold aruncus, I think it is (the Junebugs are out and I don’t wanna go outdoors with the flashlight to look at the tag); Heuchera ‘Peach Melba’; and there’s a fuchsia of some sort leaning over too. In the background (I know it’s there) is the variegated porcelain vine I got last year. It’s much more demure than its all-green cousin, but I hope we’ll have berries this year, because they are SO amazing. 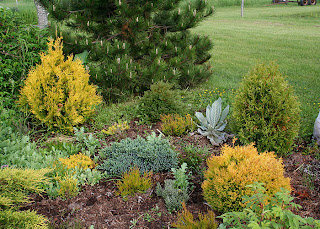 Up in the back we have a small but growing bed of conifers, heaths and heathers; including ‘Rhinegold’ thuja, ‘Heatherbun’ chamaecyparis, ‘Blue Star’ juniper, ‘Jeddeloh’ eastern Hemlock, ‘Sunkist’ thuja and ‘Sherwood Frost’ thuja. Regular emerald green cedars bore me to small bits, but I love my funky coloured ones! The heaths and heathers have settled in admirably, and have changed from their striking winter colours to their summer glory. I love the flowers too, but just the foliage makes me gleeful. You can’t see the dawn redwood, Metasequoia glyptostroboides, but it’s there, and doing nicely. 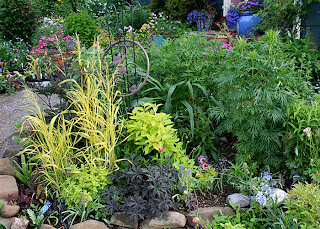 Out front there’s an exuberant mixture of flowers and foliage both, including my black and gold mixture of plants; and a whole lotta flowers in containers. In the past week everything that’s been in the ground for a while has gone slightly nuts. Probably in part it’s due to the mushroom compost I feed the beds, along with seaweed meal. It would give many gardeners a trauma, all that colour and textures and floral mayhem, but it makes me happy right down to my tired and dirty toes. 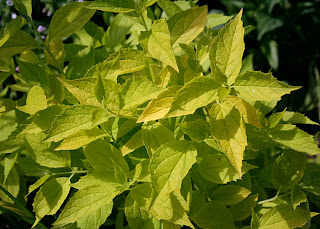 There’s one mystery plant in the front bed, and I do NOT know what it is. I can’t remember where I got it, if it was a gift or a purchase. It’s woody, it hasn’t flowered yet, it isn’t all that big, and it’s very, very gold. The leaves are bigger than the various blazing neon spireas (I have a few of those, too!) and I’m stumped. Do you know what it might be?

I spent a good part of the evening cleaning out more of the big mixed bed out back; tomorrow it gets straw, manure and soil to raise it a good six eight inches in places, then the planting will begin again.