Punting garden gnomes & other true-ish tales: How to Survive a Garden Gnome Attack 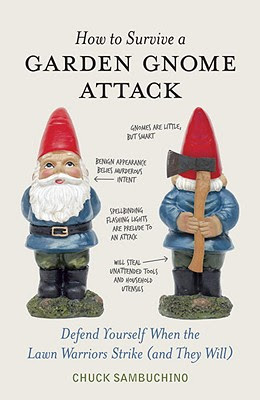 The following is a true story.
I dislike garden gnomes immensely. I don't know if I suffered trauma as a child by having one fall on my foot, or if I was stalked by one as a college student studying horticulture, or what the rationale might be. All I know is that I've never seen the appeal of them, and that one on television flogging some travel site makes me want to punch the television. There were never any gnomes in my family's gardens, and suffice it to say there have never been, nor will there ever be, any in mine.

A few years ago, I was on a plant hunting expedition in Labrador, which is the northern part of Newfoundland, the part stuck to the rest of North America. Through some sort of series of errors, the place where we were all staying was overbooked, and I was the (not) lucky one who got to stay somewhere else...which was at the worst B & B I have ever encountered. Between the musty bed and bedclothes, the religious homilies festooning every wall, counter, and other surface, and the shower/bath with no mat and the world's slipperiest tub (I still bear the scar on my shin), it was, quite frankly, the night from hell. About 4 am, I gave up trying to sleep in the musty, too-hot room, packed up my suitcase, and left, planning to sleep in my car the rest of the night. I'd already paid for the night, lest anyone think I skipped out. I wouldn't do that, no matter how peeved I was.

But out by the parking area, there were two stupid, tacky, cement gnomes, sitting there in their very gnomeness. In the dark, I encountered one by banging into it with my sandal-clad foot. This just increased my irritation. Both gnomes were then gnocked over. It might have been the wind.

At least I didn't do what one of my friends said I should have done, the next morning after having breakfast with the rest of them. His idea was that I should have kidgnapped one of the gnomes and taken it to Gros Morne, placed it on the summit of the mountain. Gno, thank you. I would never pollute Gros Morne in such a way. There's rules against degradation of nature, you know.

All this is by way of prefacing my review of Chuck Sambuchino's new book, "How to Survive a Garden Gnome Attack." It was sent to me several weeks ago by Ten Speed Press, and I just got around to reading it this week. 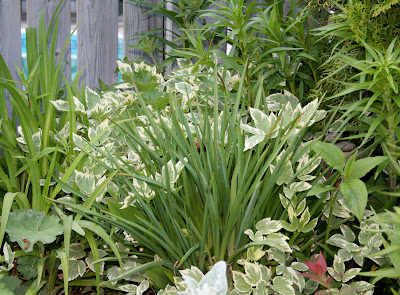 I had long suspected that gnomes were an evil lot, bent on world domination. It's as plain as the gnose on your face that they're also in cahoots with the evil goutweed, which grows just the right height for gninja gnomes to hide in. Can you see the evil little devil hiding in this patch of goutweed? GNo? Works well, doesn't it?
Okay, the book. It's hilarious and creepy, all at the same time. It depends on your sense of humour, (or in some cases, lack thereof). Sambuchino writes well, and while the tone is deeply serious to reflect the danger lurking in lawn warriors, the reader can't help but hope that the author didn't bite his tongue too often whilst writing, as it was firmly planted in his cheek.
Do YOU know how to gnomeproof your yard and garden? Do you know how to secure your home so that these little monsters can't get inside for an attack? Sambuchino leads us through everything you need to know about coping with these insidious, nefarious creatures. You can survive when they attack, and Sambuchino proves how they inevitably will get cocky enough to make an attempt on your life. Fortunately, he's the man with the answers, though I was expecting some reference to duct tape and plastic sheeting in there, too.
A mention of the Battle of Thermopylae should give the history buff amongst readers some understanding of how to oppose gnomes in battle. There's even some recommendation about how to dispose of the dangers of "roaming gnomes." My personal favourite is to dispose of said creatures in the Laurentian Abyss, one of the deepest parts of the Atlantic Ocean, but in case of emergency, probably leaving a gnome at the door of any mall on Black Friday will do the trick.
Now, let me stress, this isn't high-faluting "Litter-a-chur", nor is it an essential for the gardener's library in order to increase one's gardening abilities. What it is, is very good fun, a nice addition as part of a gift basket or as stocking stuffer for a gardener or for anyone who has ever muttered about the clutter of gnickgnacks on lawns and in homes. We all need a little more humour in our lives.
And far, far, fewer gnomes.

Email ThisBlogThis!Share to TwitterShare to FacebookShare to Pinterest
Labels: books, just for fun, Newfoundland and Labrador