Pollen on my nose and other true stories 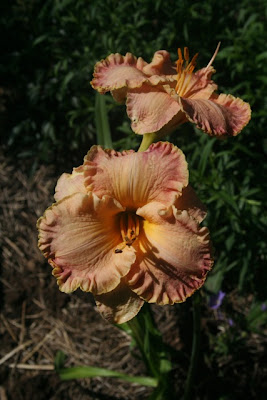 Mid- to late-July until August finds me dealing with a peculiar condition. It manifests itself as yellow, orange or rust coloured stains on the end of my nose. The diagnosis is easy to make, and the condition not at all serious. It means it's daylily and lily blooming time again, and I'm sticking my nose into as many flowers as possible.

Remember when there were only a handful of daylily colours and forms available? Or so we thought. There are actually thousands of named cultivars, probably thousands more that are unnamed or mislabeled. I first saw a huge display of hemerocallis cultivars at Red Lane Gardens, in Prince Edward Island, about a decade ago. That was the beginning of my love affair with these durable, versatile plants. 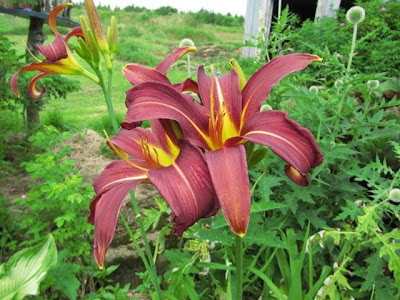 When my friends Wayne Ward and Wayne Storrie decided to develop a daylily nursery, I couldn't have been more excited for them. Canning Daylily Gardens has been steadily growing for the past few years, and tonight little Wayne told me that they have 1200 cultivars on display in their gardens. They don't yet have that many for sale, but they have somewhere around 700, I believe. Certainly there is something for everyone.

While I know some of my plants by name, others have caused me some confusion over the years. Tonight I got smart and took a half dozen with me down to Little Wayne to get them identified. My plan is to map out where they all are so that I don't have to go through this every year. The beauty in the top photo is one of last year's purchases, 'Inherited Wealth.' The wine-coloured one above is 'Dark Star'. In my garden, it's almost as tall as I am, about 5 feet. 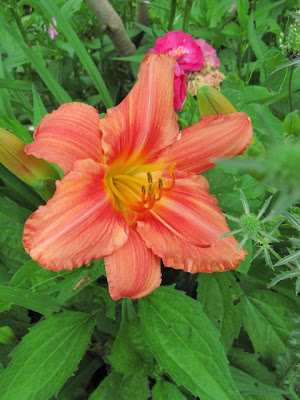 'South Seas' is one distinctive daylily, though this photo doesn't do it justice. Its colour is a vibrant coral/salmon, with hints of pink, and awesome fragrance. It sends me running across the grass to smell it when it begins to bloom. 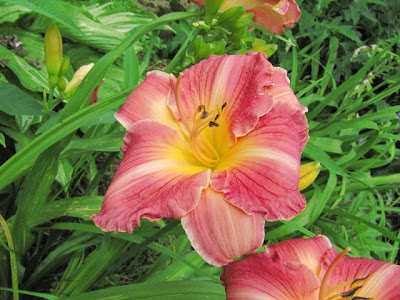 'Mateus' is a prolific variety, and I have divided mine and planted it in several other spots. It too is fragrant, and I like the pale midribs and ruffled edges to this beauty. 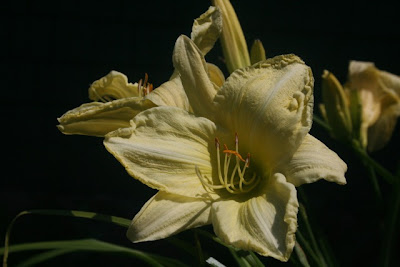 When 'Ice Carnival' first came out, it was proclaimed as being one of the closest to truly white daylilies available. It may depend on what your soil is like, but to me it's more the colour of lemon pie filling with the meringue whipped into it. Softly yellow, very soothing. 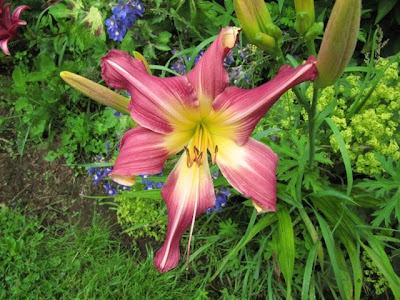 It took a while to figure this spider out, but it's 'Wind Frills'. It didn't bloom last year; the Waynes gave it to me several years ago when I was still uncertain about whether I liked the spiders or not. I like this one, that's for certain. 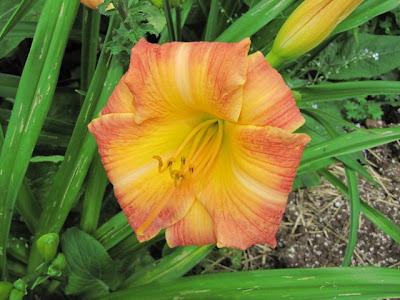 This is 'Shango', which was one of last year's purchases. I love the varieties that are a mix of rose and gold, for some reason. And the very dark ones. And the ones with the dark eyezones. And... 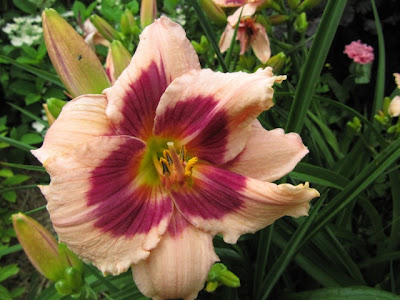 Here's one with dark eyezone; 'Wineberry Candy', which is in my wine and chocolate garden. 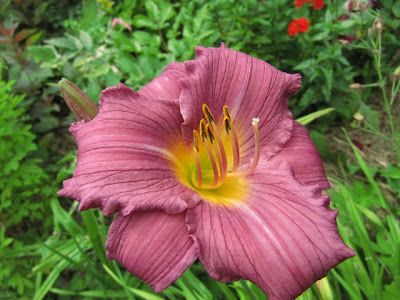 When I take photos of daylilies, I invariably focus on the flowers because the only drawback to these fabulous plants is their ordinary foliage. Unfortunately, you can't see the size of the flowers to scale. This is 'Chicago Royal Robe', we think, but I've had it since the first year I planted daylilies here. Not a big flower, but it sure is floriferous. 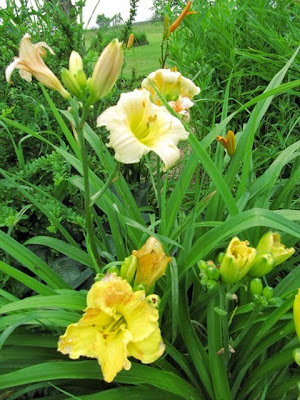 Not the best photo, but in the foreground is 'Smuggler's Gold', while in the midground is one of my favourites, 'Swiss Mint', another nearly-white variety with exquisite fragrance. 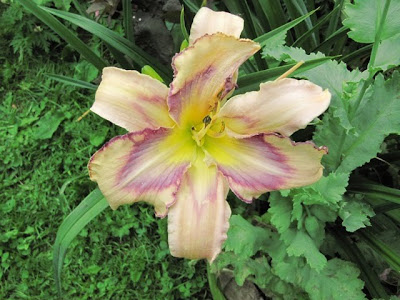 Slugs have been a problem on some varieties, and had tried to get a good grip on the edge of 'Destined to See', another of my favourites. It doesn't have much scent, but with all those colours it's okay. 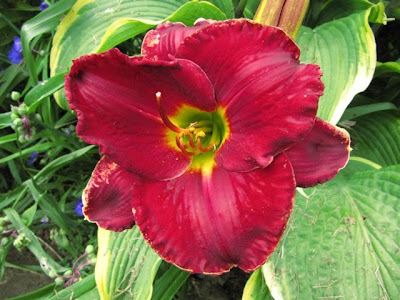 Somehow, the photography gods smiled on me today and I caught 'Roses in Snow' showing off its true red colour very nicely. There's only one problem: it's not displaying the white edging as much as it is supposed to. The Waynes aren't selling this one anymore, probably because it is such a diva, but I'm keeping mine because I love the rich red velvet even without the white accents. 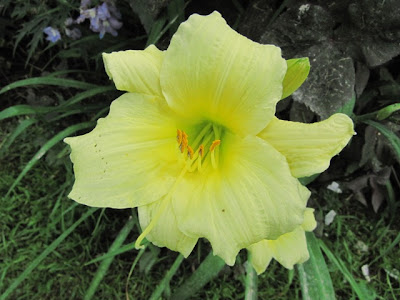 This little fellow didn't have a name when I bought him for 5 bucks from a plant table five or six years ago. He's dependable, with a huge number of blossoms and a long bloom period, and I've taken to calling it 'Yellow Duckling' because it blooms near the spot where the ducks come up to eat their feed. 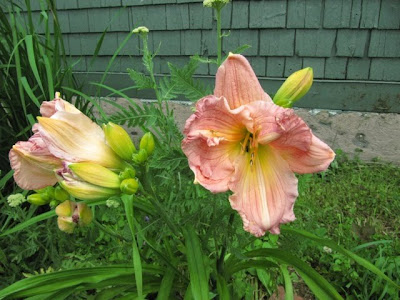 'Tani' is a real pretty little star--actually, she's not that little, boasting big flowers when they are fully opened. I was impatient and took her photo before the blossom had finished unfurling. 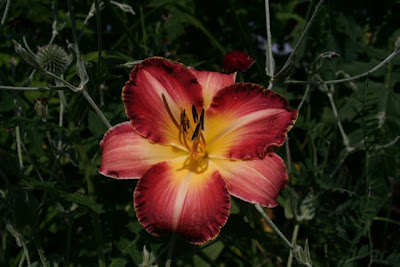 I love the quaint, funny, and sometimes truly bizarre names attached to some of the daylilies by their breeders. This, for example, is called 'Romeo is Bleeding.' I forget now where I bought it, and it doesn't come up as fancy as some photos show it, but its rich colour and whimsical name made it a star in my garden.
This is just a few of the daylilies that are responsible for my pollen-nose. There will be more to come in future posts; one of the cool things about these plants is how they just pop into bloom over night or in the early morning, so each morning presents me with new jewels to gaze at. And new blossoms to get my nose into.