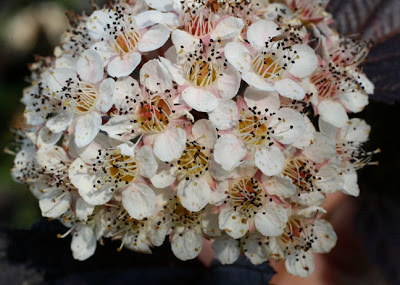 Regular readers know that I’m just as crazy about interesting foliage as I am about flowers when it comes to my garden. So it will likely come as no surprise to find that I’m enamoured of ninebarks, partly for their whimsical name, partly for their reputation as awesomely handsome and tough, four-season shrubs.

The ninebark (Physocarpus opulifolius) is native to parts of Canada and the United States: the good people who maintain the plant database at University of Connecticut indicate that its native range is from Quebec through to Tennessee, and I did see it in Missouri when I was there last August.

A member of the rose family, it’s a deciduous shrub, with multiple stems in its native form.
What makes the ninebark so desirable in the garden? There are several characteristics, one being its cultural requirements. It’s decidedly easy to grow, handing full sun to partial shade, and is very hardy. Most literature give the hardiness zones as ranging from 2-8, although for some cultivars the coldest zone recommendation is 3. Since I’m in 5b, I can grow any of them, although I’ve had mixed experience with the gold-foliage varieties. More on that in a bit. Ninebarks tolerate moist soils although they do appreciate good drainage. That being said, several of mine are in areas that don’t have ideal drainage, and they are doing just fine.

Some ninebarks can get rather gangly and benefit from pruning, but hold off taking the secateurs to yours if you like the flowers; prune once flowering is complete in late spring or early summer. You’ll lose some of the fruit clusters that show up later in the summer and hang on through fall, but you’ll have a more compact and attractive plant if you’re a tidy nut. Confession here: I have yet to prune our ninebarks at all, but will be trimming down Coppertina very soon.

Plant breeders have done wonderful things to the species, breeding for awesome foliage colour. You can find ninebarks with purple, copper, lime green and gold foliage, and most of these turn beautiful colours in the autumn before leaf drop. AFTER leaf drop, however, is when one of the ninebark’s most appealing traits is on good display: the peeling bark, which shows itself in reddish brown or tan strips on mature branches. 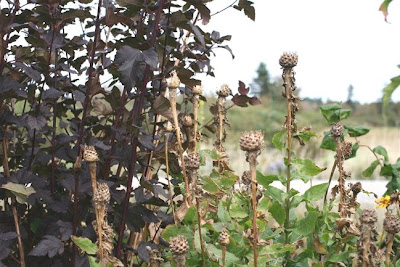 Diabolo: Perhaps the most well-known ninebark cultivar is ‘Diabolo,’ also sometimes called ‘Diablo;’ its it has striking, deep purple foliage, against which the clusters of creamy white flowers show up particularly well. Ours is heading for ten feet tall and looks especially fine when the bright orange Asiatic lilies are in bloom beside it. 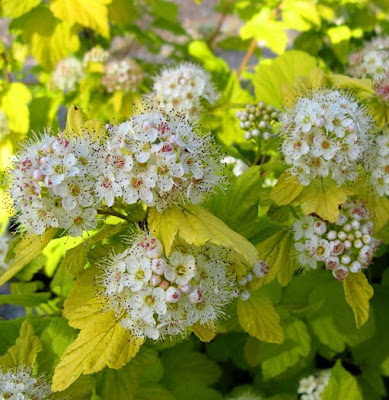 Nugget: I’m curious to hear other gardeners’ experience with ‘Nugget.’ Maybe the specimen I got a few years ago just wasn’t a particularly good one, (given where I got it from, that wouldn’t surprise me, but enough about that), but I found it to be very spleeny, languishing for several years before shuffling off its mortal coil to become a dead Nugget. 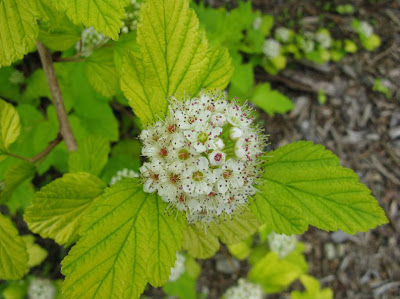 Dart’s Gold. This is a compact variety and is one of the parent plants of the newer variety ‘Center Glow’, another ninebark I haven’t yet tried. My Dart’s Gold is still quite small and has an annoying habit of getting leaf spots, whether because of disease or because it’s too wet where I planted it originally. I’m watching it closely this summer and if it needs to be moved, I’ll do that. (Photo from Kingsbrae Gardens) 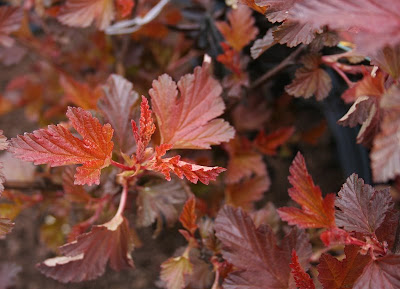 Coppertina: I first read about this variety a few years ago, and then saw it growing in Ottawa. It was love at first sight, much like it was for Echinacea ‘Green Envy’; and interestingly, I have them growing together in the front garden, and find they complement each other beautifully. It’s a gorgeous plant, well named, with coppery foliage that deepens to wine in the autumn. Some have reported mildew problems on their ‘Coppertina’, but it’s not been a problem here as of yet. Or if it has been, I haven’t noticed, because I tend to ignore powdery mildew when it shows up on phlox or pulmonaria. 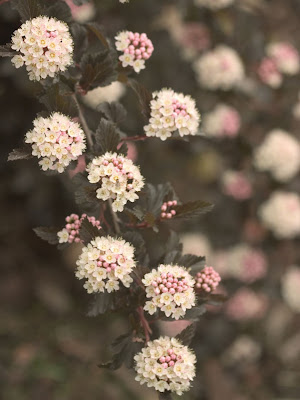 Summer Wine: Anna Flowergardengirl did an awesome post on Proven Winners’ Color Choice shrub Summer Wine, so I’d suggest you check out her comments. I don’t have this one yet, mostly because I simply haven’t gotten around to purchasing it. I’m thinking, however, that I have the right spot for it outside one of my office windows, so don’t be surprised if it shows up here in the not too distant future.