Emerging from the silence--sort of 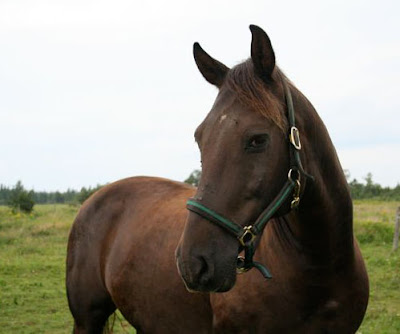 Hi. I'm LeggomyEggo, bloomingwriter's horse. Bet you were wondering what the heck happened to her. Sudden silence after a burst of activity. No, she didn't run off to join a rock band. Or move to Missouri. (She did say that she's thinkin', though, if the Harperites get in here, and McCain gets in down in our beloved neighbour's country...she might have to head for Australia. Or Finland) 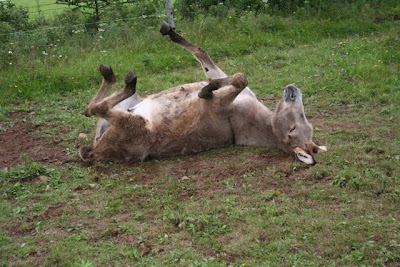 Enough about politics. It's not my strong suit. I prefer the arts, but there ain't no flies on me on most world affairs. Wait. There ARE flies on me. Just a minute here. Let me join my donkey in a fly removing roll.

Now, where were we? Oh yes, my human. She's still here. She's just sick. Been sick for almost two weeks. She had some sort of scope done to look inside her innards and while that didn't show one thing that the doctor was looking for, it set her off to have colic again. No, that's not what humans call it. It's got some long name like diverick-u-ouchis. Or something like that. She had to go to the vet anyway. No, that was the human hospital. My mistake. What do you expect, I'm a horse! 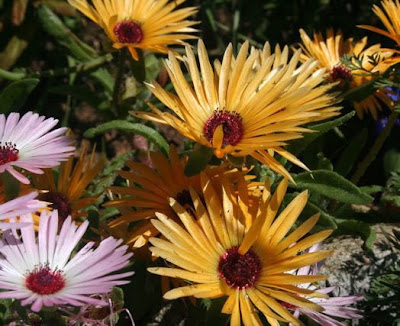 Anyway, she's still sick and she's really cranky (just ask her longsuffering spouse) and so I asked if she'd like me to do a blog post for a change. I had to get one of the cats to type for me, though. My hoofs don't work a keyboard so well. So here are some pictures of plants that are blooming around the garden. I'm going to try to remember what she told me, but she's sleeping again so we won't wake her. She gets even MORE cranky when she's woken up. Just ask the cats. 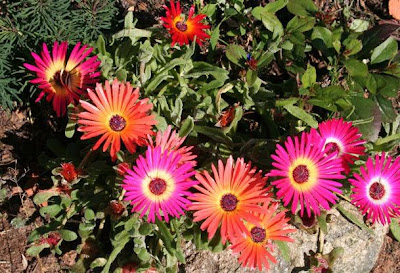 Much of the garden is still soggy and weed-ridden (and that's causing a cranky writer too) but there are still plenty of nice plants in bloom. I don't try to eat the garden. The donkey does, but she's dumb as a barrel of hair. Anyway, this is ice plants. I don't know why they're called that because they're not cold and they're not made of ice. But they are pretty. 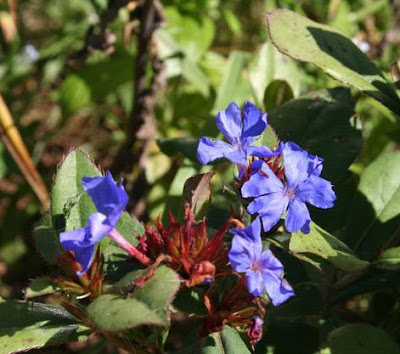 This is called blue leadwort. I guess you can see why. She likes blue flowers. She likes me too, a lot. Oh, yes, the flowers. This is a ground cover, though it's not very big yet. Its leaves turn really pretty colours in autumn. Which is almost here. I should start growing my winter coat soon. 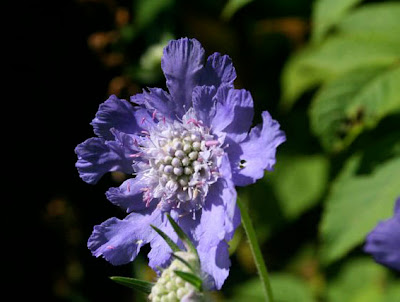 Bloomingwriter calls this a pincushion flower, but I don't see any pins sticking out of it. It's had lots of bees on it this summer, and some pretty butterflies. But no pins. 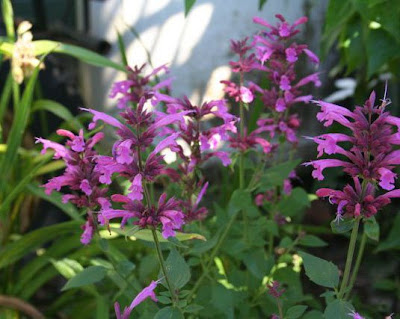 This is called hummingbird mint, and if I were a hummingbird I'd really, really like it myself, because it smells really good, like lemon and peppermints. I like peppermints a lot. Especially the pink ones. Oh. Right, the hummingbirds have left, probably before the big wind and rain event we had a few days ago. So it's just bees and so on that are visiting the flowers now. 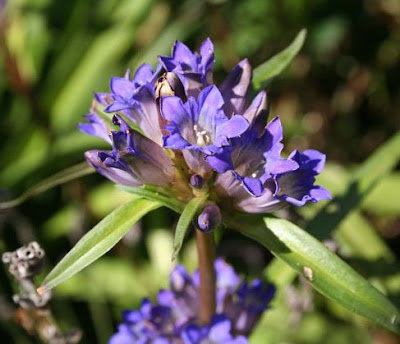 Oh look, more blue flowers. This is a gentian, but I don't know which one it was, and when I asked bloomingwriter, she just went back in the house and back to bed looking grumpy. And the cats don't know how to do a google search. They're pretty crafty, but not that much yet. 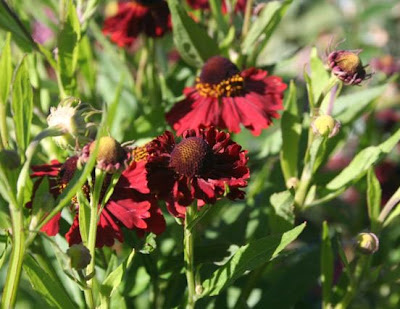 And this is called sneezeweed, though it didn't make ME sneeze when I inspected it. There's a lot of it in bloom around the yard now, in different colours, reds, oranges, yellows, bronzes. I like this one best. Would look nice against my bridle, don't you think?

Well, this has been fun, but not as much fun as running around the pasture. So if you'll excuse me, I'm going to go do just that for a while.

Bloomingwriter will be back soon!

(the above masterpiece was a collaboration between Leggo the horse and Mungus, Simon and Spunky, all of whom spend a great deal of time with their 'mother' especially when she's sick, and like to 'help' whenever possible.)