The continuing tale of hollyhock woe

Confession is good for the gardener’s soul, and I’m never one to shy away from admitting my gardening mistakes—whoops, that’s supposed to read experiments. Real gardeners have experiments, not mistakes, right?

Well, whatever the case, here’s my ongoing tale of woe regarding hollyhocks.

I love hollyhocks. Their old fashioned beauty makes me very happy, and I keep having visions of having a great host of them, up against the house, blooming in all kinds of colours, but especially yellow. I crave yellow hollyhocks, whether single or double.

Trouble is, the garden fates don’t seem to want me to have them.

It’s true that growing hollyhocks is a bit of a challenge in our garden. Oh, they’ll germinate well enough, and grow the first year; but that heavy wet cold clay soil of ours does them in after one too many freeze-thaw cycles, or one too many monsoons in early spring. The hollyhocks generally turn to slimy mush underground, and there we have it. I’ve even tried buying them as transplants, and occasionally have had successes, but usually only with plants that are potbound and prepared to flower because they’re stressed.

However, I’m nothing if not stubborn, and keep trying different areas in the garden. I finally hit on two beds that drain quite well and have tried seeding and putting in transplants in these beds. Last year, a spectacular plant developed and grew with vast amounts of enthusiasm…but bore white flowers.

This would have been okay but for the fact that yes, it was supposed to be yellow.

Before that plant showed its treacherous self, I bought a few transplants that were labeled as yellow, and put them in for this year in several different areas of the garden. When the white ones appeared, I was nonplussed but hoped that the labeled yellow transplants—bought at a garden centre, even—would survive the winter and finally give me my yellow hollyhocks. I wasn’t greedy. I figured if I got one to come into flower, I’d simply keep its seed and put them everywhere.

This year, the first plants to wake up grew enormously—they’re currently about 11 feet tall—and produced all kinds of marvelous, fat buds…

which opened up pink. Very pink. They are delightful, single flowers, and have charmed hummingbirds and butterflies and visitors alike. But they are most certainly pink.

In fact, I checked that plant today, and while one of the spires has toppled, there are all kinds of new leaves, and yet another flower spike is starting to grown. Apparently this plant doesn’t realize it’s November. I figure it will cast seeds everywhere and I’ll be overrun with pink hollyhocks for the next zillion years.

Another plant plant, off by itself in another bed, sheltered somewhat by shrubs. It was slow to get going, and I wondered if it was a seedling…except there was a tag beside it proclaiming it to be a double yellow hollyhock. Eventually it had a cluster of buds, about which I grew excited as they grew in size. They were showing yellow—definitely yellow. I thought victory was finally mine.

Until the day my longsuffering spouse came in the house and announced, “Your hollyhock is open…and it’s peach coloured.”

No way. I flew out the door, scattering cats and plant pots, across the yard to the plant. The buds were still showing distinctly yellow, but the half-opened flower wasn’t really yellow. It wasn’t really peach, either. 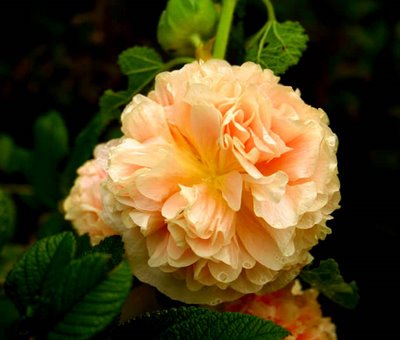 We argued about it, and finally, out of desperation, I proclaimed it to be orange.

“There is no such thing as an orange hollyhock,” my spouse reminded me.

There is now. At least, in our garden.

Now, it’s entirely possible that this is an apricot hollyhock, because I know that such a colour does exist. And transferring the photo I took to the Web doesn't even do the colour justice--must not be a web-happy colour! But I’m in such a snit, even a month after that plant finished blooming, that I’m hoping it sheds a few seeds and presents me with more orange-flowered plants next year. Then at least I’ll have something interesting and bizarre.

Of course, many gardeners have already heard my tale of hollyhock woe in the past, and have been very encouraging, although occasionally a bit smug too. Even my own mother gleefully reported having a gorgeous double yellow plant in her garden. However, gardeners are also a generous lot and have started giving me seeds of yellow hollyhocks. They mail them to me, give them to me when I visited them, even drop them off at our house with a flower to prove that they came from a yellow flowered plant. I’ve planted them all, but I’m beginning to think I’m destined to never have one.

Or maybe we’ll develop a blue one.

That’s my story and I’m sticking to it.