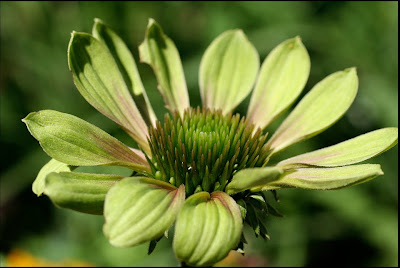 The past few days since author Johanna Skibsrud won the Giller Prize for her novel The Sentimentalists have been somewhat surreal, at least in book-lover-land. Many of us were delighted that a young writer had been given this big boost (and large cheque), and thrilled to bits that our local artisan publisher, Gaspereau Press, had been the ones to publish her AND nominate her for this award. However, many of the so-called Toronto intelligentsia have had their knickers in a right twist because Gaspereau hasn’t had thousands of copies already printed and ready to go to the bigbox stores like Amazon and Chapters. In some cases, I think there's more than a little Green Envy going on (matching the exquisite Echinacea of the same name in the photo above).

There has been a lot of bashing of Gaspereau over this, often by people who don’t know what they’re talking about, but unfortunately also sometimes by people who ought to know better. I won’t even touch the whole judgery tempest except to say I hope the Giller committee tightens its rules about behaviour by judges prior to the winner’s announcement.

The team at the award-winning Gaspereau Press are known for their commitment to quality publishing and printing. Their books are created by hand on old-style printing presses, using beautiful papers and interesting types. I have a number of their books in my permanent library, and have read many others. This isn't a diss at other publishers--I have lots of quality books from many quality publishers. Gaspereau is just...different, in the best of ways. 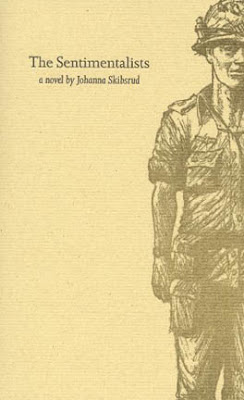 Andrew and Gary can produce about 1000 copies a week of any particular book. They are working away at meeting the sudden demand, but here’s the interesting thing. Although the book hasn’t been available on Amazon, it’s been at a number of independent bookstores. Until the last day or so (I haven’t checked today), The Box of Delights in Wolfville had copies. I’ve seen Twitter comments reporting purchases at other indie bookstores around Canada. There’s also an e-copy available for purchase and download for those who use Kobo readers. (I don’t like ebook readers myself but that’s merely my personal tastes, nothing else. )

So those who are loyal to local book stores are or have been, in many cases, able to sate their desire to read this book right away. Others are content to wait, or to download an electronic copy and then buy a print copy later. The wailings about how much missed opportunity the writer is having because everyone can’t buy it Right! This! Minute! are primarily coming out of Toronto, where the street of the bank barons (Bay Street) is littered at night with homeless people sleeping on subway vents.

Regular readers of bloomingwriter can be forgiven for being puzzled about my passion, as a writer, for standing up for the publisher instead of totally saying “Oh poor thing,” to the writer, and offering hankies to the handwringers whining on the pages of the national newspapers. Well, books are an odd subject in commerce. Bookstores can order them in, and then return unsold copies to the publisher at a later date. So what happens if Gaspereau prints 50,000 copies of a book and has 30,000 copies returned to them? Can you say fiscal disaster?

Bigbox stores have a certain amount of clout, but they also can be bullies, in just this regard. To drawn an analogy between two of my passions, books and plants: I know of several nurseries in this region who had been contracted to grow certain types of plants or cut flowers for the bigbox stores. When BogBoxX store cancels its contract, or declines to renew for subsequent years, the grower is stuck with massive amounts of certain types of plants, which they can’t always market quickly in a reasonable amount of time. See nurseries exit the business. This isn’t a situation known only to my region—I imagine most parts of the US, the UK, and beyond have seen similar situations.

The bigboxes buy in bulk, and set the prices they want to pay, often less than it costs to produce a product, whether a plant or a potato or a well-printed novel. We (gardeners, readers, eaters, everyone) don’t make enough fuss about low-quality crap from China, or produce flown in from thousands of miles away and grown under questionable conditions, or plants sold here that were grown in some warm part of the US (which means they won’t thrive here), or any other number of quality-versus quality concerns. Want something ordinary, the same as thousands or millions of others have? Go to a bigbox store. Want something special, unique, wonderful and less than quotidian? Get it from a local nursery, or from a publisher with a passion for creating not just commodity, but actual heirlooms and works of art. 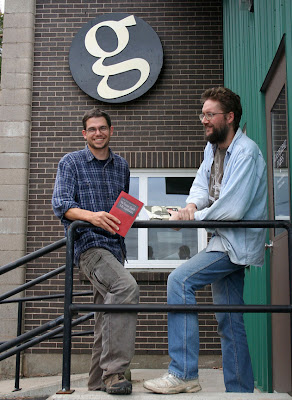 In Gaspereau’s case, as was noted by another writer (I can't remember who or I'd put the link up), they filled the orders to their independent customers long ago, when Amazon or Chapters didn’t perhaps bother to order any copies in the first place. Loyalty breeds loyalty. The bigboxes know nothing of loyalty, so it puzzles them when a small publisher doesn’t fawn over them and impoverish itself to meet their demands.

After a couple of days of reading obnoxious articles in the Post and Globe, people around the country began to post rebuttals and defend Gaspereau's integrity. Some writers are, like me, recognizing that it's a complex story and are hoping that all will be happy soon despite the complexities of the story. No less a sage than Rex Murphy put up an excellent article in the NaPo, including this thought:

I can hear all the objections to this perspective — it isn’t sensible, it isn’t practical, it’s so unfair to the author. In answer to the first two complaints: I say, let’s have a lot more of what isn’t sensible or practical, at least as those qualities are perceived in our fame-besotted, Jersey Shore world. The last objection, that it’s unfair to the author, is more difficult to deal with. Maybe there’s some consolation in the fact that her winning is, precisely because of this story-controversy, now quite singular, and so her book will be all the more welcomed when it does show up in the stores.

Gaspereau, after all, is merely taking a stand for the book — the book itself, as a beautiful object, as a piece of art. I would have expected, even at the higher altitudes of the Giller constituency, some fellow-feeling for that perspective and some respect for the idea that art doesn’t — necessarily — always kneel before commerce and fame.

My friend Ami McKay, a best-selling author and also a Gaspereau-published writer, wrote a post that included a letter to the Globe from another writer, which says, in part:

That Gaspereau Press has been reviled for this incredibly beautiful act of faith is a stunning collective failing of our collective imagination--but it doesn't surprise me given how debased our relationship with art has become. I do have to agree with the final sentence of today's editorial: "The true measure of any book's success is not a prize but its ability to connect with readers."

Johanna Skibsrud is going to be just fine, what with her Giller cheque, her UK agent and contract, and the thousands of copies of the book that have been and will be sold. Gaspereau has a plan to solve their publishing bottleneck which will hopefully make most everyone happy, including their bookkeeper. Andrew and Gary are to be commended for cherishing books as things of permanence and beauty, not merely tossaways to be composted along with the day’s newspaper. And for doing the very best they can for all involved. That's how they roll.

Gaspereau announced this morning that Douglas & McIntyre has acquired the trade paperback rights to The Sentimentalists and will be printing 30,000 copies at once. Gaspereau, meanwhile, will continue to create the handmade copies for purchase by those who desire a unique item. Group hugs for all involved (yes, including Toronto, of course). We love it when a plan comes together.