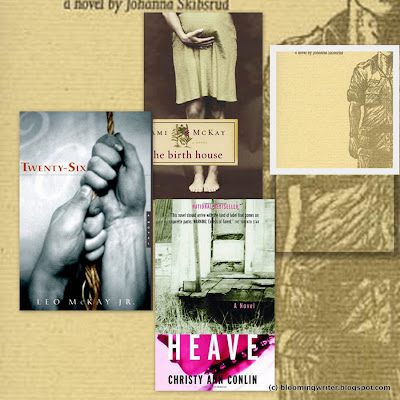 It's been a good couple of weeks for Nova Scotian writers, although not without its controversies. However, I'm very proud of our writers and want to celebrate them, so I'm departing from my usual garden-speak (sort of) to talk about these victories.
To begin with, those in Canada who are listeners to CBC Radio know that the MotherCorp (as it's fondly referred to by some) do a yearly broadcast called Canada Reads. The normal format is for five people, usually literate and somewhat wellknown, debate the merits of five books of Canadian fiction, and each week one book gets voted off. You know, reality tv on the radio, and purporting to be literary. The show has its aggravations, not the least of which it tends to promote books already wellknown and well-bought and read. This year, the producer decided to celebrate ten years of this program, and threw open the doors to the listeners to recommend a top 40 list, which is now whittled down to top 10, and then will be top 5.
Among the top 40 finalists were three excellent works by Nova Scotian writers. One of those has now advanced to the top 10, and I'm delighted about that, but wish the other two could have also taken a rightful spot in the top ten, rather than books that have already been on Canada Reads. The top 40 finalists included:
Heave by Christy Ann Conlin. Christy Ann Conlin lives down the Valley near Berwick, and is someone I consider a dear Facebook friend; we haven't met face to face yet (we writers can be a hermit-like bunch, especially me), but we talk back and forth and share a love for books. Heave, her first novel, burst onto the scene back in 2002, so it's been some years since I read it; at the time I read it once, had mixed emotions about it, so left it lay then revisited it later and enjoyed it much more. Christy Ann has this delectable sense of snark and humour, and her portrait of a young and somewhat tormented woman growing up in Nova Scotia could be the bio of many a young woman, regardless of geography. You can see a short review of Heave here.
The Birth House by Ami McKay. This is one of my favourite novels of all time, and not just because Ami lives here in Scotts Bay, set the novel here, and is a friend. The Birth House tells the story of young Dora Rare, growing up around the turn of the century (19th to 20th) who is successor to the community's midwife and healer, Miss Babineau. I have read this novel 6 times, which is something I do only with books that imprint themselves on my heart. This is such a novel. The Birth House has advanced to the top 10 in Canada Reads, and I hope it makes it all the way, as it is a novel everyone with a love for good writing and storytelling should embrace. To tie this into regular garden-speak on Bloomingwriter, here's a post I wrote about the plants of The Birth House.
Twenty-Six by Leo McKay Jr. Leo is no relation to Ami, but they share a passion for storytelling and an ability to grip the reader with their powerful characters and storylines. Books in Canada described the writing as "tough with a layer of vulnerability", which is accurate and one of the appeals. Set against the backdrop of the explosion of the Westray Mine in Pictou county in May, 1992, an explosion that killed 26 miners but damaged infinitely more minds and spirits, Twenty-Six isn't a tearjerker or a total gloom and doom tale. It does vividly show how an event like the Westray disaster does more than take lives, yet inspires life affirmation at the same time. Leo had a clever plan for raising the popularity of Twenty-Six on Canada Reads, and it was both fun and quite successful.

Last night, the Giller prize, the wealthiest and some say the most prestigious literary prize in Canada, was awarded to The Sentimentalists, by Johanna Skibsrud, who grew up in Nova Scotia although she now lives in Montreal. The Sentimentalists was published right here in Kings County by Gaspereau Press, a small company dedicated to quality literary printing and publishing. Their books are works of visual art to hold and touch as well as to read.
I wrote a review of The Sentimentalists a few months ago for the provincial newspaper. I reread it this morning and stand by what I wrote back then. It wasn't my favourite book ever, but I do look forward to more by Skibsrud because she does have a powerful command of language. Here's what I wrote back in the late winter:

Reading a book in preparation for reviewing it can sometimes be compared to making bread. Once the sponge has been kneaded, the bread is left to “rest” for a period of time before it is completed. When I finished reading The Sentimentalists, Johanna Skibsrud’s first novel, I initially was at a loss regarding how to review it, so left it alone for over a week before revisiting it.

The novel’s premise seems straightforward. The narrator’s father, a US Army veteran with the somewhat incongruous name of Napoleon, is declining in health, which coincides with an implosion in her own life. She moves him from his “palace,” a trailer in Fargo, North Dakota, to share a house in a lakeside town with Henry, the son of Napoleon’s friend Owen, who was killed in action during the chaos that was the Vietnam War.

The town, Casablanca, is a replacement for a town that was flooded to make way for a dam and that still remains beneath the lake, deeply submerged and viewed only through memory. In much the same way, personalities, emotions and stories of the main characters are only seen murkily, as if peered at through waters churned up by currents or storms. Gradually we see more of the characters and discover the haunting story that so affected Napoleon and coloured his whole life.

Skibsrud has said in interviews that the story evolved from conversations with her father, a Vietnam veteran, a year or so after the invasion of Iraq began following the events of September 11, 2001. During that earlier war, her father, then a young soldier, had witnessed the murder of a civilian woman by an army officer. He was so outraged by this event that he spoke out to his superiors, which resulted in an inquiry being held. Although the novel is inspired by this facet of Skibsrud’s family history, she stresses it is a work of fiction.

“‘Remember me when I am dead, and simplify me when I’m dead,’” Napoleon says, quoting a well-known verse by the British soldier-poet Keith Douglas, who was killed in the Normandy invasion of June 1944. Napoleon and his daughter agree that these are the words of “a rank sentimentalist” but also, the narrator writes, “like maybe everything was not such a big mystery after all.”

Before writing The Sentimentalists, Skibsrud authored of a book of poetry, Late Nights with Wild Cowboys, and her skill with word pictures shows nicely in some of the passages. However, at times the novel suffers from a lack of firmer editing. Long, meandering sentences might work well in presenting ephemeral thoughts and ideas in poetry. In this novel they’re used to such an extent that too often they serve to distract and even annoy the reader.

Gaspereau Press is well known for publishing books using quality paper and distinctive covers, creating books that are as much a pleasure to hold, as they are to read. It always puzzles me, however, that this press and others will often include long screeds at the end of a book about the typeface in which the book is set, yet say little or nothing about the artwork used in creating the cover. I particularly like the cover of The Sentimentalists, with its khaki-green illustration of a soldier sliding sideways off into the jacket flap and echoing on the back, much as the events of Napoleon’s life “have been…somewhat sideways to himself.”

As a bildungsroman, or coming-of-age novel, The Sentimentalists succeeds nicely in presenting a journey of growth and possible enlightenment in its narrator character. Where it falters a little, however, is in taking too twisted a road on the voyage in which to tell its tale. That criticism aside, it will be interesting to see what direction Skibsrud’s work takes in the future. 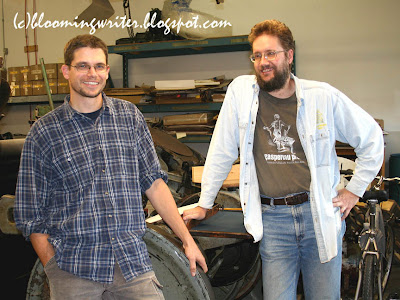 Small publishers/printers like Gaspereau are faced with a real dilemma when a book is nominated for awards like the Giller. Do they print a huge number of copies to go out to bookstores across the country and then have a significant portion returned to them once the glare of the publicity is off them? Or do they hold back on printing more copies until they see what will happen with the award?
Given that the paper used in the book is a particular high quality weight and variety, they have to order it in and it's not cheap nor easy to source in large quantities. Andrew Steeves, the publisher of Gaspereau (shown here on the left with his business partner Gary Dunfield (right), who keeps everything physically running smoothly at the publishing house) writes about their quandaries on their blog, which I hope you'll visit.
All in all, a great couple of weeks for Nova Scotia's literary community, and for lovers of literature everywhere, regardless of where you live. Huge and heartfelt congratulations to all involved!!