Perennial All-stars: New and Nice in 2010 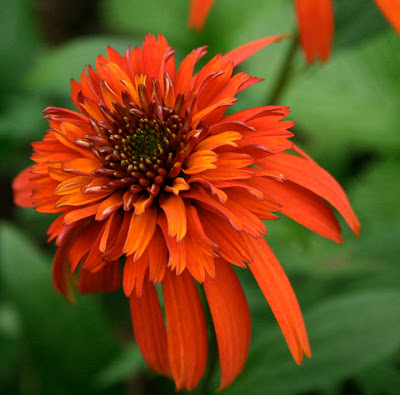 Working on an assignment over the past couple of days took me through recent 'events' in my iPhoto libraries, which as you can imagine are chock-a-block with photos of plants. The outburst of colour did my heart glad, especially as we continue with the drearies (interspersed with light snowfalls that are indicative of what is to come). Naturally, I thought, why wait til the end of the year to do a retrospective? Let's have at it now! So here, gentle readers, are some of the best and brightest of perennials from my gardening season of 2010.
No one who hangs out here regularly will be surprised to see 'Hot Papaya' echinacea leading the pack. Echinaceas are one of my favourite flowers, hands down, and I've been fascinated by the rainbow of colours we've seen over the past few years. Of course, no one has yet developed a blue echinacea, despite the rumour to that effect back in April. 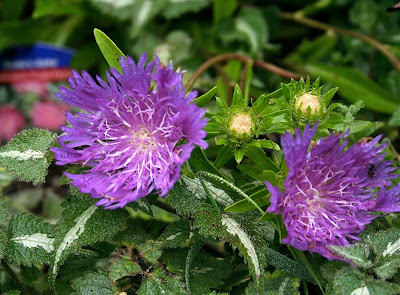 For the purists among us, some of the plants I show here aren't brand new, but they're decidedly new to my garden. I last tried Stokesia, or Stokes' aster, about ten years ago, and couldn't get it to overwinter because it kept being taken out by soggy clay. This year, I had the brainwave to plant it near the echinaceas, and it settled in and thrived. I'm highly optimistic that it will reappear next year--I have it well marked so I don't inadvertantly try to weed it. 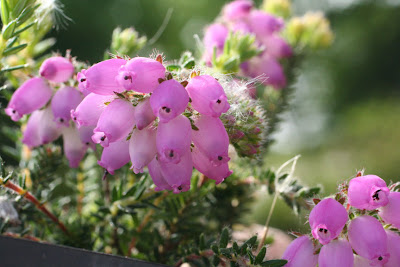 Heaths and heathers are fabulous for their foliage as well as for their flowers, but this is a new and particular favourite of mine, Erica 'Irish Lemon', bought at Bunchberry Nurseries in Upper Clements. The name charms me, as do the huge flowers (for an erica) and the foliage is decidedly handsome. 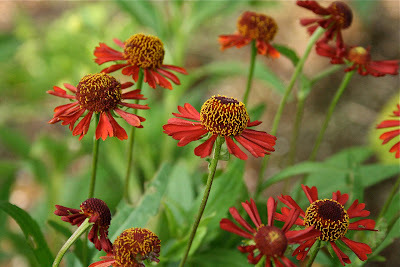 I regularly sing the praises of heleniums, those stars of the late-season garden. It's been gratifying to see more and more nurseries carrying these plants, and carrying new and interesting cultivars, such as this petite charmer, 'Ruby Tuesday', purchased at Ouest-Ville Perennials in Ouest Pubnico. (That would be West Pubnico for the Anglais among us). 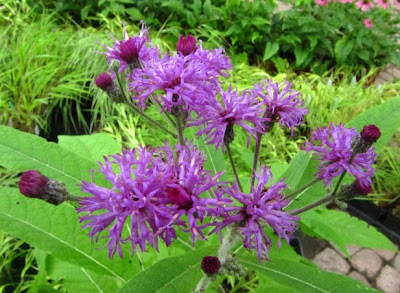 Vernonia or ironweed is a lateseason delight, and is beloved of pollinators, so those two facts make it a must-have in my garden. This is V. crinita 'Purple Bowl', which I found for the first time this year at Briar Patch Farm and Nursery in Berwick. 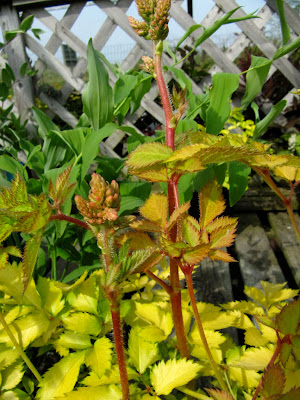 You know what it's like when you spy a plant and you stop dead in your tracks and absolutely have to have it? That's what happened when I saw astilbe 'Color Flash Lime' this past spring. I bought two of them, I liked it that much, for its foliage more than for its pale pink blossoms. The foliage gradually turns more lime green as summer advances, but it's a delight, just like its relative, 'Color Flash'. 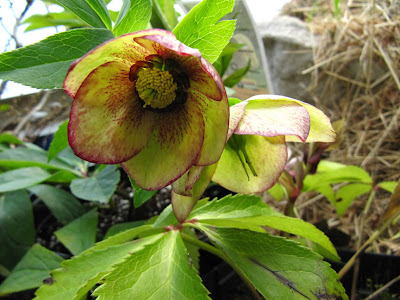 Thanks in no small part to the tutelage of Frances at Faire Garden, I've gotten sort of confident (not too confident as that might cause hubris) with hellebores, and have added some new cultivars since the initial successes with 'Ivory Prince' and H. purpurascens. This year, I fell under the spell of 'Golden Sunrise' hellebore. Can you see why? 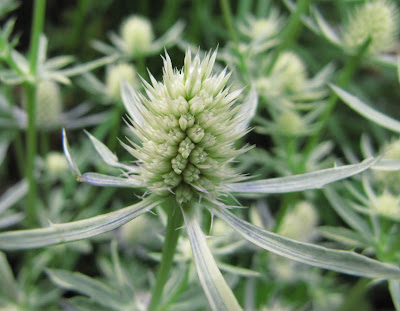 I looked for a photo of the foliage of Eryngium 'Jade Frost', showing its bluegreen, cream, and pink early growth, but couldn't find it. Given to me to trial by Dugald Cameron of GardenImport in 2009, it came into its own this year with fabulous clusters of silvercream flowers and bracts, which gradually enrich to metallic blue. Fabulous, fabulous plant. It seems to be acting perennial so far (touch wood) so I'm hoping it returns as vigourously next year. 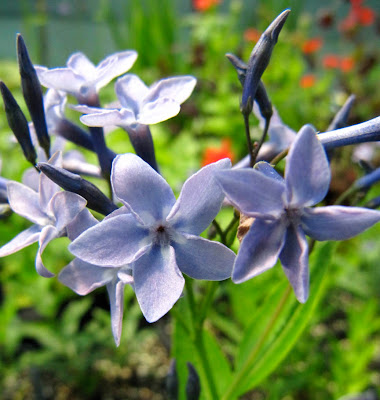 Amsonia, or bluestar, is a highly underutilized perennial, at least in my neck of the woods. I've had A. tabernaemontana for at least a decade, and find it an excellent and no-maintenance perennial. I've never divided it, moved it, or done anything else to it except plant it and enjoy it. This year, I got my hands on the cultivar 'Blue Ice', which has somewhat broader-petaled flowers (seen here), and am happy to have it too. Next year, I'm hoping for a big flush of interest in amsonias, as the Perennial Plant Association have named Amsonia hubrichtii their plant of the year for 2011. 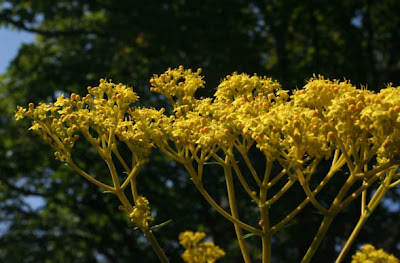 This is a completely new-to-me perennial this year, given to me by plantsman extraordinaire Lloyd Mapplebeck of Hillendale Perennials in Truro. This is Patrinia, a tall, later flowering perennial that works well with vernonia and eupatorium (ironweed and joe-pye weed). 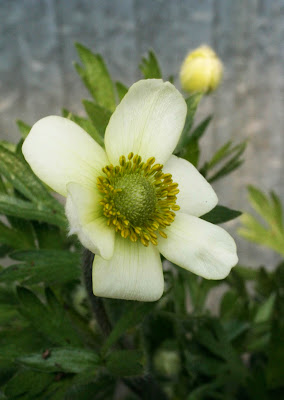 Lloyd also insisted I try this delicately yellow anemone, Anemone palmata 'Luteum'. It bloomed for a long time, and was a big hit with the bees. 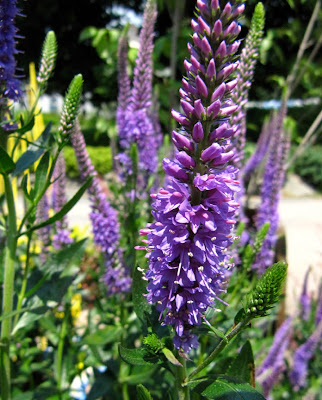 The veronicas and salvias are also a big hit with pollinators, and I was delighted to find this interestingly coloured variety, 'Purplicious', at Briar Patch. Veronicas are such fabulous plants, with such a delightful range of heights, flower types and colours. You can't have just one or two. I think I have upwards of a dozen. 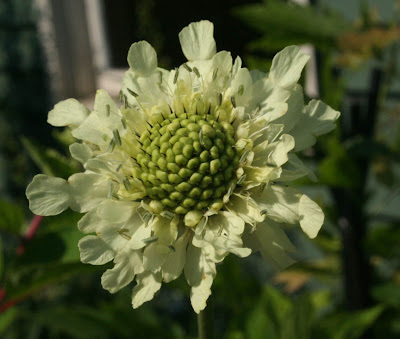 My friend Lorraine Beswick gave me the remarkable yellow scabious, Cephalaria gigantea, back in the spring after I went gaga over it last year in her garden. It did marvelously for me this year, and I'm hoping for seedlings to share with others. 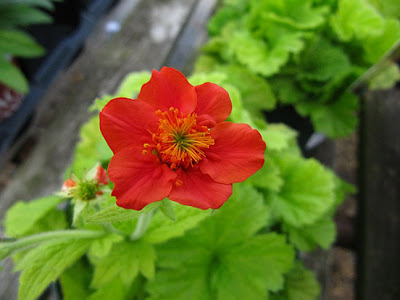 Rounding out today's lovefest, a cool little geum that swept me off my feet in midsummer when I saw it at a nursery somewhere in the province. This is 'Eos', the first geum I've seen with lime-green foliage, which makes a spectacular foil for the brilliant scarlet orange flowers. I'm going to nurture this one over winter, and hope that it will be as stalwart a performer as are 'Mango Lassy' and 'Cooky'.
Have you grown any of these plants? How have you done with them?