For this Skywatch Friday, a wee bit of geography and more than a wee bit of gratitude. We live near the top of the upper Bay of Fundy, home of the world's highest tides. But we don't just have splendid water; we have splendid geography, including the basalt stacks that compose Cape Split. This rocky promontory with its 400+ foot cliffs juts out like an apostrophe from the western side of Nova Scotia's shoreline. It also creates some amazing tidal phenomena. Things can be all very serene, as they do in this photo, which I took from a Coast Guard Zodiac on my way back from a visit to the survey vessel CCGS Matthew, several years ago. 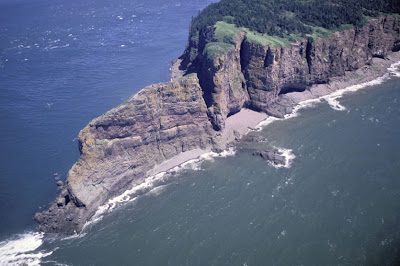 (photo not mine, but I can't remember if it's from NS Tourism or a local photographer. Have had it for years.)
Twice a day, the mighty tides swoop into the bowl created by the 'comma' of Cape Split, into the waters of Scotts Bay. As all that water moves around the end of Cape Split, a riptide is formed; one that runs at about 8 knots. 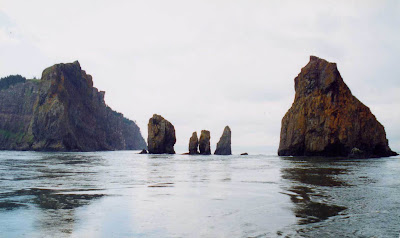 A view of the end of the Split from the Minas Channel side of the Bay. The tide is just starting to run, and though it looks sort of serene on the surface, it's anything but. This is a wild place to be; the Bay's floor can go from being just a few dozen feet deep to over 300 feet in just the time it takes to draw a breath, and that also contributes to the dancing water. 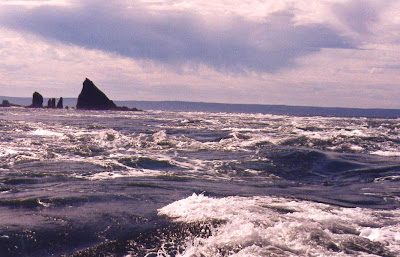 During the turning of the tide, the rips create whirlpools, eddies, 'dancing water', currents that are not safe for small vessels, and that can give even experienced mariners bad moments. (You should come through here in a dungeon of fog as well as a run of tide. Been there, done that, in a lobster boat a few years back. Whew.)
I thought it appropriate to mention the Split and the tidal tantrums today, as just a few days ago the Bay almost claimed a couple of victims. A lobster boat got into mechanical trouble not far from Cape Split, and started sinking. The captain and his two crew members were airlifted to safety by the Search and Rescue team from 14 Wing Greenwood, our local Air Force Base. The boat is now on the bottom of the Bay. Boats, however, can be replaced. Human lives cannot.
While I don't know the fishermen involved in this particular event, my longsuffering spouse is a retired lobsterman, and he knows the waters of the Bay and just how treacherous they can be. He also knows the captain of the vessel that got in trouble, but even if he didn't, there is a bond among fishermen as there is among many dangerous trades, from firefighters to miners to pilots. And the many coastal communities along the Fundy shore--both in New Brunswick and here in Nova Scotia--are deeply connected to the waters that surge past us daily. So we're all very grateful to the SAR crew, and to Glooscap and any other gods that might have been watching, that the voice of the moon--as some call the tidal roar that calls around Cape Split during the changing of the tide--didn't create a very different outcome.