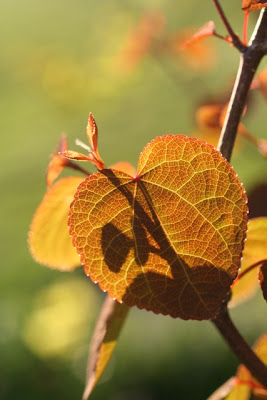 There's nothing like a computer disaster to throw one's carefully organized work schedule right out the window. And unlike those Gen Xers and Yers (Is that a word) whose dexterity with texting on phone keyboards is phenomenal, I'm not much of one for writing using only my thumbs. So I've fallen way behind with reading blogs, posting to my own, and so on. To say nothing of my own work. Happily, my period of being electronically unhorsed is over and tomorrow is a holiday, meaning I can do a marathon of catching up.
Being in electronic pergatory for a few days didn't deter me from poking around the gardens, stalking flowers and feathers and foliage with my cameras--when it wasn't too windy, or too foggy, or too late in the day. The other night, things just conspired together to work rather nicely, and I spent some time looking at leaves with sunlight filtering through, as with the katsura foliage above. 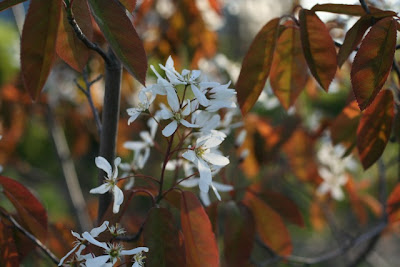 In probably all of the rest of Nova Scotia, the shadbush (Amelanchier) has finished flowering--mine, however, is just at the peak of its bloom. This is one of my favourite native species, and for those who like a large shrub/small tree with three strong seasons of interest, the amelanchier is an exquisite choice. Bronze foliage in spring, dainty white flowers that turn into tasty purple-blue fruit (if you get to them before the birds do), great fall colour--what's not to love? 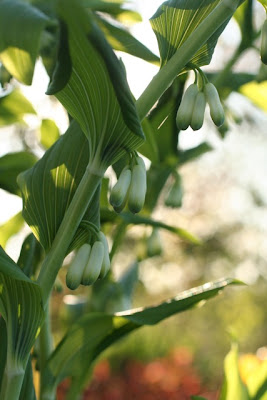 Another native that does my heart good, this one a perennial--Solomon's seal, Polygonatum. The hummingbirds love this perennial, which spreads slowly to form elegant colonies. At least, it spreads slowly in my garden--I would actually not complain if it picked up the pace a little! 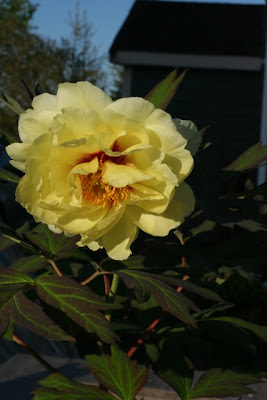 Many of you ooohed and ahhhed over my photo of the opening flower on my tree peony; they're such ephemeral beauties, as tonight, the petals are beginning to drop from my plant. This is supposed to be 'Kinkaku', which has flowers rather coppery coloured and similar to the nonstop begonia 'Fire'. This isn't Kinkaku; possibly it's High Noon? Any ideas? (It came mislabeled from the nursery, so it's a mystery to us. ) 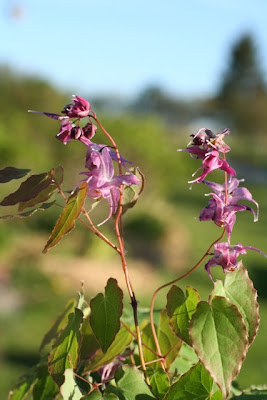 Proving that biggest flowers aren't necessarily the best, the charming blooms of my tiny epimedium 'Lilafee' have now opened. I hope this one spreads like gangbusters, because as I wrote in an earlier post, I'm crazy about epimediums, and 'Lilafee' is small-but-mightily beautiful. 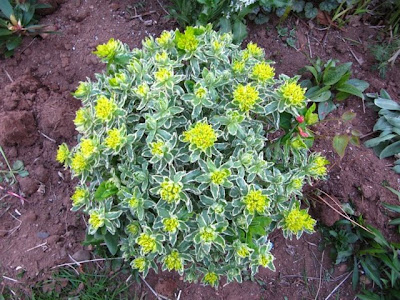 My cushion spurges are erupting into their full glory as well. Above is 'Lacey', one I've had for four or five years now. I love its cool bicolour foliage against the acid yellow flowers and bracts. 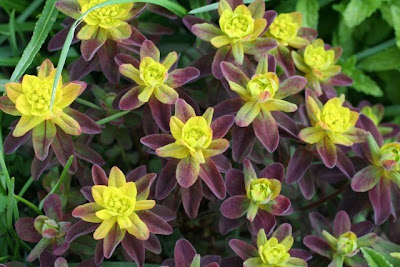 And this is 'Bonfire', and it's puzzling me somewhat. At both my mother's and at another friend's, this plant has a lot more golden-orange to its flowers than does mine, which is as you can see distinctly avid yellow against the purple lower foliage. Maybe it's a soil acidity thing; maybe mine is just so newly opened whereas the others have been open longer. I'm going to watch, because I'm curious that way. 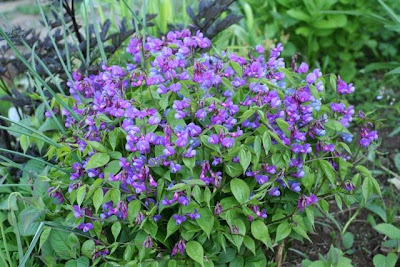 Five years ago, I bought this spring flowering perennial sweet pea from Lloyd Mapplebeck in Truro--I believe the correct name is Lathyrus vernus. It's not fragrant, it doesn't want to be divided (having that typical legume tap root) but hummingbirds zip to it and it makes a happy burst of purple-blue in my front garden. 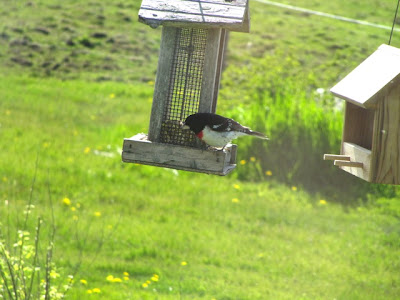 There are a lot of courting songbirds (and other birds) in our gardens these days, although we don't think we've seen this Rose breasted grosbeak's mate yet. He certainly does enjoy our feeders, though! 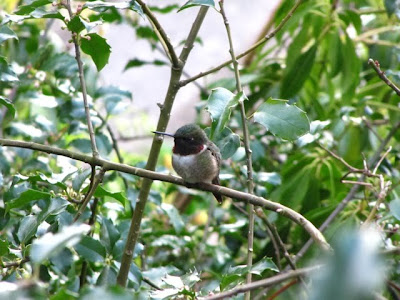 Last Sunday, the male hummingbirds arrived, and demanded we get our feeders up for them, STAT! We happily did that, and they've been feasting at the feeders as well as on spring blooms since then. We saw the first females on Thursday, so we can expect lots of aerial displays, acrobatics, squeaking and battles as the courting and family making goes into high gear.
Spring is such a perfect season. Even when it's windy, or foggy. I hope all of you are enjoying spring as much as I am. Most days, that is.