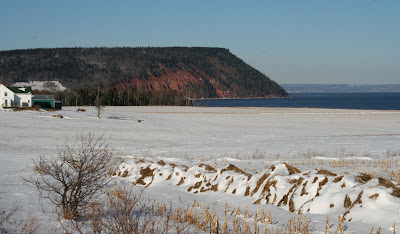 In my Wordless Wednesday post, I put up a photo which many of you thought was quite cool, and more than a few of you wondered about. Since it WAS Wordless Wednesday, I didn't offer any explanation other than the title, so I thought I'd explain a bit in this complementary post, just in time for Skywatch Friday.

I live on the west coast of Nova Scotia, overlooking the upper Bay of Fundy, home of the world's highest tides. A couple of years ago I did a post explaining something about the geography of our area. One of the characteristics of our area is numerous tidal rivers, including the Habitant River, which flows past the village of Canning and out to the Minas Basin. Because the river IS tidal, the waters rise and fall twice daily. In the cold of winter, ice forms, of course, and that gets tossed up into chunks like giants' ice cubes, along the muddy banks of the river. The photo from Wordless Wednesday was shot early one morning when there was hoarfrost on the trees and there'd been enough very cold days to make ice, which had been shuffled around several times by tides. Mist rising off the mud, ice and water just added to the mood.
I mentioned the aboiteaux, which is an Acadian word meaning sluiceway. The Acadians who settled here in the 17th century reclaimed hundreds of acres of fertile lands along the rivers and inland from the Minas Basin by building long dykes made of earth and rock, which held back the tidal waters and made the fertile acres available for cropping. This worked with the Basin, but what about the rivers? They had to flow, but the Acadians didn't want the salt water backing up into the croplands above the dykes. Their solution was to create one-way sluiceways, les aboiteaux, built of wood and with a flap at one end to allow the river waters to flow towards the Basin, but not to allow the seawater to flood back over the croplands. 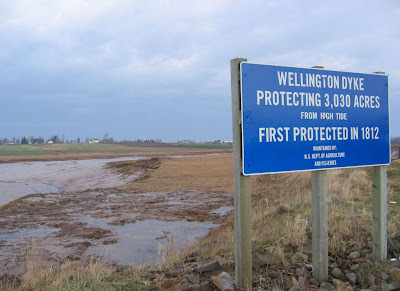 The Wellington Dyke, in Lower Canard, both holds back the sea waters and has a modern aboiteaux which keeps the tidal Canard River from flooding the agricultural lands behind the dyke walls. This dyke and sluiceway, unlike the one at Habitant, would have been built by the British settlers who located in this area after Le Grand Dérangement, the Expulsion of the Acadians, in 1755. This photo shows the tidal part of the river at low tide... 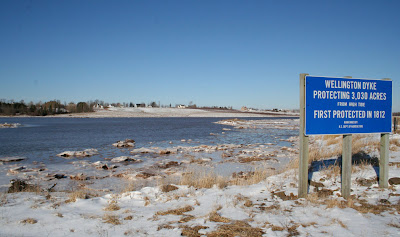 And this is it at high water. Quite a different situation.
This is all a very timely post for several reasons. During the Expulsion, the Acadians were removed from their homelands, in what is now Nova Scotia, and many of them went south...both to Louisiana, home of what are now referred to as the Cajuns...and some went on to Haiti.
In standing on the dyke walls the other day, I thought about the tenacity of those first Acadians 250 years ago, and how their spirit of determination held them together as a people even in the face of being displaced from their homes, their farms and livestock, from all but their lives. They went elsewhere, and built new lives, and in time some came back here and reestablished, and are proudly here to this day.
Determination. Undaunted spirit and will to survive. The waters didn't defeat them, and neither did the politics.
post writen by jodi (bloomingwriter)