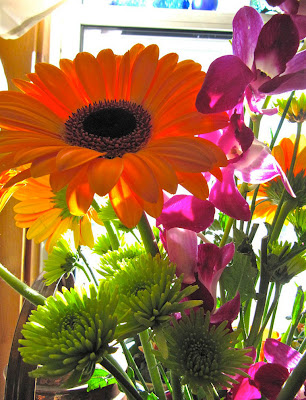 I'm a wholehearted believer in zen, karma, synchronicity, and other such inexplicable wonders. When I posted my exquisite green flower yesterday, I had only two things in mind; the need for seeing something green, and one of my favourite short stories ever, Ray Bradbury's "The Green Morning," from The Martian Chronicles.
I read that story for the first time in grade 8, and thrilled to the thought of trees growing even more quickly than beanpoles (or goutweed). Even though the logical part of my mind knew that Mars wasn't hospitable to life as we knew it and that we weren't gonna get there by 2001, despite the best efforts of Stanley Kubrick, Bradbury, Clarke, and NASA...I loved the concept.
For Valentine's Day, I did not want the traditional roses. Hubby didn't have to get me anything, actually, but what he did was tell me to go pick out some flowers I wanted. I didn't want red, or red and white, or pink. I wanted rich, brilliant, soul-drenching colours. Hot magenta orchids. Brilliant, sizzling gerbera daisies. And deliciously green chrysanthemums. 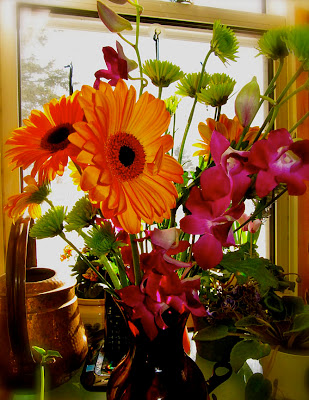 Not exactly your traditional Valentine colours, are they? When it comes to chrysanthemums, which are meant to mean optimism and joy, I actually only like the green ones. It's no secret that I absolutely love green flowers, so it figures that green mums would suit me perfectly.
It happens that Valentine's Day was also Chinese New Year, kicking off the Year of the Tiger. Chrysanthemums are often used in celebrations, although usually in red and yellow rather than green. But this was all accidental synchronicity, remember. Hopefully my Chinese friends will excuse me celebrating with green chrysanthemums rather than other colours.
The most striking little tidbit of synchronicity, however, is that green chrysanthemums are part of the bouquet given to Vancouver Olympic medal winners. The bouquets include green spider mums, green hypericum berries, all wrapped in a sheath of green ferns and grasses.
I've never been a huge fan of the Olympics, and I don't like the hype and politics that goes along with. But watching the athletes, and the enthusiasms of the crowds, and the camaraderie even in competition, I found myself feeling optimistic. Proud of my country, and of the youth who have worked so hard to come to this point. I feel cheery. This, despite sordid politics in my own province, tiresomely cranky weather everywhere, and assorted other irksome travails.
We're over halfway through February. March is next, which will herald spring for some. We will make it.
I wish you all green chrysanthemums. Or green mornings. Or other colour-drenched ways to feed your spirit as we slouch towards spring.