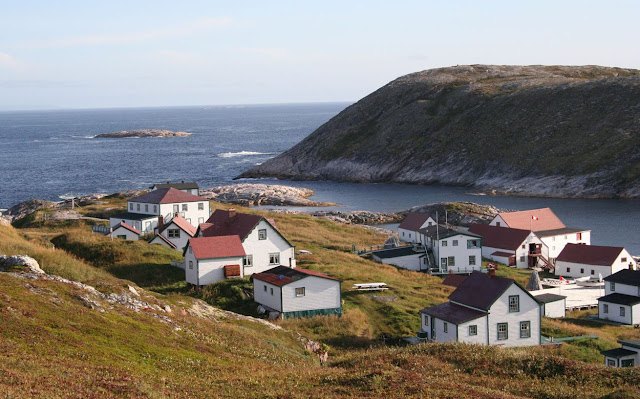 It's no secret that I'm a little bit in love with the sea. I was born near it, raised my whole life beside it (except for one eighteen month stint in Ontario as a teenager). I live beside it now. I watch it, sail on it in lobster boats and coast guard vessels, occasionally swim in it. There is sea in my blood, though my father was a jet pilot.
Two years ago, in the summer of 2007, I had the chance to go with fourteen other plant-crazy botanists and horticulturists to northwestern Newfoundland and south-eastern Labrador, to Battle Harbour in the  Battle Island. A dear friend who is a senior horticulturist and amazing plantsman led an annual trip plant-hunting for interesting variants of hardy native plants. Finally, things worked out so I could go on this epic adventure. 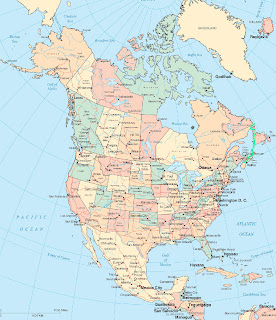 The photos I posted on Wordless Wednesday were taken in Labrador on that trip. We travelled well over 3000 kilometres (about 2200 miles) over the span of nine days. To give you some idea of how far we were from home, and how big Newfoundland and Labrador are in comparison to other provincecs and states, just click on the map above. I've marked our journey from the Valley to Battle Harbour in green. Newfoundland could eat Nova Scotia and PEI for lunch. Nfld and Labrador are a very big province, bigger than most states. 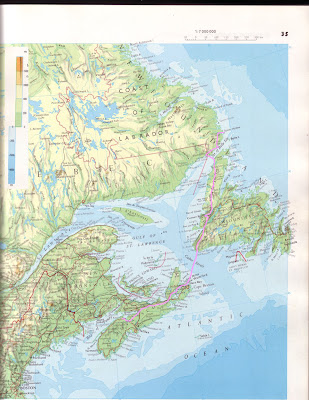 Here's a more relative explanation of the trip we took. To get to the wilds of Labrador from my home in the Valley, we had to leave Canning, then go to Falmouth to pick up a friend; drive to North Sydney and take a ferry six hours across the Cabot Straight to Porte aux Basques. Then we made our way gradually up through Gros Morne National Park, the most stunningly rugged and gorgeous wild space I've yet encountered. At the top of the Northern Peninsula, we took another ferry across the Strait of Belle Isle to Blanc Sablon Quebec, from which you could sneeze into Labrador.
The next leg upon disembarking from MV Apollo was to make all possible haste to Red Bay, where we said goodbye to pavement and drove over gravel roads for 86 kilometres. Along the way, three Highways plow sheds. That's it, folks, til we hit a small community called Mary's Harbour, from which we were to take our last ferry, out to Battle Island. 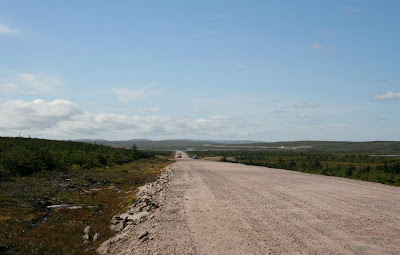 Have I mentioned that there was nothing there but rock, tundra, scrub trees, water, and sky? It was starkly beautiful. Emphasis on the 'stark.' 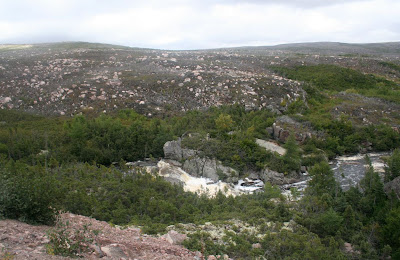 I don't seem to have a photo of the boat we took from Mary's Harbour to Battle Harbour, but she was a lovely refitted fishing vessel, and I knew who had built her (she'd come from Nova Scotia). The captain and I shot the breeze about fibreglass boatbuilders, 2:1 reduction gears, the benefits of Cummings over Detroits over John Deere diesels, and other worthy talks. It comes in handy to be hitched to a (now retired) lobster fisherman. I talk boat fairly well, so long as it's a Cape Island type fishing vessel. 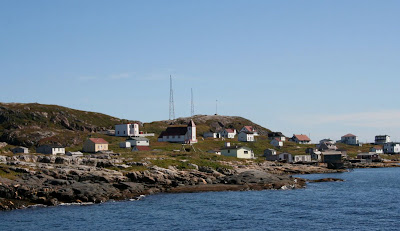 Finally, (I think the trip was about 65 minutes), we navigated in among the shoals protecting Battle Harbour from the elements. This remote national historic site was once a crucially important fishing station, with its own Marconi wireless station. 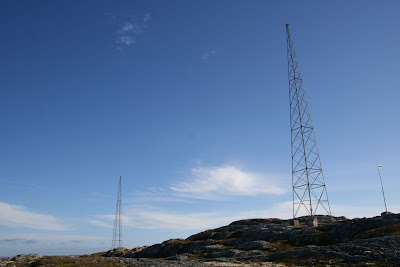 Once we were squared away in the residences where we'd be sleeping, we were off up the stony cliffs behind the settlement to look at plants, and collect seedlings, and photograph more plants. And gaze at the scenery and the peacefulness around us.
One of Battle Harbour's claims to fame is that in 1909, Robert Peary arrived to cable back to New York that he'd successfully been to the North Pole. Imagine, a press conference from this fishing station off the coast of Labrador, hanging off the coast of Canada, talking to scientists in New York! It turned out Peary hadn't been the first to reach the Pole, but it was still an accomplishment nevertheless. 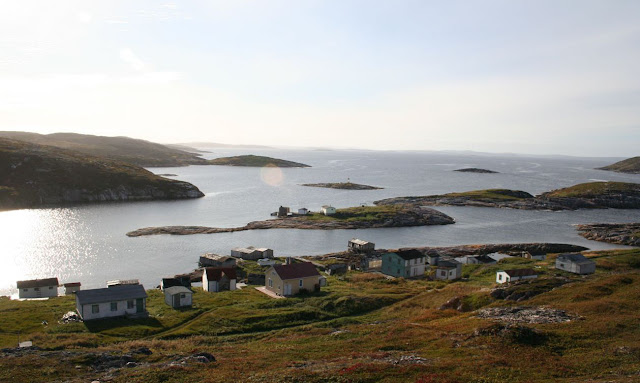 We spent two nights here, and the second day had to delay our leaving because we had a bit of a storm come through. That worked out fine as a day to sort of rest, tell stories, sleep, eat awesome meals at the cookhouse, drink a little wine, tell more stories, and sleep some more. Of course, we had more weather when we got back to mainland Labrador, as you saw in Wednesday's photos.
It's hard for anyone who has never been to someplace remote to grasp both the remoteness and the beauty. I could go back there again for a few days, armed with just my computer, camera and my eyes. We all spent a great deal of time looking, from peering at plant seedheads to examining lichens to gazing at the countless shades of blue in both sky and water. Some great friendships were made on that trip, and others strengthened, and we all learned a great deal.
If you get the chance and are at all adventurous...GO. First, to any part of Newfoundland island, then particularly to Gros Morne and the Tablelands, then up to the Labrador, even just to do the scenic loop from Forteau to Red Bay. But if you're really adventurous, off to Battle Harbour you must go. You'll be treated magnificently by the staff of the site, left to your own resources, and...it's a good place to think.
By the time I finish this post, I'm ready to pack up and move BACK to Newfoundland, where I was born (on the eastern side at St. John's.) Funny how my three favourite places to live would be St. John's, Montreal, and where I am right now, on a windy hill overlooking the Bay of Fundy.
Guess I'm where I'm meant to be. Are you? That's my post for this Skywatch Friday.