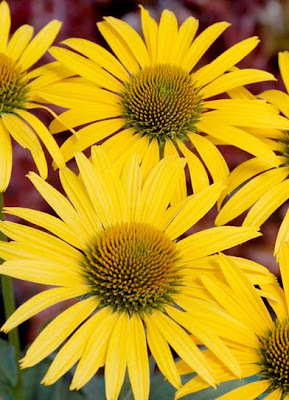 So after work yesterday I went on a run to Lavender Hill Nursery in Jordan Falls, not far from Shelburne. They don't have a website but they are on Lake John Road in Jordan Falls and they are well worth a trip. I went with a friend who was after annuals for her container plantings, but what did my wondering eyes spy but three coveted coneflowers! Above, feast your eyes on the brilliance that is Echinacea 'Mac n Cheese'. Kraft Dinner never looked this good! 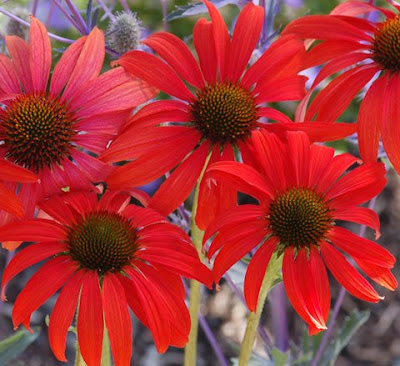 I'm really, really keen to see how this one performs and if it's as awesome as its photo. What goes well with Mac n Cheese? Why, 'Tomato Soup', of course.
(Especially if made with heritage tomatoes, plants of which I ALSO got at Lavender Hill. Yeah, I'm going to try again to get a ripe tomato before October.) 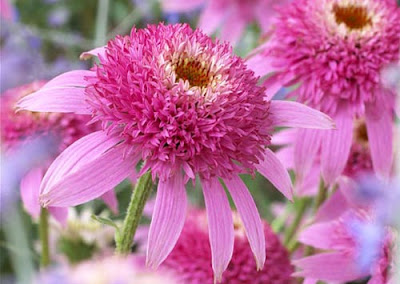 To go with my friend 'Coconut Lime', which I got last year and which is doing just fine this year, I'm adding the joyfulness that is 'Pink Double Delight'. I'm curious to see if this is as vigourous. Something tell me it will be great; the nursery brought these plants in from Terra Nova Nurseries in Oregon, which is an awesome nursery for new releases. I can't wait to see how these three perform.
And now for something completely different.
I gave a talk on Monday at the Annapolis Valley Regional Library office, and one of the books I said I loved was Douglas Arthur Brown's 'Quintet'. To my great delight, I learned that he had been awarded the Thomas Raddall award for fiction at the Atlantic Book Awards just in the past week or so. 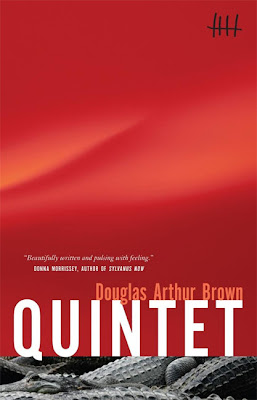 I love this book, loved it when I read and reviewed it, love Douglas Arthur Brown...and think everyone should read it. I blithered on to that effect on my Facebook profile this morning and someone asked about posting my review from last year. This seems like the easiest place to do so. So here's my review of Quintet, published in the Halifax Herald a year ago February.

Ever since I begain reviewing books some years ago, I’ve worked to maintain a certain demeanour in looking at works of Canadian fiction or nature/gardening non-fiction. It’s hard to be objective in reviewing, because reading is such an intensely personal thing, but I work hard to present a fair and balanced look at anything I review. Normally, that’s the message I hope readers receive. Not too effusive, not too cranky.

With Douglas Arthur Brown’s new novel, Quintet, I have one firm, probably effusive but heartfelt message for readers. Go buy this book and read it. Or borrow it from a friend. Take it out of the library. Libraries, if you haven’t ordered this book yet, you’d better. Because Brown has penned a brilliant, moving and entertaining work that is as good as any novel or short story collection I’ve read in the past couple of years.

Quintet is the story of a family as told by identical triplets Rory, Adrian and Cameron. Following the deaths of their parents, the brothers decide to keep a journal, which each will work on for a period of time before sending it on to one of the two others. The three brothers may be identical in looks, but not in how they live their lives, and they’ve grown apart over the years. The novel is told in three very distinct voices, and traces how their lives have found such divergent paths. A fourth brother, Talbot—older than them by a decade, referred to them as “The Big B” and alienated from all of them—is a haunting character who casts a light on each of the triplets by his own isolated, shadowy self.

Although he doesn’t write in the same style as either Alistair MacLeod or Ami McKay, I’ve had the same visceral, emotional, joyous response to Quintet that I have to MacLeod’s and McKay’s writings. Barely finished the novel, I didn’t want it to end, but was ready to start reading it again. When an author sculpts a story that is compelling, using fresh imagery in phrases and passages that are humourous, harsh and poetic, how can I resist? The brothers, reunited for the first time in years, “had to warm up to each other again, cautiously circling like flies above a picnic table.” Onlookers at a bar, seeing the three brothers, are “dangling their nosiness like fishhooks.”

Here is Adrian, feeling out of sync from others around him, “like a wasp in winter, awakened by the teasing promise of a sunny day, called forth to greet the spring while the chill winds of February temporarily part their drapes of bitter cold. The wasp bastes its wings, and at the moment of virgin flight, the sun sets and February snickers as the eager and premature wasp perishes…”

Brown told me that he received a rejection letter from an editor about an earlier draft of the novel, where the reader told him that “the idea of three brothers sharing a journal and committing to it is far-fetched.” The funny thing is, Douglas and two of his brothers created a journal which they filled and continue to exchange between themselves on a regular basis. So the germ of Quintet has a seed in reality, but under Brown’s tender ministrations it takes on a gorgeous life of its own.

Novels with multiple narrators can work very well, or they can be cluttered. Quintet works wonderfully because while the three brothers have similarities and connections—they would finish each others’ sentences and always wanted to be alike in their youth—each has his own very distinctive personality and voice. Cameron is the hyper carpenter who sings in a choir and who initiates the journal project; Rory, the successful artist who marries a doctor fifteen years his senior; Adrian, the driven chef who finds love and much more in a country not his own.

Brown says his writing has been shaped by a wealth of other authors, ranging from Hans Christian Anderson and Ski to Mavis Gallant and Katherine Mansfield. While he loves Canadian writers—he read more than 2000 short stories and novel excerpts by Canadian writers during his tenure as publisher of Pottersfield Portfolio—he believes that “a writer must reach beyond the Canadian border when reading.” And with writing. Although Nova Scotia figures throughout in this novel, Quintet is not a ‘regional’ novel but a richly cosmopolitan one, hurtling us from Copenhagen to Toronto to Halifax and Cape Breton. In this the novel traces a trajectory which Brown himself has taken, having spent a decade each in Toronto and Denmark before making his way back to his native province. Sometimes, as he observes, an area such as Cape Breton can become a character in a novel, which can distract from the storytelling. His use of landscape is far more subtle, his characters so finely honed that a reader can become attached to secondary characters as easily as to the three brothers.

Douglas Arthur Brown says he wrote many short stories before attempting a novel, and finds them more difficult to write than the longer story, but that “I couldn’t have progressed to novel writing without the short stories.” His observation is that there is no market in Canada for short stories at present, and he plans to concentrate on novels for the future. He’s currently finishing a young adult novel, and once that is completed, has plans to start his next novel in January of 2009, also an exploration of family dynamics.

I hope by that time we’ll also be able to call him ‘author of the bestselling, award winning novel Quintet.” Because this novel is a winner at all levels.

And I was right. Well done, Douglas.
Back to our regularly scheduled garden-speak next post, I promise.