Aliens in the gardens 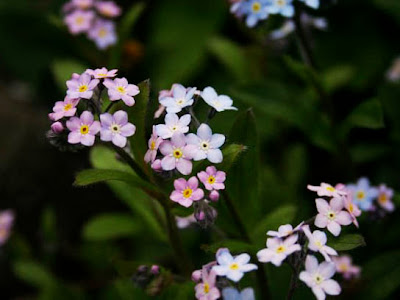 No, this isn't a diatribe against non-native plants. I was just out prowling around the garden last night and was struck by the marvels of plants in our gardens, especially when they're waking up, but also just...because they do what they do. Take the forget-me-nots above. They're mostly all blue...except when they're pink. Or white. 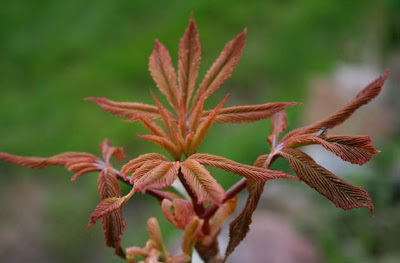 A year or so back a friend gave me an Ohio Buckeye sapling, and it's leafing out, a few days behind its relatives the horse chestnut and red buckeye. I am totally enamoured with its new leaves which are as pretty as a Japanese maple. 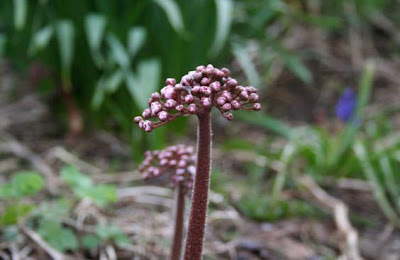 This is one of the stranger denizens of my garden, and I may need my LongSuffering Spouse's Stihl chainsaw to divide it up. This is Darmera, sometimes called umbrella plant; it flowers first with these stalks of tiny flowers, and then the huge leaves arrive later. The rhizomes are huge, fleshy and would probably NEED the chainsaw. I've never tried to divide it, but instead let it grow where it grows, and it handles the wet there nicely and just behaves itself. 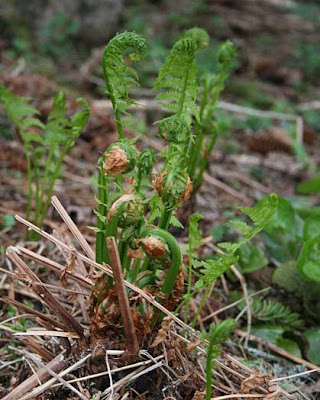 All ferns (as far as I know) start out life with a fiddlehead, but these are the Ostrich ferns (Matteucia struthiopteris) which produce the delectable, delicious and divine edible fiddleheads. I grow them just because I love the plants, and buy my fiddleheads from a farm market in town. And eat them with lemon and butter and great joy. 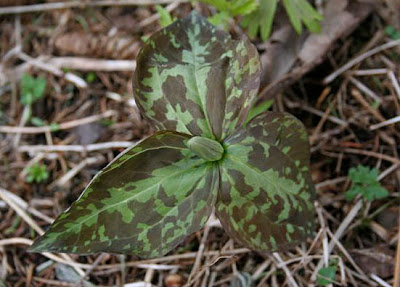 This mottle beauty is my yellow trillium, Trillium luteum, not yet flowering but with such handsome foliage. 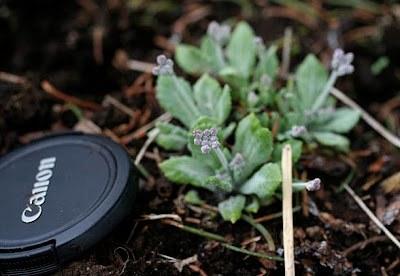 Okay, this little charmer seduced me last year and I had to buy it. This is the delightfully named Birdseye primula, P. frondosa. You can see how big the plant is; that's the lens off my digital SLR main lens. 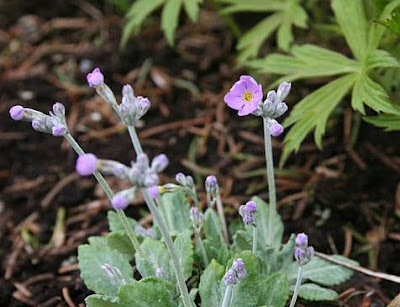 And here's the plant a few day s later, with its tiny flowers. I'm lucky that A. This plant survived and B. that it survived in a place where I noticed it. Because I had totally forgotten that I bought and planted it. Oooops. Its label was still there, happily, so it must have gone dormant last year or been caught up in the wave of wild wood anemones, which I'm beating back this year. Sort of. 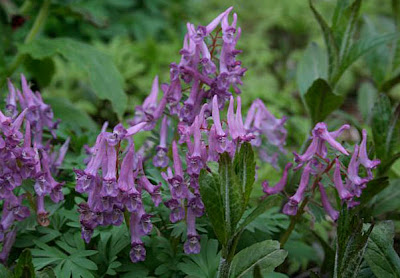 I'm liking this corydalis more and more, and yes, it IS fragrant, so we're pretty sure it's Blackberry Wine. With a little turtlehead sprouting in front of it, which I'll move tomorrow, weather permitting. The flowers of all the corydalis are charmers, but this one especially amuses me. 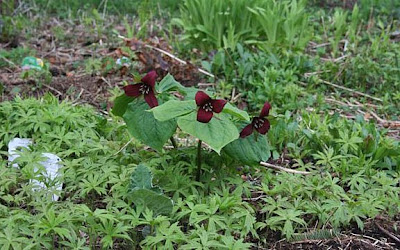 Sylvia likes that we go trillium counting, which we haven't done yet. Maybe this weekend, though the main accomplishment so far has been getting two more beds cleaned out AND going to see the new Star Trek movie. (which was totally made of win and you should go see it too!) I have the hosta Captain Kirk in this bed, but it's not up much yet. Meanwhile, these trilliums are in the same bed, along with a dozen or so of their siblings. They're native here, and we're glad we rescued them from the clearcut everytime we see them multiply a bit more. Just ignore the burdock growing beside them. He's leaving tomorrow. 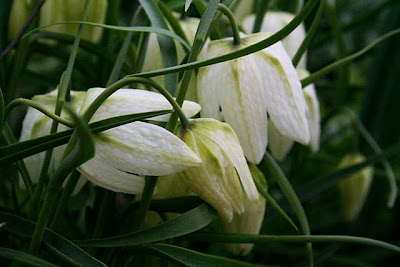 While I love the wine-coloured checkered fritillaries, I find these white ones wonderfully soothing even though their checks are very hard to see. 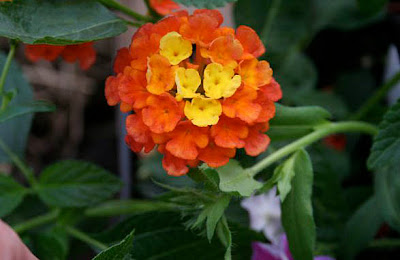 Moving into my first love song to annuals now, aliens all; I was delighted to find a variety of Lantanas already this year, and of course I had to get all of them. This is Landmark Citrus, and I can see it's going to be a favourite. Bright coloured flowers are my usual passion... 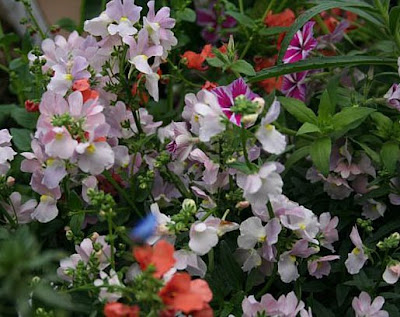 Although occasionally I kick over the traces and opt for something a little more pastel, like these Opal Innocence Nemesia. This particular form is also fragrant, and is just a lovely plant. 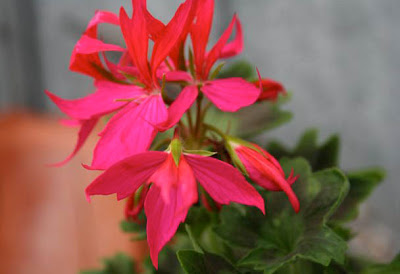 A lot less pastel, but equally charming, this is a fancy geranium called Graffiti Violet. The digital camera doesn't do it justice, because it doesn't show just HOW hot pink and HOW red-tipped the flowers really all. They're exotic like a bird of paradise, and I may have to go get some more. 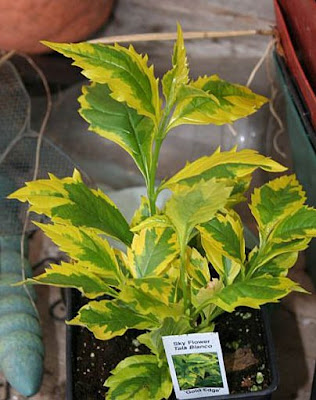 While I love the brilliant flowers of annuals, I also like to include foliage in my container plantings. This is a new to me plant this year, called Sky Flower or Tala Blanco 'Gold Edge'. I know nothing more about it than it's an awesome colour. We'll see how it performs in my containers soon. 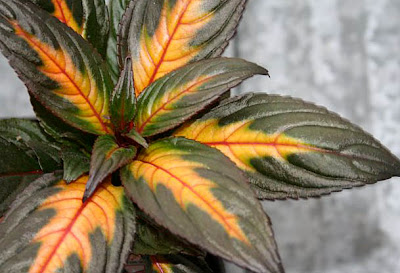 It's well known that I'm not a particular fan of impatiens. Except this one I love though I probably won't let it flower. The leaves are simply glorious sort of like a leucathoe, which I don't grow because they hate the wind.
It's a well known fact that I'm also not a fan of petunias, though I love them in other people's gardens. But I think that may be about to change. The plant gods are not without a sense of humour. You'll have to wait til next post, but suffice it to say...Picasso would be pleased. And so will Anna Flowergardengirl.