The galloping spring garden: Letters Across the Pond 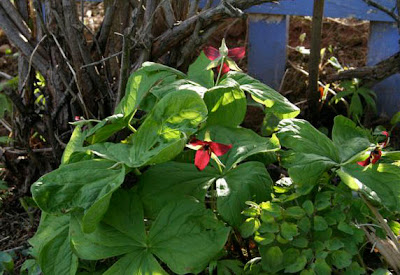 We had an unusually warm spell of weather for a few days this week, and the gardens went from trotting along to a full exuberant gallop. Everything, from the bulbs to the weeds, shot up in growth and maturity. Not everything is awake yet; a few later things like various asclepias are still slumbering, and a couple of later-blooming gentians that are in shade are just starting to yawn and stretch. Likewise with the later-blooming perennial grasses; they're stirring and starting, but for the most part the garden is bustling. 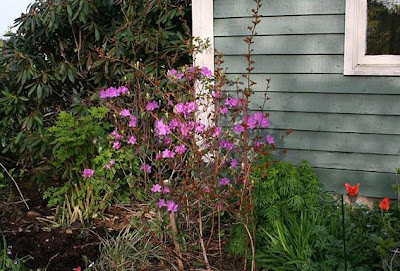 While others around the continent are having their rhododendrons and azaleas wind down (or are long-finished), my first blooming one is 'PJM', a hardy rhodo with small, scented leaves. Like you, I'm a great believer in shrubs and we have a good many of them, incorporated around the garden. 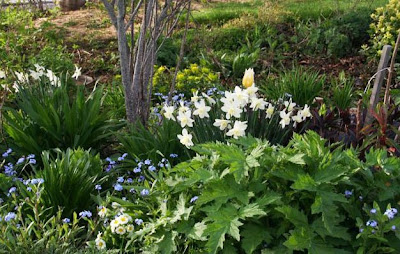 As you can see, there are quite a few things in bloom now. Of course, we have scads of Myosotis, or forget-me-nots; they're the official flower of the Alzheimers Society and my father died of that horrid disease almost four years ago. They look lovely among the primulas and daffodils that are still doing nicely. 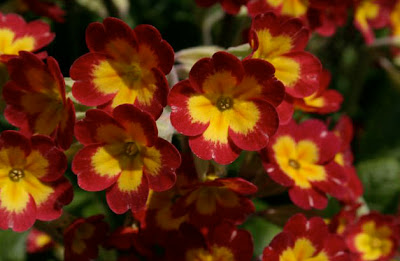 This is an interesting primula I got the other day from Lloyd Mapplebeck, a nursery owner and horticulture professor in Truro, where I went to Agriculture College years ago. Lloyd always has a huge variety of interesting perennials, and more often than not there's a story behind them. This particular primula came to him through another plant enthusiast, and if I have my stories straight, it originated in an elderly woman's garden, growing alongside the common cowslip. I don't know that it has a name, but it's certainly lovely. 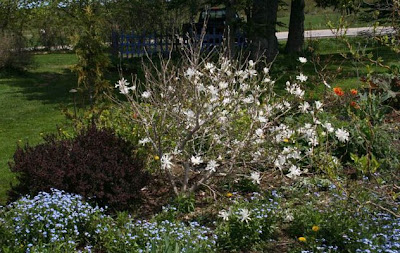 I really do let the forget me nots seed and flower where-they-will. Here they make a nice sea of lacey blue near a Concorde barberry and my Stellata magnolia. And yes, there are a few dandelions in the mix, too. I haven't gotten them gentled down, but I justify them as being good for bees. 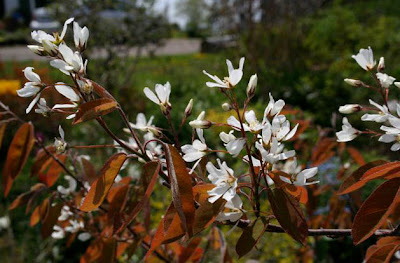 One of my favourite natives is the amelanchier, variously called shadbush, serviceberry, chuckly pear, Indian pear, chuckleberry...I just call it gorgeous. It's one of the first showy flowers of the native woods, along with pin cherries, and its fabulous new foliage is always this glorious bronze colour. Mine is about 10 days to two weeks behind those in much of the province, but that's the mitigating coolness of the Minas basin at work. 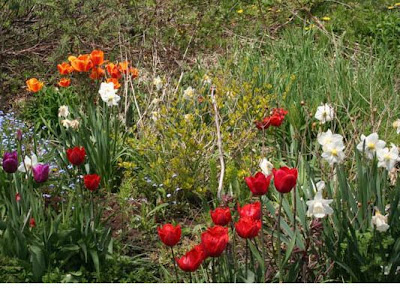 I didn't plant a lot of new tulips last year because I was heading into surgery, but these fringed tulips all came back quite nicely. I like the counterbalance of the blood red tulips with the pure white daffodils. In the background is Orange Emperor tulip, I think. 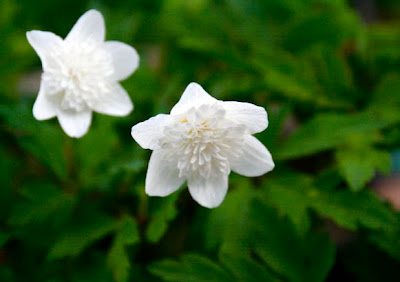 Another plant from Lloyd, this one 'Vestal' anemone. What a unique and lovely plant this is, with its gorgeous double centre, so different from most anemones. Lloyd had a story about this plant and how he came to have it, but I didn't write it down, and I want to get it right. So I'll email him for the details again. 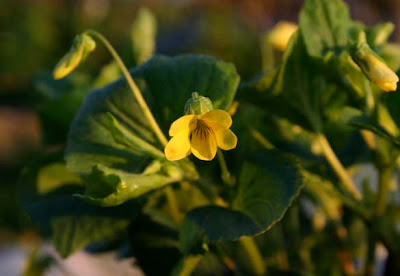 These yellow violets are native to many places, including parts of Nova Scotia up around Truro, but I have never seen them in the woods here. So when Lloyd told me he had collected seed and grown these, of course i had to have them. They'll do wonderfully in my woodland garden under the spruce trees. 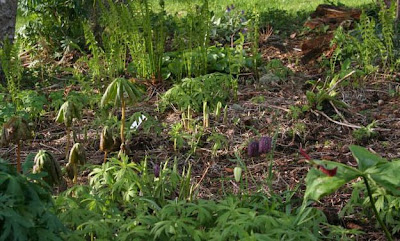 When we first moved here, I began planting a garden under the big white spruce on the south-east side of the house; this garden is home to a host of natives as well as other plants. Another anemone (this one the enthusiastic A. nemerosa or wood anemone) is taking up a good deal of space in that garden, but there are also some lovely primula, the different trillium, ostrich ferns, astilbe, shooting stars, hosta, and the charmingly bizarre Mayapple, which look so odd when emerging from the ground. 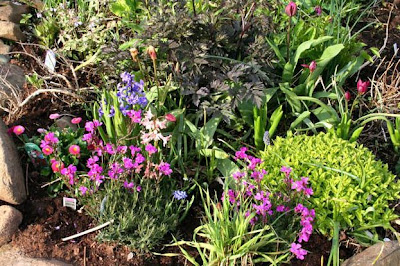 Around the front of the house is a small triangular bed I call my bright garden. It catches a lot of sun in the morning, and is right by the front door, so I put in lots of colour. Currently there are still bulbs blooming, but also springflowering perennials such as bellis and Arabis. Then there are the black- and gold-foliaged plants, but they're a story for another day. 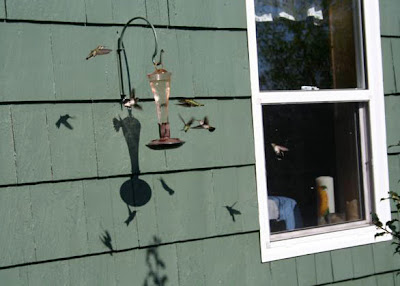 Finally, a treat for you; the hummingbirds arrived around May 11 with the scout-males, who bawled my hubby out til he found the feeders and got them filled and out. Now both sexes are here in full numbers, and we'll be filling feeders once or twice a day for most of the summer. We get a LOT of hummers because we do feed faithfully, both nectar and with plants they love. The feeders are in a sheltered  location so that's where the congregations appear and argue, squeak, chitter and whirl. They're quite fearless of me, who I guess they see as their bringer of foods. The other day, however, one got caught in the barn and was frantically trying to get out through the window, to no avail. I caught him and held him in my hands for a few seconds til I could get him outdoors and free. It was like holding a breath of living wind, his tiny heart beating so fast, yet he was quiescent in my hands til I opened them and set him loose in the wide world again. He zoomed to the birch tree for a bit and then joined the others in feasting. And my heart was happy.
There's much more going on, but that's enough for today's epistle! I hope you're enjoying the warmth of a late spring garden and getting lots of work done. I'm falling behind here, but whatever gets done gets done. The rest, well, I'll hide the sins with mulch, no doubt!
cheers, jodi