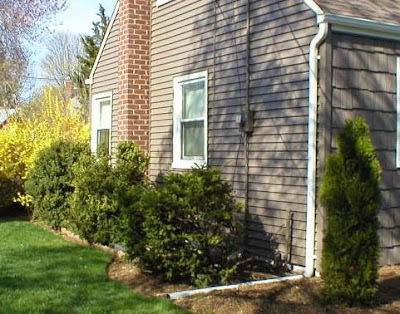 There are actually very few things in this world that I dislike strongly enough to say I 'hate'. Canned green peas. Goutweed. Bad bubblegum music and the bimbettes that produce it. Sensationalist 'journalism'. Malware. Most of the time, if there's something that displeases, irks or upsets me, I just dislike it and adopt a 'laissez-faire' attitude towards it. I don't like greedy bankers, but I don't have to deal with any directly. I don't like fashionistas, but they just make me chuckle. And so on.

So it is with most plants that I don't like. As noted in the earlier post, I probably like them just fine in other people's gardens. Most of the time I dislike a plant because it's been overused and overused in unimaginative ways. Anyone who has seen Anna's petunia arrangements knows she could make anyone love any plant because she creates delightful arrangements that are interesting and fresh.

There are a few shrubs and trees that I don't particularly like because they have been overused by lazy, unimaginative "landscapers" who are the equivalent of fast-food yard-designers. Slap in two Norway maples, five foundation evergreens, three clumps of 'Stella D'oro' daylilies, a spirea and a potentilla or two, and voila--instant landscaping. Uh huh. You want fries with that? 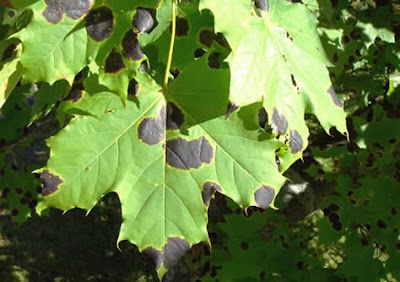 It's generally against my nature to cut down a tree or shrub if it's healthy, even if I'm not crazy about it. Hence the line of four Norway maples (Acer platanoides) out by the roadside in front of our house. I didn't plant them; they've been there, I'm guessing, for about 20 years. Every year they invariably get tarspot fungus in them, they have boring fall colour, and they're not native--but they're ubiquitous. Go to Halifax and have a drive around if you don't believe me. Oh, sure, some of them may be the red or bicolour variety, but they're everywhere. My way of counteracting the Norways is to plant native red and sugar maples around our property. 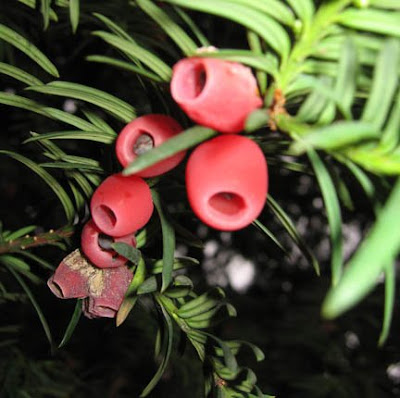 When we first moved here, there were a lot of boring foundation evergreens around here, ranging from a line of globe cedars along one side of the yard to a selection of yews and junipers along one face of the house to assorted other uninspired evergreens slapped in here and there. I got rid of the globe cedars fairly promptly, succeeded in talking my longsuffering spouse into removing the yews and junipers after a few years. A goodsized yew near what is now my office came down fairly promptly too. Yews are perfectly fine plants in their own right. But when I was a teenager, I read an article about a horse being poisoned and dying from eating yew twigs and berries, and it's stuck with me forever. Yews are highly toxic to equines, and while my horse is unlikely to ever get out of the pasture and come around the house to eat the yew (he'd be more apt to go across to my neighbours with our idiotdonkey and fraternize with HIS donkey), I refuse to take chances. Even the gorgeous green-and-gold yew which I think very handsome? Not in my yard. Not worth the risk. 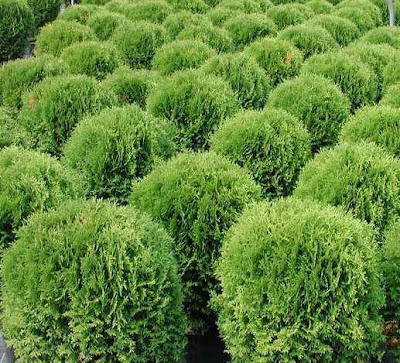 If ever there was a yard and garden cliche, this has to be it. Globe cedars, or more properly arborvitae. Blech. Now, because I'm nothing if not contrarian, I will tell you that there is a goodsized Emerald cedar outside one door of the house and I have left it there for years because we used to decorate it at Christmas with lights. But its days are numbered this spring. 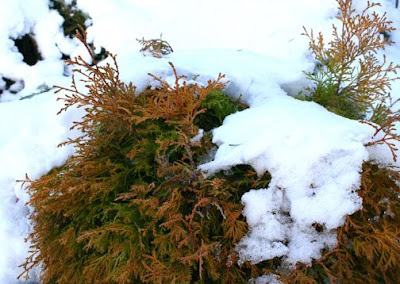 Out in the evergreen garden in the back of our property, I have three other arborvitaes: 'Sunkist', which is a beautiful gold in summer, and 'Sherwood Frost', which was given to me and which I sort of like for its white-tipped branches, and 'Rheingold', (covered in snow, above) which provides me with a rainbow of colour all year long. So far, all of them have come through our winter with no problems, but if they start getting winterburn...they can prepare to face their compost-Maker. 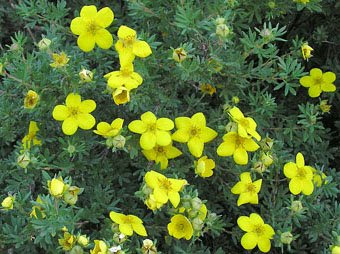 I like most flowering shrubs, especially if they have a pleasing shape and interesting leaves even if they're not in flower. Outside my office there's a fairly large, sprawling, buttercup yellow potentilla, and its days are numbered this spring. Shrubby potentillas do NOT do it for me at all, yet I love the perennial types. Potentillas tend to be hugely overused, but they do flower for a long time. And I did buy a pink-flowered one a couple of years ago and plant it in the memory garden dedicated to my late former mother-in-law, because pink of course is the Breast Cancer colour, and the plants do attract butterflies, which Marilyn loved. 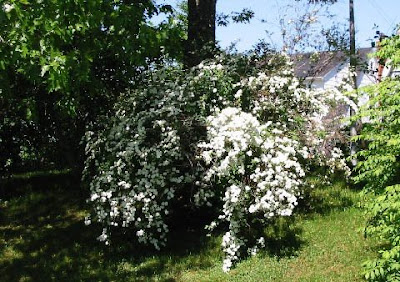 Last on my list of not-beloved woodies are certain spireas, generally the type with white flowers, non-descript growth habits and little to distinguish them once their week-or-two flower period is over. There are a couple of bridal-veil type spireas out front (under the Norway maples, surprise surprise) that are just so uninspiring. Part of the reason I leave them AND the maples where they are is because that's also where the goutweed was planted however many years ago, and I THINK that they, and the Rosa multiflora, and the other aggressive-type perennials I threw in there are finally getting the upper hand on the goutweed. I don't dare remove any of the plants for fear the goutweed will take over the universe. Spireas also grow wild here and they and their domestic relatives are good pollinator plants, so for that they also get a big star.

Despite not liking these bland spireas, I have a whole host of OTHER spireas that I really, really love, for either their foliage colour, fall colour, or cool leaf shapes. These include:
'Tor': Awesome fall colour to the foliage.
'Lemon Princess': brilliant lemony-yellow foliage.
'Crispa': Interesting textured, highly serrated leaves and hot-pink flowers.
'Flaming Mound' and 'Gold Mound'; both have brilliant coloured foliage, in new growth and fall colour. All of them are interplanted with other shrubs and perennials but would drive me crazy if they were lined up like little soliders.

Given the huge variety of plants available to gardeners, whatever their growing conditions and hardiness zones, I figure this is a very small list of things I don't like. It would be awesome if some nurseries and landscapers would stop overusing them in unimaginative ways, but in most cases, these plants tend to be inexpensive at nurseries (and ashphalt 'garden centres' run by bigboxes) and for some so-called landscapers, it's all about cheap, same as with contractors who build houses out of chipboard, 2 x 4s and plastic siding. That's a rant for another day, isn't it?