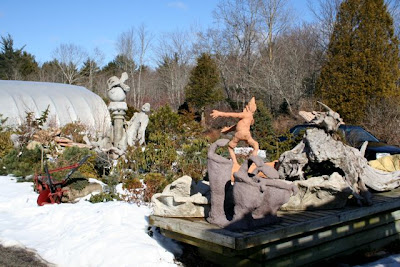 Despite the best attempts of Mother Nature to bury this family of her Nova Scotian children in 78,000,0000,876,907,352,086 snowflakes artfully arranged (as James Alexander-Sinclair so sympathetically counted observed), we felt definitely hints of spring in the air today. Of course, that may be because I fled to the balmy south--shore, that is, of Nova Scotia. To Liverpool, to be exact. Not THAT Liverpool. No Beatles here. Maybe a few aging beatniks, but nary a sign of a Paul or a Ringo.

I love Liverpool. Not only is it a whole zone balmier than our wildness (as a rule, though they've had their share of winter this year), but it's also a lovely historic town. It's also home to one of the most interesting of garden centre operators/plantsmen, Ivan Higgins. Ivan runs Cosby's Garden Centre here in town, and it's appropriate that I mention him because it was he I bought my Hamamelis 'Diane' from several years ago. 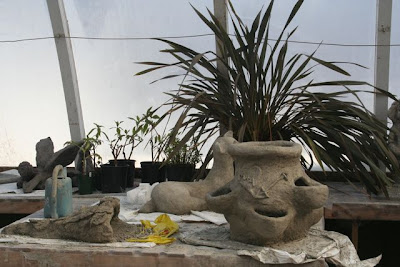 Ivan is an artist in every sense of the word, not only with plants, but with cement, pencil, pen and ink too. He is known for his lifesize (and beyond) concrete sculptures, which are all around the Garden Centre. They are imaginative, whimsical, hilarious, magical, and they make Cosby's a destination even if you're not as besotted with plants as some of us are. 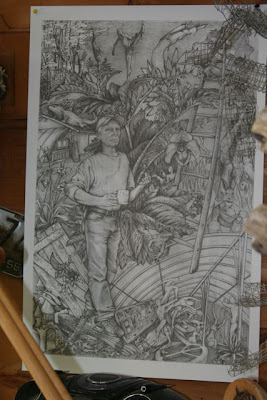 I popped in a couple of weeks ago to say hello, and Ivan proudly showed me a drawing he has been working on for many hours this winter. It encapsulates his life as a nursery operator and artist beautifully, although you'd have to visit and see the drawing AND the nursery in order to appreciate all its details and nuances for yourself. 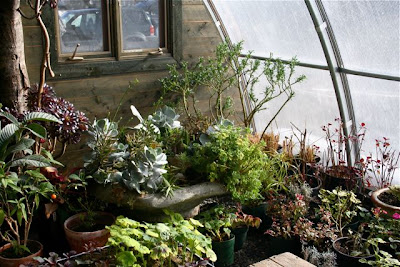 The front of the garden centre is all windows/glasshouse panels, and on a sunny day it's just as nice a place to visit as you could possibly hope to imagine. 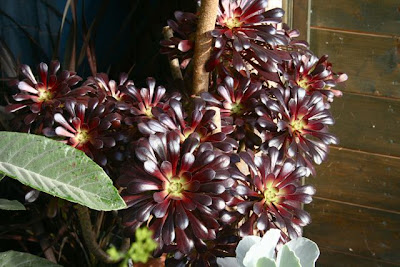 I looked longingly at this handsome aeonium, as mine is feeling very hard-done-by back home, with insufficient sunlight and naughty kitties causing it some distress. 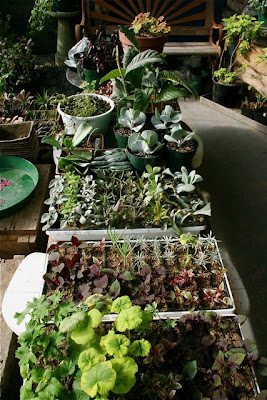 There weren't a huge number of plants for sale at the nursery the day I visited, it being just before Valentine's Day and still plenty early to be carrying too much other than houseplants. A few flats of rooted cuttings were happy to soak up the sun, however. 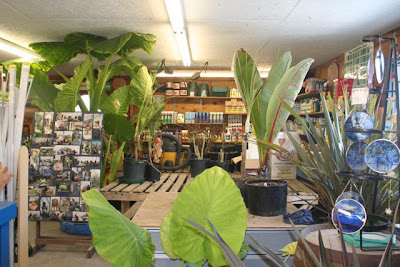 And the big tropicals that stay outside during the summer months are whiling away their winter in the garden centre quite contentedly. Ivan likes to push the zones so he's got a Gunnera (nicknamed Gramma) buried outside under straw and snow, and it's done just fine the past several years. But these plants are far less forgiving so they come indoors until spring remenbers where we are.
I'll have more to say about Liverpool and surrounding areas in coming weeks, as a project I'm involved with has me visiting here every week. And that's not a bad thing at all.