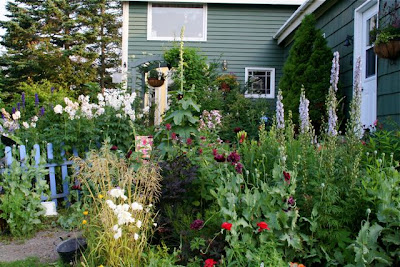 ...winter, of course! You were expecting crocuses, or veggie seedlings? Not here. Not any time soon. I remember when things did look like the photo above. And they will again. But permit me a little more amused grumbling about the weather, please. You'll be amused, and your heart will be warmed too. (click photos for larger image in most cases) 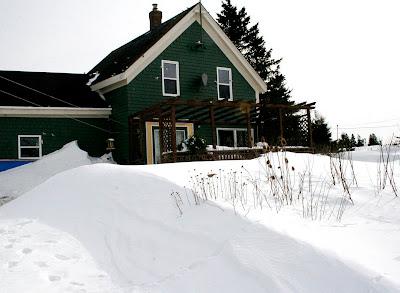 I came home Friday night from the south shore in a gale of wind and 'flurries', which continued on yesterday. Winds out of the west, off the water, made more flurries and sculpted the drifts in the yard higher and higher. 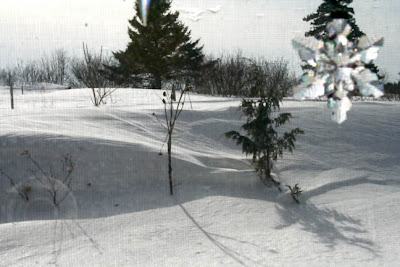 I had thought I'd wallow out through some of the snow and take some photos, but in studying the yard from windows and from the few spots outside where I can walk without floundering, I decided I didn't want to scale 4 and 5 foot snowdrifts with my camera in hand, just to try to get some sense of what it's like for you all. So instead, I took photos where I could safely do so. Like from my office window, where the snow-tsunami is threatening to engulf my weeping Chamaecyparis. 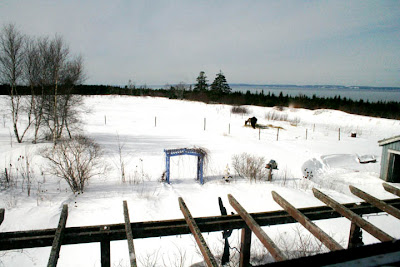 From the back window, you can (sort of) see how the snow sculpts itself around structures, trees, etc. Hubby managed to clear a sort-of path to the pasture to let Leggo and Jenny out, as they've been indoors for several days. The snow was up to Jenny Lumpy-donk's belly even with the horse breaking the trail through first. 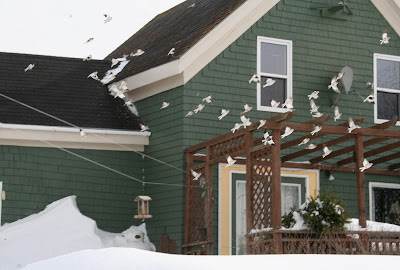 I cheated. I went through the barn and out the back barn door to take this photo, startling my snow bunting friends into flight. 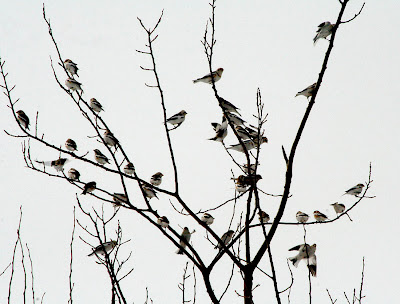 They landed in their tree and sat chittering and twittering and waiting for me to disappear, which I did by getting into the car, rolling down the window, propping up my camera, and waiting. 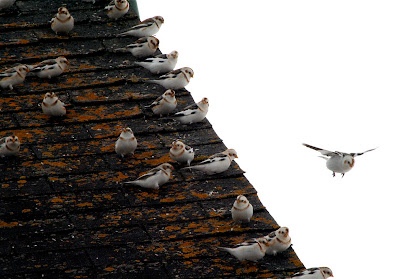 They land on the house, sidle over to the edge of the roof, and discuss amongst themselves whether or not they should drop down to the feeding area. A few of them elect to go first. 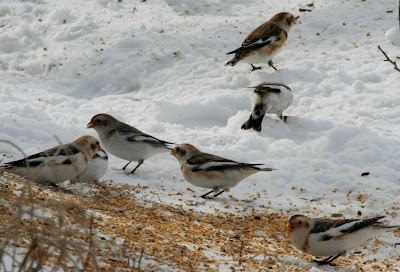 As they snatch up bits of corn and other seeds, they tell their friends to come down and join the buffet... 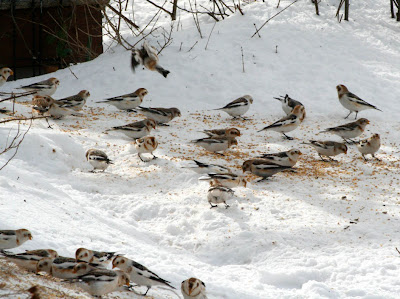 And pretty soon everyone is down there with them. I just sit quietly in the car, snapping photos and grinning a lot, because I know that any second now... 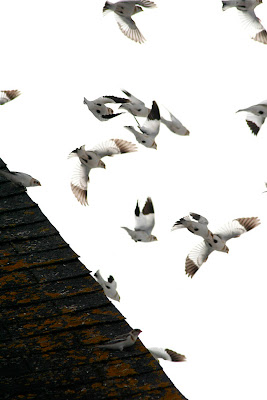 They'll all take off again, and do some aerial acrobatics around the house before returning to the roof of the barn or house to do it all again.
Days like this, when it's mild and calm and the snow buntings and other birds are having fun (or are giving me great joy because they seem to be having fun) are what get us through the bleak days. Like the storm that is due to come in tomorrow. 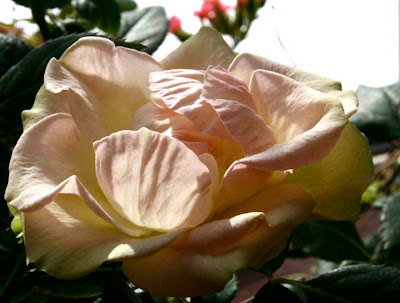 I'll hang out with the cats, the plants, my computer and some hot chocolate tomorrow, and let the weather bring what it may. It's gonna do that anyway, so it's best to just acquiesce and put a good face on it all. That's my usual philosophy, and it helps get us through Yet Another Fundy Winter Weather Tantrum.
At least there's no goutweed at this time of year....