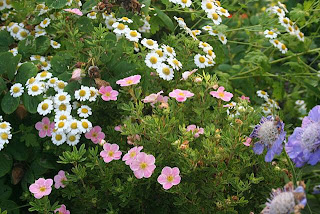 Just about the time I was beginning to think we were trapped in Brigadoon, we emerged from the fog today into hot sunlight and to a wild yard and garden. I was afraid my longsuffering spouse would have to mow and bale the lawn for hay for the horse and donkeyfrommars, but he managed to get through it all--it had been three weeks since he'd been able to mow, and all that moisture...well, let's just say I have a nice supply of mulch for the garden now. When it gets raked up, of course. 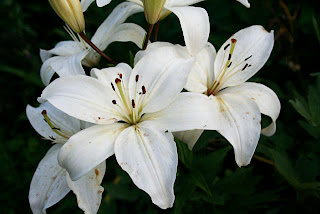 While I was doing some badly needed weeding, deadheading and even planting, I was struck by how lovely the white-flowered plants look in brilliant sunlight. The asiatic lilies shine like stars. The hydrangeas look like puffy clouds or snowflakes. (Ooops, shouldn't say that yet!) White can be a cool, soothing colour. While I don't have a white bed or border a la Vita Sackville-West and Sissinghurst, I like to use white throughout the garden. At dusk, it glows with a light of its own. Of course, in fog it tends to disappear, or flowers turn to soggy tissues (especially some roses) but that's just one of the vagaries of gardening. 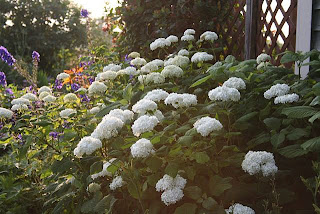 Take a stroll with me around our yard. Make sure you don't mind cut grass getting in your sandals, though. Here's an 'Annabelle'-type of hydrangea; not as big flower heads as that cultivar or of the mopheads, but it flowers very well. I have two of these, and the other one I cut way back this year as it's spreading and has delusions of grandeur, so it has few flowers. This one, however, looks wonderful. 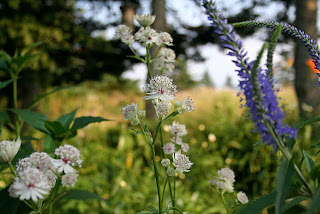 I like astrantia so much, that even though we used it in the previous post on pink, we can pull it into this discussion of white flowers, too. And when I do the next post (on black in the garden)...I have a deep wine coloured one to use there too! 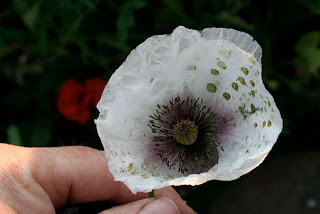 This is just a white annual poppy, one of the Shirleys that selfseeds around here. But the morning dew obviously caught pollen from the plant's stamens and made this fascinating pattern on the petals. 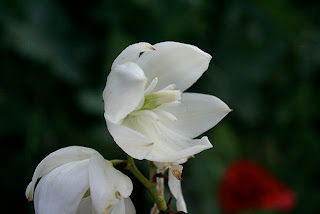 Yuccas are just such terrific architectural plants, aren't they? Surprisingly, they do fine for me here, though they take a while to flower. I planted several given to me a few years ago by a woman from Shelburne in the lower garden where the drainage is good, and they've been very cooperative for me. 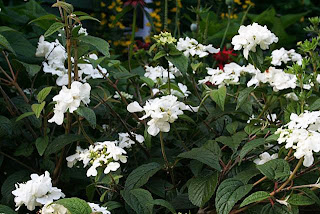 A beloved viburnum, the doublefile 'Maresii'...some call this Summer Snowflake, and it's truly a handsome, graceful plant. Ours is still quite small, but that's not stopping it from flowering like crazy this year. It sometimes throws a few flowers later in the season too. 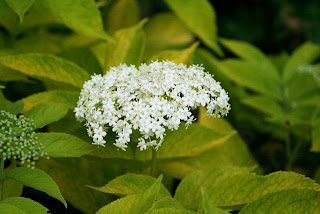 A gold-foliaged elder, but not Sutherland's Gold, which spitefully died after living here for a year. This sambucus, however, has done very well; it's not a huge plant, but I also keep it quite trimmed so as to enjoy its gold colour and keep it in bounds, too. 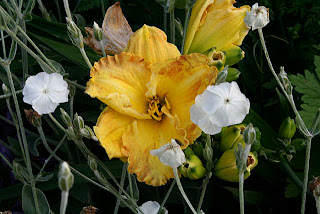 A white rose campion splashes its flowers all over its gangly branches, which are an attractive silver colour. The daylily in the centre of the conversation is currently unnamed (I can't find the label, and need to go visit Wayne and Wayne to find out what it is again, and has lovely large flowers, if a somewhat odd colour. But I like it! 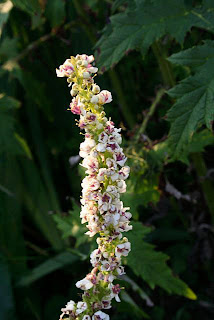 This perennial mullein is one I bought from a now-defunct nursery out in British Columbia about 8 years ago. It self seeds a bit so I never know where it will pop up, and it's not the most handsome of flowers. But again, it's a terrific bee and hummingbird magnet and does well with no interference from me, so I just let it pop up where it will. 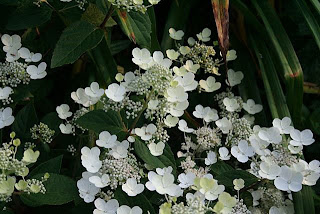 This is Hydrangea paniculata 'QuickFire', one of the Proven Winners Colorchoice shrubs that I'm trialing from last year. The literature said that it blooms earlier than most of the PG type hydrangeas. The literature is correct, because here it is, starting to flower nicely already, whereas Limelight is only starting to think about forming flower heads. I planted this shrub last summer and it settled in brilliantly. I'm hoping that the others planted here will do as well. Hydrangeas tend to do well for me probably because I know what will work here--lacecaps, paniculata, arborescens and even the climbing one, though mine is overwhelmed by our giant clematis. Mopheads, not so much. 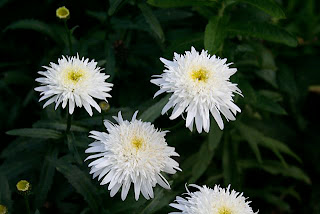 This is a dandy shasta daisy called 'Ice Star'. Now there's another one out called Goldrush that is also doubled, but with golden centre rather than the snowy white seen here. I have THAT one too...shastas are delightful plants and great butterfly magnets.
Which reminds me...we saw the first monarch butterfly of the season up here today. They've been reported elsewhere around the province, of course, but I suspect they got lost in the fog trying to find us earlier than this.